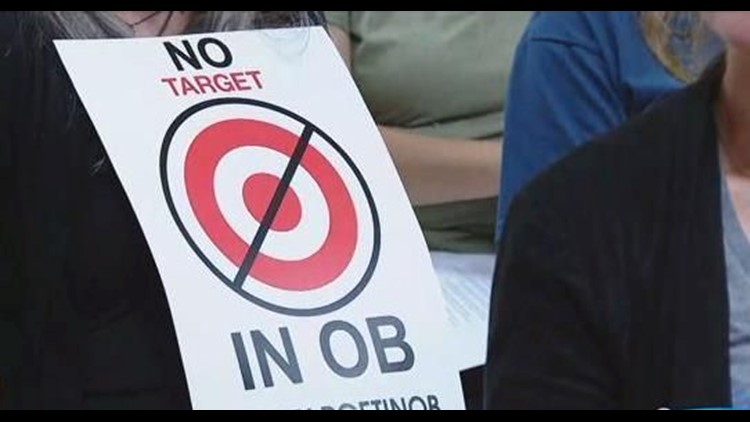 OCEAN BEACH (NEWS 8) - Ocean Beach residents on Wednesday packed the town council meeting to voice their opposition to plans for a Target Express in their neighborhood.

Residents argued the corporate storefront would ruin the character of their colorful community.

Target is looking to put the store at what is now the Newport Avenue Antique Center on the 4800 block of Newport Avenue in the heart of the Ocean Beach district.

The large commercial building has been a staple in Ocean Beach for years, but has been on the market for over a year for $6.5 million.

The property realtor said the owners wanted to preserve the building as an antique shop, but nobody was stepping up to take over and buy it. Further, other businesses could not afford to put down a deposit on the 18,000 square-foot building in the 4800 block of Newport Avenue.

The closest full-size Target store to Ocean Beach is located on Sports Arena Boulevard, about 2.7 miles or a 12 minute drive from the coastal community.

A community rally against the Target Express is planned for next Wednesday, August 30th at 5:30 p.m., on Newport Avenue.

Target released the following statement on the matter:

As Target explores possible locations for new stores, we engage with partners in the community, including the Ocean Beach Town Council, local businesses and community leaders and officials. With Target’s small-format stores, which are smaller than our general merchandise stores, we aim to customize the assortments to fit the needs of the guests in the surrounding neighborhood. At this point, we’re continuing to listen to community feedback that could inform Target’s plans for a small-format store in Ocean Beach. We are not at a point where we have new store plans to share.