A move in Oceanside to end the sales of so-called puppy mills pets was approved by city council Wednesday night. 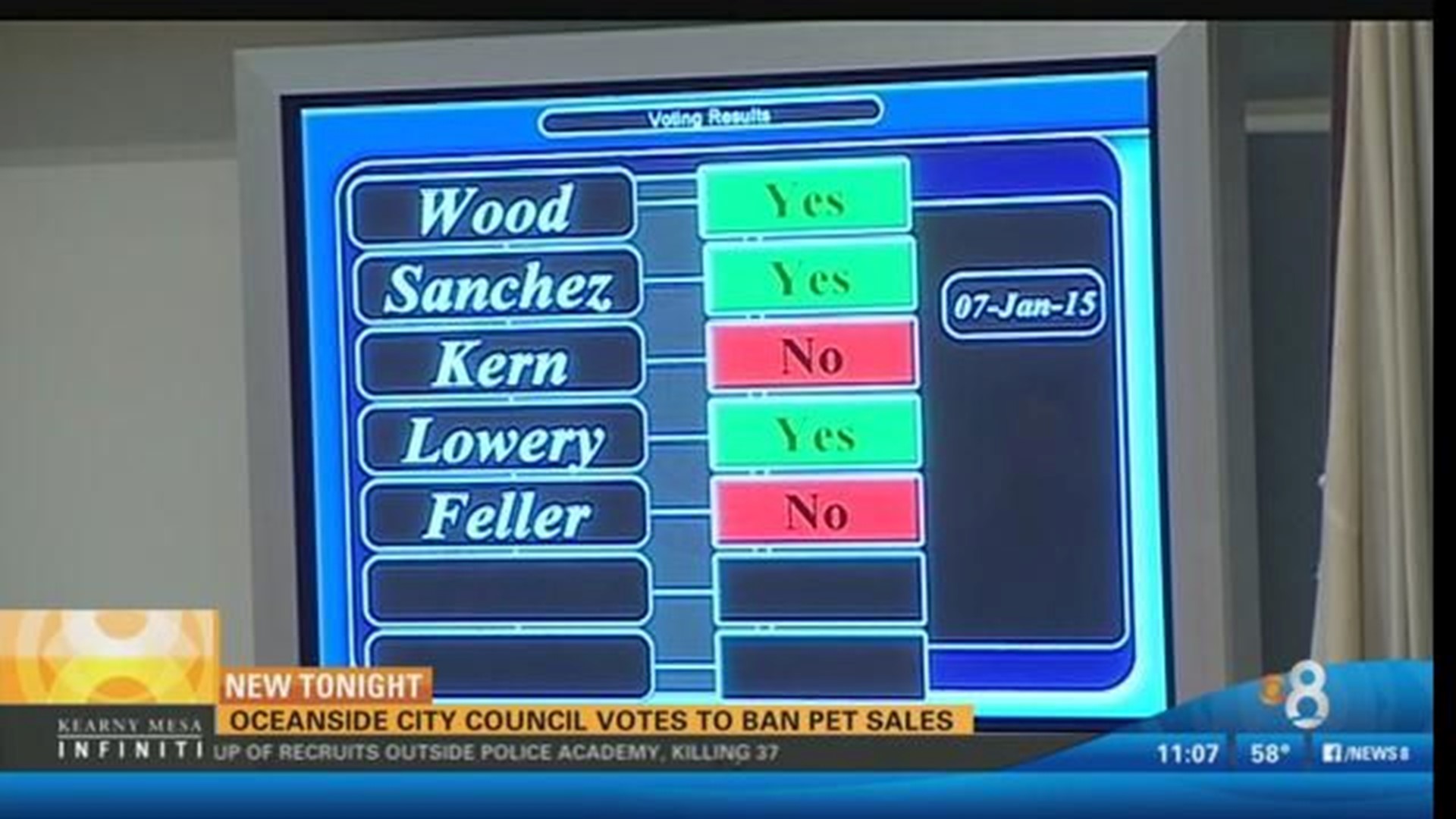 OCEANSIDE (CBS 8 ) – A move in Oceanside to end the sales of so-called puppy mill pets was approved by city council Wednesday night.

A victory for animal advocates hoping to put an end to pet stores selling commercials animals.

The Oceanside City Council approved a ban on the commercial sale of dogs and cats at pet stores.

The number of speakers at the meeting were even on both sides.

“If someone chooses to go to a breeder or a pet store that is their choice, why take it away?” said a pet shop supporter.

Oceanside joins sixteen other cities in California including Chula Vista and San Diego in similar bans. San Diego passed their ordinance in July 2013.

Oceanside Puppy owner, David Salinas, shut his store down in San Diego after it passed a similar law and moved to Oceanside.

"It's really an injustice to the public people should have the right to choose to buy a puppy from legitimate pet store,” said Salinas.

Animal activists have been protesting outside the Oceanside Puppy for months where some of its puppies come from wholesale supplier Hunte Corporation who allegedly gets their dogs from puppy mills.

“I've seen them [puppies] being taken out of this little door from a semi-truck and those poor little puppies are howling and crying. They are so young they don't know what is going on and taken away from their parents too young,” said Donna Hanson, animal activist.

The owner defends his business practices and says he is in good standing with customers. In the hearing Salinas told the council out of the 870 pets from Hunte Corporation customers have returned 10 pets; three had health issues such as a cold and seven had hereditary problems.

“We are a legitimate company and we care about what we do,” said Salinas.

After a 90 minute debate in front of the city council the ordinance to ban the sale of commercial dogs and cats at pet stores was approved 3-2. Esther Sanchez, Deputy Mayor Chuck Lowery and Mayor Jim Wood voted yes and Councilmember Jack Feller and Jerry Kern voted no.

“I can't support this in any way because I think it's just wrong, people should have the right to purchase what they like where they want to buy,” said Kern.

The ordinance has a few exceptions that include allowing dogs and cats at shelters or non-profits to be sold at pet stores.

“This only seems to be the way to regulate this industry,” said Sydney Cicourel, West Coast Dir. for Puppy Mill Project.

The owner for Oceanside Puppy says he may have been pushed out of San Diego but he doesn't plan to leave Oceanside soon.

“I am not going to lay down and do nothing it's not fair to the public,” said Salinas.

Some animal activists are worried about another exception that would allow breeders with a litter of 20 or less to sell to pet stores. They claim these breeders are unlicensed and cruelty can still happen with 5, 10, 20 or 50 dogs.

“It doesn't necessarily suggest you take the cruelty away,” said Judie Mancuso, President of Social Compassion in Legislation. “That is impossible for them to regulate.”

The Humane Society says it supports the ordinance but admits it will be tough to enforce.

Punishment and fines will be approved at a later date.

Federal lawsuits are pending across the country from similar laws passed in other cities. Salinas says he will wait to make a decision on what to do next once a decision is made on a lawsuit.

The council plans to give final approval on January 21st.