Off-duty officer who aided Kyle Kraska: 'It was surreal' 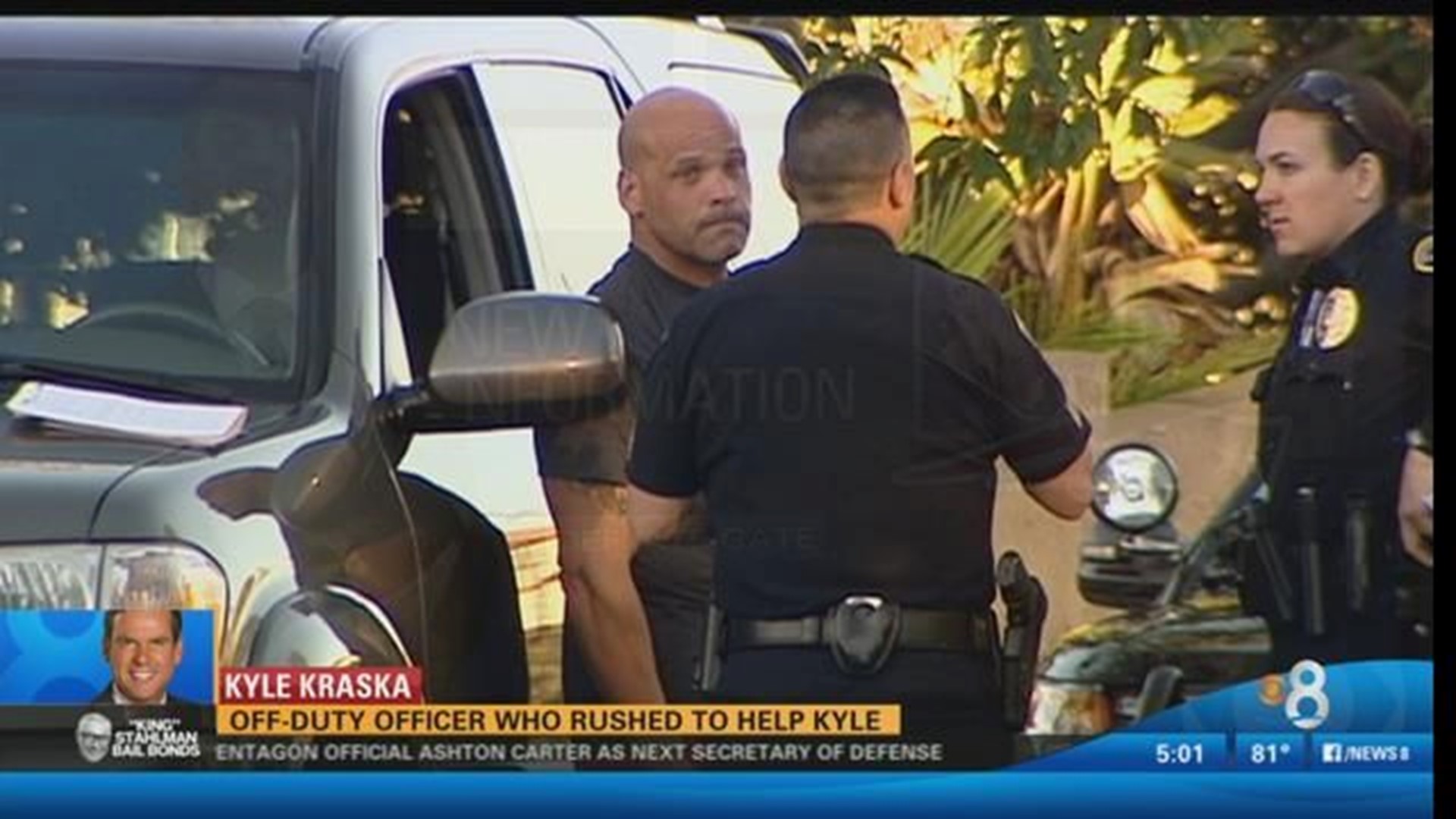 SAN DIEGO (CBS 8) – While
CBS News 8 Sports Director Kyle Kraska
recovers from 10 gunshot wounds, more information is being revealed about what happened right after the shooting.


San Diego Police Sgt. Scott Bartolomei lives just around the corner from Kraska. He was off-duty at the time of the shooting. He says he heard the gunshots and immediately raced to the scene, where he found Kraska on the ground outside his Scripps Ranch home, in desperate need of a miracle.


"I see a male on the ground, and he looked up and said, 'Scott, help me,' and I immediately recognized it to be Kyle," Bartolomei said. "It was surreal, a surreal moment for me. I could smell gun powder in the air and I could see the wounds on Kyle."


Bartolomei says he's known Kraska for about six years, and had just talked to him earlier that day at the gym, making the situation very emotional. But his training immediately kicked in.


"It's very common for gunshot victims to go into shock. Shock will kill you just as easily as a wound will, so I was comforting Kyle, motivating Kyle," he said.


Bartolomei won't say exactly what he and Kyle talked about in those tense moments, but he made sure the tone remained upbeat.


Other officers and an ambulance quickly arrived, increasing Kraska's chances for survival.


Right now he remains in critical, but stable condition and is improving to the point where doctors believe they will be able to start slowly bringing him out of his medically induced coma Thursday night.


"He's got a bit of a road ahead of him, but he's going to pull through. I guarantee we'll see him on TV again," Bartolomei said.


Mike Montana, the man suspected of shooting Kraska, is charged with attempted murder and is being held without bail. He's scheduled to be arraigned on Tuesday.


"The Kraska family would like to extend our deepest gratitude to the wonderful residents of San Diego for the outpouring of support in the wake of this senseless tragedy. We are so grateful to the San Diego Police Department for their thorough investigation, the emergency response teams for their quick action, the Scripps Memorial Hospital La Jolla staff for their amazing care, and the Channel 8 family and viewers for their heartfelt wishes for the speedy recovery for our beloved Kyle.


The love and care was evident from the minute the shooting happened. We have the utmost appreciation for the neighbors, bystanders, most notably Sgt. Scott Bartolomei, first responders and hospital staff who so rapidly came to Kyle's aid.


We've long known Kyle is a tour de force, touching and inspiring everyone he's come into contact with during his 27-year career. It's never been clearer how many people Kyle impacted with his exuberant TV presence and dedicated reporting. The eloquent messages and memories of Kyle have been a definitive source of strength as we attempt to make sense of the situation and continue to monitor Kyle's recovery. Your thoughts and prayers are working. Kyle is healing more and more each day. He will certainly be so touched by all of your words. We look forward to sharing them with him.


We have no doubt Kyle's passion and enthusiasm will help him rise above this tragedy and return stronger than ever. Stay tuned, San Diego. Kyle will be back on air -- with his typical charm and encyclopedic knowledge of sports -- as soon as he's able."