A San Diego police officer was hospitalized Monday with a partially severed leg and broken arm after he collided with a teenage student driver while riding his Victory motorcycle in Alpine, it was rep 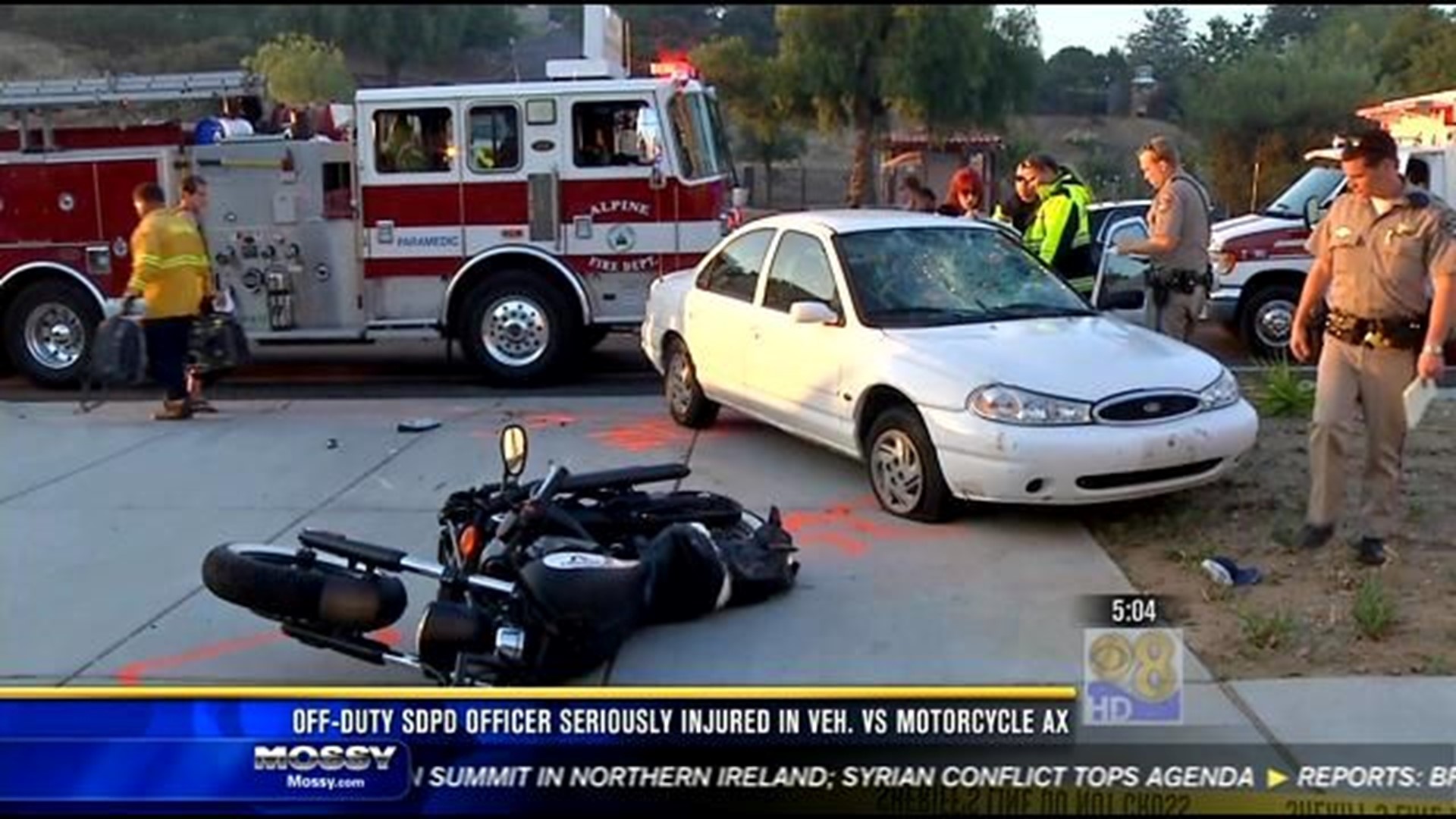 SAN DIEGO (CNS/CBS 8) - A San Diego police officer is recovering in a hospital from severe injuries, including the partial loss of a leg, he suffered in an off-duty weekend motorcycle accident on an East County road.

Sex-crimes Detective James "Chappie" Hunter was riding to the east on Alpine Boulevard when a teenage student driver made a left turn directly in front of him near East Victoria Drive shortly after 7 p.m. Sunday, the California Highway Patrol reported.

The impact threw Hunter, 41, into the windshield of the girl's car, breaking his left arm, severing his left leg below the knee and leaving him with internal injuries. Medics airlifted him to Sharp Memorial Hospital, where he was listed in stable condition Monday.

A picture inside James Hunter's hospital room was posted on Facebook Monday night, showing him smiling and apparently in good spirits. The veteran officer is posing with Chopper the Biker Dog, a well-known local therapy dog.

The image was taken less than 24 hours after Hunter was involved in the motorcycle crash.

Hunter, a fitness enthusiast and married father of a young boy, has been with the San Diego Police Department for 19 years. As part of his current duties, he trains police around the country in techniques to combat domestic human trafficking, said Rollin Bush, spokesman for the San Diego Police Officers Association.

The SDPOA has created a donation fund to help Hunter's family with medical expenses. Anyone wishing to made a tax-deductible contribution is asked to send a check payable to the agency, with "Detective Chappie Hunter" written on the memo line, to the association's offices, 8388 Vickers St., San Diego, CA 92111.

THIS IS A STORY UPDATE. FOR AN EARLIER CBS 8 STORY, READ BELOW.

ALPINE (CBS 8) - An off-duty San Diego police officer was hospitalized Monday with a partially severed leg and broken arm after he collided with a teenage student driver while riding his motorcycle in Alpine.

He was identified as detective James "Chappie" Hunter, a 19-year veteran of the San Diego Police Department, currently assigned to the department's sex crimes unit.

The crash happened Sunday around 7 p.m. on Alpine Boulevard in Alpine.

The CHP says a 17-year-old girl, driving with a permit, made an abrupt turn in front of the officer riding on a motorcycle, resulting in the crash.

Part of the off-duty officer's leg was severed and he also suffered a broken arm. But he was conscious and alert as he was airlifted to Sharp Hospital.

A witness described the horrific scene.

"We saw the guy laying on the ground. I thought he was dead, but he wasn't. I mean but his leg was completely in a wrong, a different spot than he was. It didn't look very good," the witness said.

The CHP says his injuries are not considered life-threatening at this time.

Investigators say it is clear the teenage driver violated the off-duty officer's right-of-way and may be cited.

Her mother was in the car with her at the time of the crash. No one else was hurt.