An investigation was underway Wednesday into the fatal police shooting of a seemingly erratic 30-year-old black man at an El Cajon strip mall -- a shooting that prompted bitter protests from member... 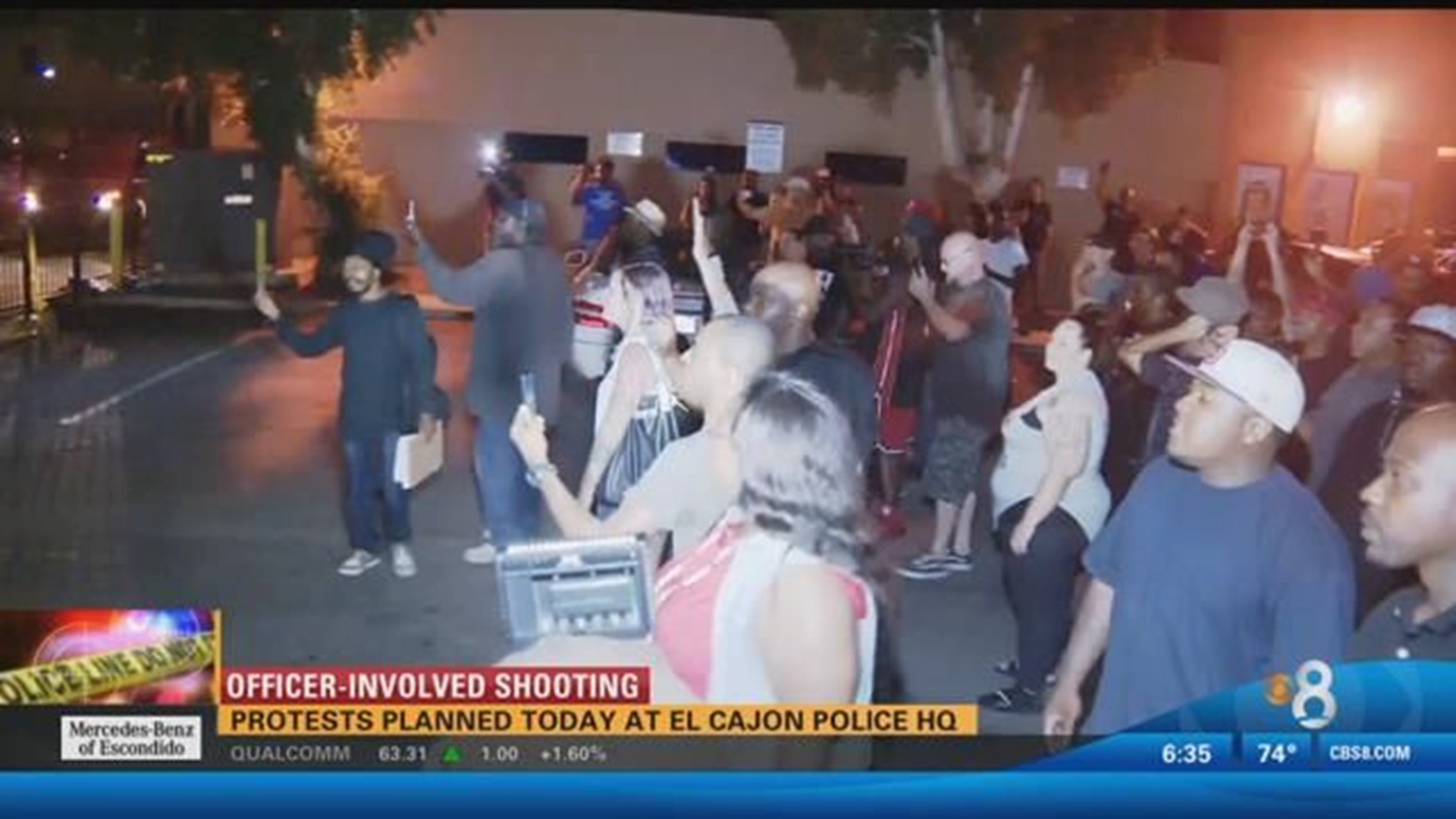 EL CAJON (CBS 8) - Crowds gathered at El Cajon Police Department headquarters Wednesday for a second round of protests over the fatal police shooting of a seemingly erratic 30-year-old black man at an area strip mall.

Demonstrations over the officer-involved shooting of a man identified on social media as Uganda native Alfred Olango formed first at the scene in the 800 block of Broadway Tuesday afternoon and continued at El Cajon police headquarters Tuesday night and Wednesday morning. A vigil is scheduled to be held Wednesday at 6:00 p.m. in front of the El Cajon police headquarters on Civic Center Way.

Protesters characterized the shooting of Olango as being racially motivated.

Several witnesses said the officers were unduly quick to open fire and suggested their actions were influenced by the fact they were dealing with a black man, one they described as mentally challenged. One man told reporters the victim had suffered a seizure just prior to the shooting, and another said he had his hands raised at the moment the shots rang out.

"These senseless killings have to stop - not just in El Cajon but in the entire country,'' community activist Estela De Los Rios said.

Christopher Rice-Wilson of Alliance San Diego said every death of a black man at the hands of police sends a message to the community to "stay in line.'' He attributed Olango's death to "three strikes'' - being black, being mentally ill and not following orders.

"Black lives matter and if a black life doesn't matter, then no life matters,'' Rice-Wilson said.

The events that led to fatal shooting began about 2:10 p.m. Tuesday when officers were sent to investigate a report of a pedestrian behaving erratically and walking in traffic. They came into contact with the man behind a restaurant on Broadway near North Mollison Avenue and he refused multiple commands to remove his hand from his pocket, said El Cajon police Capt. Frank LaHaye.

Because the subject did not comply, the officer drew his firearm and pointed it at the subject while continuing to give him instructions to remove his hand from his pocket according to LaHaye.

The officers attempted to talk to the man while he paced back and forth, but he then "rapidly drew an object from his front pants pocket, placed both hands together and extended them rapidly toward the officer taking up what appeared to be a shooting stance,'' according to the police.

One officer fired his service weapon at the man several times and a second officer deployed a Taser. Bystanders reported hearing about five shots. Olango later died at a hospital.

"That could be my little brother, that could be my twin sister at any time, and I don't know what to do,'' said Mallory Webb of the NAACP's Youth & College Division. "I'm scared to walk the streets every single day.''

Several hours after the shooting, El Cajon police made public a still photo lifted from video taken at the scene showing a man in a shooting stance, although no weapon was recovered at the scene. Some news agencies reported Olango may have been holding an electronic smoking device.

Protesters criticized the release of only one photo, instead of the entire video.

El Cajon Police Chief Jeff Davis told reporters at a news conference Tuesday night the two officers involved in the shooting, each with more than 20 years of service, will be placed on administrative leave for at least three days, as per protocol. He promised a thorough and transparent multi-agency investigation.

Some protesters questioned why officers with special training to deal with the mentally ill were not dispatched. They also called for a federal law enforcement investigation into Olango's shooting.

Some purported witnesses also alleged that cell phones were confiscated from bystanders at the scene. LaHaye said no phones were taken other than one that was voluntarily turned over by an employee at a nearby restaurant.

"This was the only phone provided to officers in this investigation,'' LaHaye said. "No other phones were taken from witnesses.''

Police officials also said via Twitter that no phones were confiscated from anyone at the scene and asked the public to "be careful about reacting to inaccurate information.''

Despite that claim, the reports prompted a response from the American Civil Liberties Union of San Diego & Imperial Counties. Its executive director, Norma Chavez-Peterson, noted that confiscating witnesses' phones violates the First and Fourth Amendments of the U.S. Constitution.

She said the agency would be "paying close attention as the details of this situation unfold.''

Police asked that anyone with additional information contact them at (619) 579-3311. Individuals with information on this incident who wish to remain anonymous can call the Crime Stoppers tip line at (888) 580-8477.