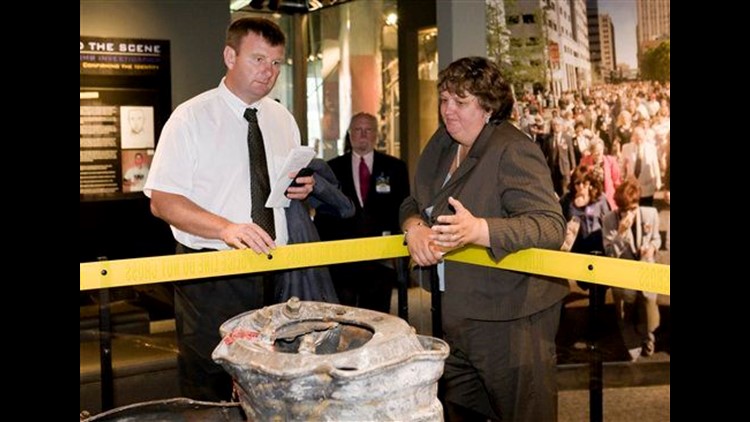 OKLAHOMA CITY (AP) — An Oklahoma City bombing survivor and a family member of one of the blast's 168 victims shared their stories Wednesday with a broadcaster from Norway, drawing parallels between the 1995 attack and a deadly bombing and shooting spree in Norway that killed at least 76 people.

Former state Rep. Susan Winchester, whose sister, Dr. Margaret "Peggy" Clark, was killed in the bombing of the Oklahoma City federal building, told Norwegian Broadcasting Corp. that her sister's death was emotionally devastating but that her family became stronger over time as it worked to care for Clark's three young daughters.

"These are very dark days, but they will get brighter," Winchester told executive news correspondent Jon Gelius during an interview inside the Oklahoma City National Memorial & Museum, near the former site of the Alfred P. Murrah Federal Building.

Like the Oklahoma City bombing, the suspect in the attack in Norway wanted to create fear and terror among its citizens and bring the nation to its knees, she said.

Gelius told The Associated Press during a break in the taping that he wanted to speak to people impacted by the Oklahoma City bombing because Norwegians who are struggling with the shock and loss of the terror attacks there need to know they can recover.

"Someone has gone on that path before us," said Gelius, who is based in Washington. "Hold hands — Oklahoma City recovered from the terror attack 16 years ago. We need to fight back."

Bombing survivor Melissa McLawhorn Houston said her life was largely a blur for a year following the bombing as she struggled with the guilt of having survived the terrorist bomb that killed so many others.

"Why me? Why am I worth saving?" said Houston, an assistant state attorney general. 'It's OK to be angry and to be scared."

At the time of the blast, Houston worked inside the building that now houses the bombing museum and said she and others helped co-workers evacuate the heavily damaged structure.

"All of a sudden, everything just changed in an instant," she said. "It always felt like something evil had happened."

For months afterward, the sense of loss and the emotional impact of the bombing made even the simplest tasks difficult, she said.

"As the people of Norway will learn, it is literally a moment after another," Houston said. "Getting out of bed in the morning is an amazing accomplishment."

The July 22 bombing in Oslo has drawn parallels to the blast in Oklahoma because both involved domestic terror plots in which a government building was attacked with a homemade bomb made of ammonium nitrate fertilizer and fuel oil.

Authorities say the Norwegian suspect, Anders Behring Breivik, has confessed to detonating a truck bomb outside a building that housed the offices of Prime Minister Jens Stoltenberg, killing eight people, before travelling to an island youth camp 25 miles from the Norwegian capital and shooting 68 more people to death.