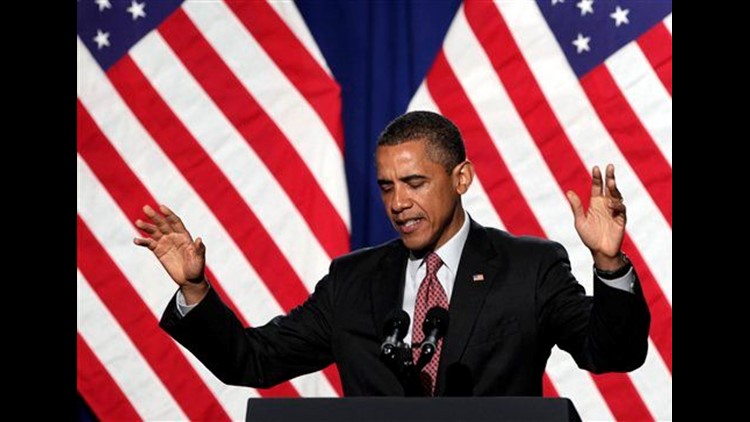 The presidential motorcade crisscrossed Manhattan as Obama worked his way through three events that raised money for the Democratic Party and his 2012 campaign. Key Obama fundraisers have been asked to raise $60 million for that effort by the end of June.

The fundraisers included an event on the Broadway stage, where Obama was to speak to supporters who bought tickets, starting at $100, to watch a performance of the musical "Sister Act."

The fundraisers were part of a two-day trip that took Obama away from Washington as Republicans pulled out of debt-reduction talks and pressed the president to take a more active role in the negotiations.

Obama opened his fundraising trip with a quick stop at the upstate New York military base Fort Drum, where he defended his freshly unveiled plans to bring 30,000 troops home from Afghanistan.

But in New York City, Obama's agenda was all about raising money and urging ambivalent supporters to open their wallets again, even though they may be dissatisfied with some of his policies over the past two years.

At a high-dollar dinner at the exclusive New York restaurant Daniel, Obama urged his supporters to recapture the enthusiasm from the 2008 campaign, even though he's now "old news."

"I know it's not going to be exactly the same as when I was young and vibrant and new," he said.

Obama also turned to some of his celebrity supporters to help bring in the money.

At a fundraiser for gays and lesbians, Obama was championed by actors Neil Patrick Harris of the television show "How I Met Your Mother" and Jane Lynch of "Glee." Later, Obama planned to duck into the Broadway Theater for the end of "Sister Act" so he could speak to donors. Actress Whoopi Goldberg, one of the show's producers, was to be at the event.

With Obama's 2012 campaign kicking into high gear, advisers are privately telling donors that they hope to match or exceed the $750 million raised in 2008. Some estimates say the 2012 re-election campaign could pull in $1 billion.

Republicans were quick to criticize Obama's fundraising blitz through Manhattan.

"While President Obama tries to escape the pressures of his failed economic policies with a fundraiser in New York, millions remain out of work and are beginning to realize that the only job our president is concerned about is his own," said Ryan Tronovitch, spokesman for the Republican National Committee.

From New York, Obama was heading to Pittsburgh, where he was to speak at a manufacturing event Friday morning.

The money raised at Thursday's events go to the Obama Victory Fund, a joint fundraising account by the DNC and Obama's campaign.

At Victory Fund events, the first $5,000 on a donor's contribution goes to the presidential campaign and the remainder goes to the DNC, up to a maximum of $30,800 a year.