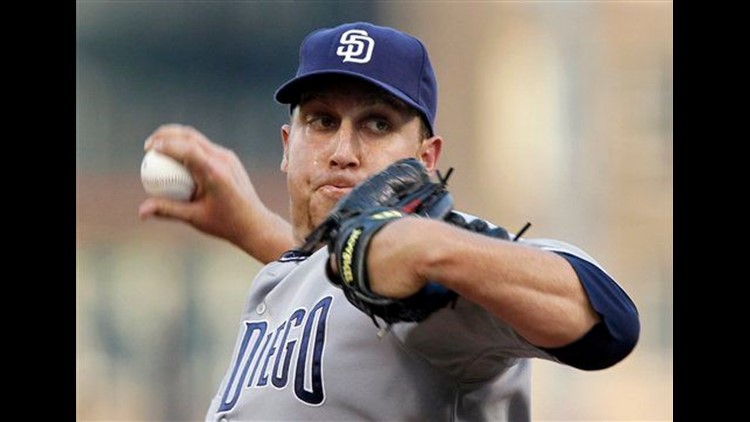 PITTSBURGH (AP) — Chase Headley watched Jeff Karstens issue a bases-loaded walk to Jason Bartlett, and he knew exactly what to do.

"I'm going up there looking for something early in the count," said Headley, who capped San Diego's six-run fourth inning with a drive to right-center for the Padres' first grand slam of the season. "I go up there with the idea of what I want to hit and where I want to hit it."

Kyle Blanks, Aaron Cunningham and Jesus Guzman also homered for the Padres, who have won seven straight games at PNC Park. Luis Martinez had three RBIs and Will Venable drove in two runs.

San Diego came in ranked last in the NL in runs and homers.

"You ask anybody, they'll tell you hitting's contagious," Blanks said.

"It's definitely something everyone wants to do, and it really became a case tonight where everyone did get involved."

The Pirates were tied for first place before losing on a controversial call in the 19th inning in Atlanta on July 26. They are 1-10 since and fell eight games behind Milwaukee.

"We need to step up. We know it. We've talked about it," Pittsburgh manager Clint Hurdle said. "We need action now, and we need to find a way to fight through the hard part of the season."

It was the highest scoring game of the season for the Padres and the most runs allowed by Pittsburgh this year.

Headley's homer gave San Diego the lead for good, allowing Aaron Harang (10-3) to get the win despite allowing 13 hits in five innings.

The crowd of 37,766 was Pittsburgh's 13th sellout of the season, but the Pirates lost for the eighth time in their past nine home games. The Pirates have allowed 14 home runs while falling to 0-5 on this homestand.

"It's the big leagues: If you pitch the ball down the middle, they're doing what they're supposed to do with it," Karstens said. "I just think we've got to be better than what we are, and we're not doing that right now. We've got to make adjustments, because if not, it's not going to be fun the next two months."

Karstens (8-6) entered with the fifth-lowest ERA in the majors at 2.49, but he was charged with more earned runs (nine) in 3 1-3 innings Friday than he had allowed in his past five starts combined.

"I couldn't pinpoint what I was doing wrong, but I put it all on my shoulders," Karstens said. "I expect to be better than that."

Headley's homer was his fourth of the season and gave him a career-high five RBIs. It also was San Diego's first grand slam since Adrian Gonzalez hit one on Aug. 26, 2010.

Blanks and Cunningham each had a solo shot for their first homers of the season. Guzman added a two-run homer in the eighth.

Harang won for the sixth time in seven decisions and rebounded from his only loss since May 2. Only once in 252 previous starts, however, had Harang allowed more hits.

"Sometimes, that's how it works," he said. "When I was making good pitches, they were getting the ball to fall in at times. Obviously, our offense came out swinging and those guys were ready to play and helped me out."

Five days after being acquired in a trade from the Padres, Ryan Ludwick went 4 for 4 for the Pirates. Garrett Jones reached five times as Pittsburgh lost by 10 despite having as many hits as San Diego and coming up one hit short of a season high.

The Pirates did leave a season-high 16 men on base. Pedro Alvarez was a primary culprit: he tied a Pirates record by grounding into three double plays. He also struck out and committed an error.

"I really like the way our guys kept playing through the entire nine innings," Padres manager Bud Black said. "Our pitching wasn't at the top of its game but we ended up making pitches when we needed to."

NOTES: Venable (back spasms) was in the lineup for the first time in a week. ... Padres OF Chris Denorfia (strained right hamstring) worked out before the game and is expected to return soon. ... Pittsburgh 1B Derrek Lee did not play for the second consecutive game after being hit by a pitch in the left hand Wednesday night. ... Padres INF/OF Brad Hawpe underwent season-ending surgery on his left elbow in San Diego. ... LHP Paul Maholm starts for the Pirates on Saturday. He is 0-3 lifetime against the Padres.