Two people were killed Monday when a roughly 75-foot- tall tree fell onto a two-story house in the Point Loma Heights area. 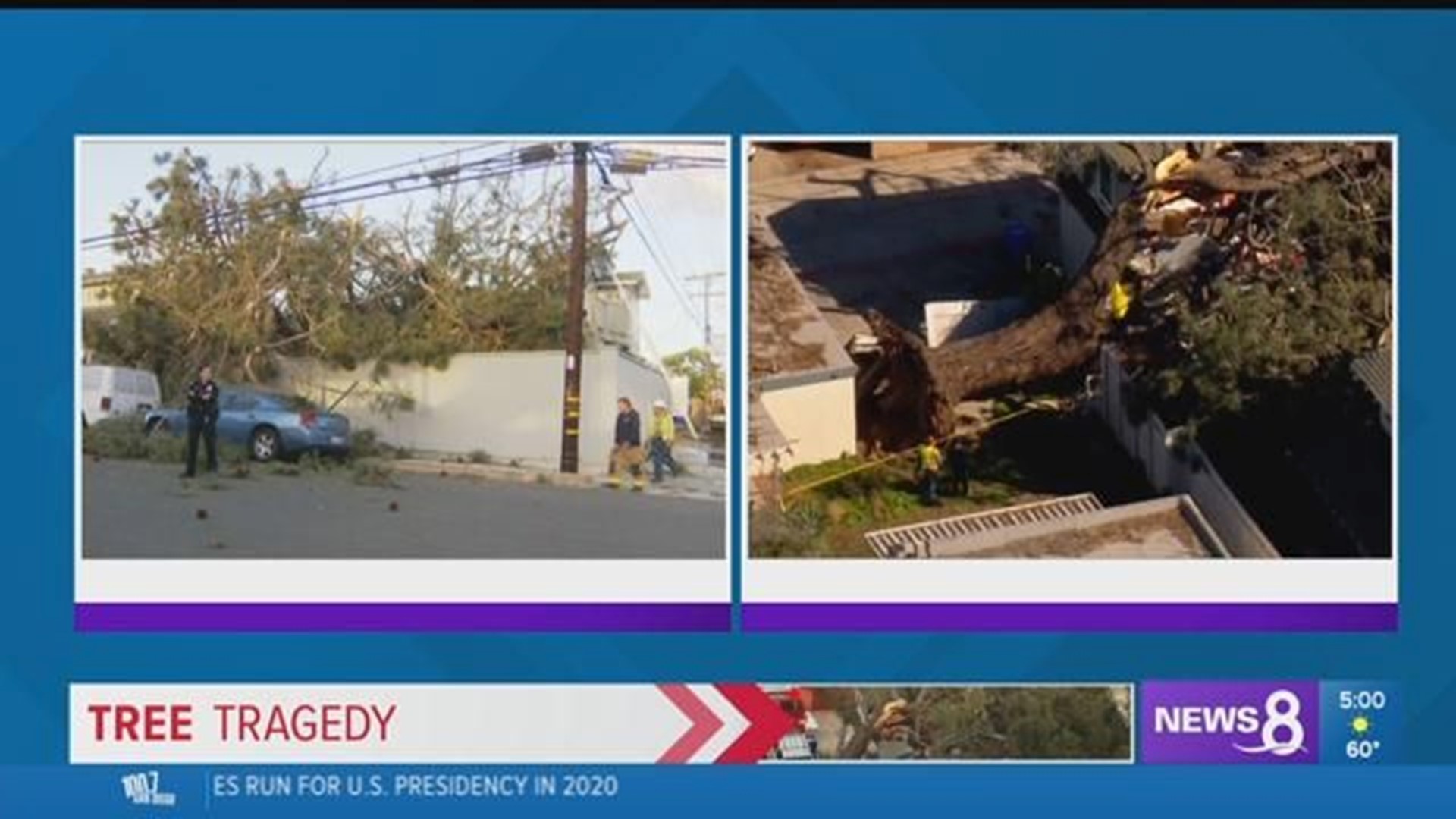 Two people were pronounced dead at the scene, Ballard said.

A fellow business owner from Grand Forks, North Dakota, identified the victims as Troy and Jessica Nelson – owners of Trojan Promotions. She also said an uninjured person in the home was Jessica’s brother Ryan Langerud.

The couple’s identity was also confirmed by Troy’s sister, according to the Grand Forks Herald.

Police confirmed that the couple was likely asleep in bed when the tree crashed through the rough without warning. It is suspected they died instantly.

The website VRBO.com has a listing for a home that appears to be the one involved in the tragic tree fall. The listing for the 1,000-square-foot, two-story house has almost 80 reviews on it. A phone call to the person named as the owner went unanswered.

San Diego Gas & Electric crews were called to the scene to repair some downed power lines and shut off gas to the home, Ballard said.

The tragic incident has also raised concerns about other potential tree dangers around the county. News 8's Brandon Lewis spoke with one expert about what may have gone wrong and what locals should know about trees in their own yards.

Arborist Kurt Peacock looked at the roots of the tree that fell in Point Loma Heights and said, like most incidents, there was a series of events that led up to it falling - starting with an oversize tree.

"Big trees need big yards and I don’t recommend planting a Torrey Pine unless they’ve got a half acre or more to allow the tree to get good roots into the soil," said Peacock.

He also recommends trees get routine care - for most that's between every two to five years - especially for an older tree that once stood tall.

"Oftentimes, some judicious or periodic pruning can help, but won't eliminate the risk for failure," said Peacock.

He also said he believes the tree was weakened by the recent rain conditions. With the strong winds, Peacock said that's enough to topple a tree.

After the tree fell, News 8 viewers called and wrote in about wanting to remove neighbors' trees for fear of them falling on homes.

Peacock stressed the importance of getting expert advice first.

"What we don’t want this to do is cause people to panic and everyone doubting the beautiful, lovely trees that they have in their homes and yards," said Peacock. "They should be periodically inspected and cared for."

Between inspections he suggests keeping a close eye on the soil of the base of the tree.

"If there's any heaving or buckling of soil that's a sign of real instability," said Peacock. "You should probably call an arborist to come out and look."

There are also questions about who could possibly be legally responsible for the incident. News 8's Abbie Alford spoke to an insurance attorney.

"The house with the tree is likely the most responsible," said insurance attorney Michelle Burton with Shoecraft Burton, LLP.

The tree was in a neighboring home's backyard and several neighbors told News 8 they had been worried about the tree falling and believed it hadn't been trimmed.

In the past when the city wants to cut down a Torrey Pine on city property because of safety reasons it causes controversy among those who want to save it.

"Potentially, if they did know and there was a paper trail and they didn't do anything to maintain that tree that could raise coverage issues," said Burton.

She said there could be many factors in this tragic case.

"If it was caused by wind, it is typically a covered peril under the policy, so you're going to likely get coverage, unless there's an 'act of God' exclusion," said Burton.

"VRBO may not have any liability in this situation," said Burton.

VRBO and Airbnb were contacted for comment on this issue but did not respond.

Chopper 8 over the Point Loma Heights area where a massive tree fell onto a home overnight, killing two people. (Jan. 21, 2019).