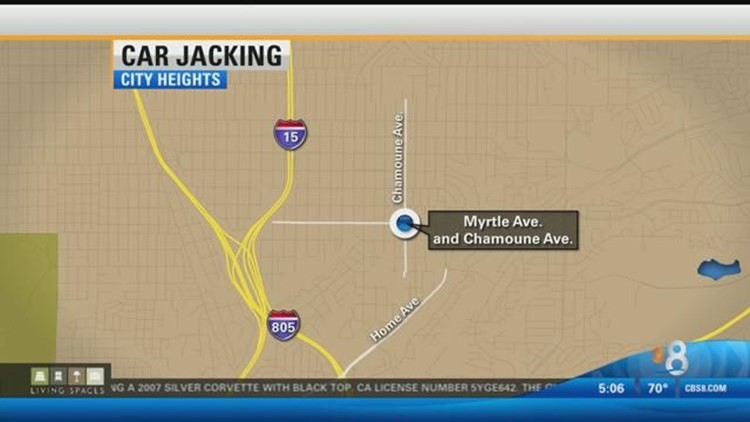 Two suspects pulled a motorist from his vehicle and drove off with the car during a carjacking in Fairmont Village Saturday night.
Author:
Published: 12:33 PM PDT June 7, 2015
Updated: 2:55 AM PDT June 8, 2015

SAN DIEGO (CNS/CBS8) - Two suspects pulled a motorist from his vehicle and drove off with the car during a carjacking in City Heights Saturday night.

The victim, a 30-year-old man, was driving a gray Chrysler 300 eastbound on Myrtle Avenue near Chamoune Avenue at 9:15 p.m. Saturday when one of the suspects jumped in the middle of the street trying to get the motorist to stop, said San Diego police officer Robert Heims.

The motorist drove around the suspect and got stuck behind some cars. The motorist then pulled over and tried rolling his window up. The first suspect and another man ran up to the driver's Chrysler and started punching him through the open window, Heims said, demanding that he give them the car.

The motorist was able to run away from the suspects, who took the car and left in an unknown direction, he said.

One suspect was described as a thin, clean shaven 6-foot Latino man approximately 29 years old who was last seen wearing a black hoodie and jeans.

The second suspect was described as a 34-year-old thin, clean shaven Latino man with both arms covered in tattoos and armed with a machete-type knife. He was last seen wearing a green shirts and jeans.

Anyone with any information regarding the carjacking was asked to call Crime Stoppers at (888) 580-8477.