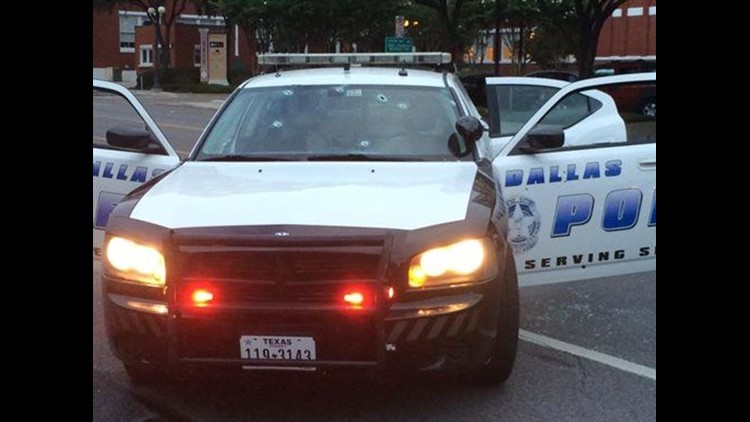 A man suspected of spraying Dallas Police Headquarters with gunfire early on Saturday has been found dead in a van after a police sniper shot him and pipe bombs found in the vehicle were exploded, ...
Author:
Published: 7:36 AM PDT June 13, 2015
Updated: 6:58 AM PDT June 14, 2015

DALLAS (AP) — A man suspected of spraying Dallas Police Headquarters with gunfire early on Saturday has been found dead in a van after a police sniper shot him and pipe bombs found in the vehicle were exploded, a police spokesman said.

Authorities said it was remarkable that no one else was killed or injured in the attack, which left the headquarters and police vehicles nearby riddled with bullet holes.

Dallas Police Spokesman Maj. Max Geron posted on the department's Twitter account that the suspect was found dead in the vehicle but said the man's identity could not be confirmed pending medical examination.

The police sniper shot the suspect following a standoff of several hours in a restaurant parking lot in the suburb of Hutchins, where he had fled.

Investigators found a package containing pipe bombs in the parking lot of the headquarters building and thesuspect told police negotiators that he had explosives in the van, police said. Police used a camera-equipped robot to inspect the vehicle.

When authorities exploded the pipe bombs, they contained lots of shrapnel including screws and nails, Geron said.

Investigators believe the man acted alone, even though early witness reports suggested there could have been as many as four attackers.

Cellphone video shot from a balcony or roof near the headquarters building showed the suspect's dark-colored van ram a squad car as gunshots rang out.

Bullets pierced the glass of the headquarters entrance and caused damage inside, including at the front desk, where the employee on duty had gone to get a soft drink immediately before the bullets started flying, policesaid.

Police Chief David Brown said the suspect had identified himself as James Boulware and told police that he blamed them for losing custody of his son and "accusing him of being a terrorist."

Investigators were still not sure of his name, adding that he could have been lying earlier.

Anita Grendahl was asleep in her 7th floor apartment in a high-rise across from police headquarters when she heard gunshots loud enough to wake her up over a white noise machine in her room.

"We just woke up to a few pops and thought somebody was on my balcony, and then looked outside and saw the van crash into the car," she said.

Ladarrick Alexander and his fiancée, Laquita Davis, were driving back toward the police station to their nearby apartment when they heard 15 to 20 gunshots in quick succession.

Seconds later, police could be seen swarming an unmarked van that appeared to have crashed into a policecar, they said.

They turned around and were parked outside the police perimeter about two blocks away, where they heard the sound of one detonation at about 4:30 am and smoke coming up in the air.

Police headquarters is in a former warehouse district where a boutique hotel and several new apartmentbuildings have been opened.

"We don't see too much going around here at all," Alexander said.