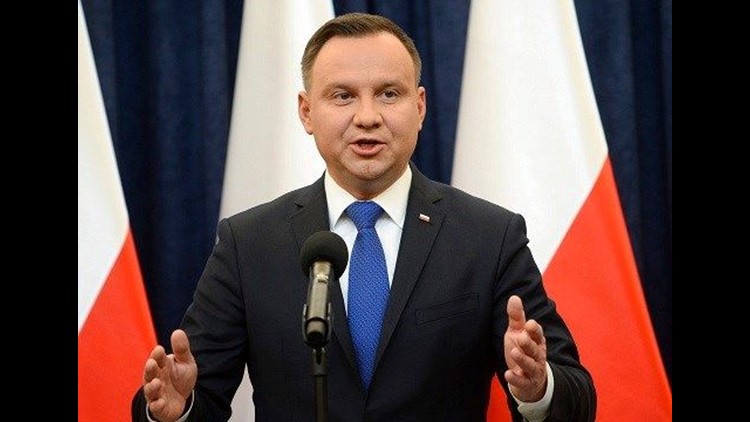 WARSAW, Poland (AP) — Poland's president on Tuesday signed legislation that outlaws blaming Poland as a nation for Holocaust crimes committed by Nazi Germany, defying both criticism from Israel and a warning from the U.S.

But in a move that appeared designed to soften the impact of his decision, President Andrzej Duda said he would also ask Poland's constitutional court to evaluate the bill — leaving open the possibility it would be amended.

As currently written, the legislation calls for prison terms of up to three years for falsely attributing the crimes of Nazi Germany to Poland. The law takes effect 14 days after it's officially published, but it wasn't immediately clear when that will be.

Poland's authorities have described it as an attempt to protect the country's reputation from what it believes is confusion about who bears responsibility for Auschwitz and other death camps Nazi Germany set up in occupied Poland. They say it was modeled on anti-defamation laws in many other countries, including laws criminalizing Holocaust denial.

The proposed law has fueled a diplomatic crisis with Israel, which fears it would stifle discussion about the Holocaust and enable Poland to whitewash the role of the Poles who killed or denounced Jews during the German occupation of Poland during World War II.

Israel's Foreign Ministry said Tuesday that it would continue to communicate with Poland despite its reservations about the law. It said it hopes Duda's decision to ask the constitutional court to evaluate the bill will allow both sides to "agree on changes and corrections."

Duda acknowledged there were doubts about the legislation's intent, leading some observers to interpret his request for a constitutional review as a way to save face while calming the storm.

But critics say it was a diversionary tactic.

Slawomir Neumann of the centrist Civic Platform party accused Duda of giving in to the pressure of nationalists and anti-Semites and said his signing "deepens the diplomatic crisis."

Neumann, head of the party's parliamentary caucus, also described the constitutional court as a body without independence that will rule as the governing party wants.

The United States also strongly opposed the legislation, warning that it could hurt Poland's strategic relations with both Israel and the U.S.

Holocaust scholars and institutions have strongly denounced the law as well, arguing that its unclear wording creates the potential for abuse. Polish officials note that a provision in the law exempts historic research and works of art.

Polish officials have long argued a Holocaust speech law is needed to fight expressions like "Polish death camps" for the Nazi camps where Jews and others were exterminated.

Defending the law, Duda said it would not prohibit Holocaust survivors and witnesses from talking about crimes committed by individual Poles.

"We do not deny that there were cases of huge wickedness," he said in a speech.

But he said the point of the law is to prevent the Polish nation as a whole from being wrongly accused of institutionalized participation in the Holocaust. He recalled that the Polish government at the time had to go into exile and Polish officials were those who struggled to inform the world that the Germans were putting Jews to death on Polish soil.

"No, there was no systemic way in which Poles took part in it," Duda said.

The legislation hasn't only sparked a bitter dispute with Israel. It also has caused division within Poland, where anti-Semitic rhetoric moved quickly from the political fringes into the mainstream over just a few days.

Beata Mazurek, the spokeswoman for the conservative Law and Justice and a deputy parliament speaker, tweeted a quote by a Catholic priest who had said that the Israeli ambassador's criticism of the bill "made it hard for me to look at Jews with sympathy and kindness."

Many conservative lawmakers and commentators are now accusing Israelis and American Jews of using the issue as a pretext for getting money from Poland for prewar Jewish property seized in the communist era.

Jerzy Czerwinski, a senator with the ruling party, said on state radio Monday that he saw a "hidden agenda" in the opposition.

"After all, we know that Jewish circles, including American, but mostly the state of Israel, are trying to get restitution of property or at least compensation," he said.

On Monday evening, a small group of far-right advocates demonstrated in front of the presidential palace demanding that Duda sign the law. They carried a banner that said, "Take off your yarmulke. Sign the bill."

The bill first was proposed about two years ago, soon after Law and Justice took power in 2015, but hadn't been an issue of public debate recently. Many people were surprised when lawmakers suddenly approved it on Jan. 26, the day before International Holocaust Remembrance Day.

Jan Grabowski, a historian at the University of Ottawa in Canada who studies Polish violence against Jews during the war, called Duda's signing of the law "further proof that the nationalists now in power in Poland will do anything to cater to the hard, right-wing core of their electorate."

"Unfortunately, it is not only the nationalists but also the whole Polish society which will have to pay the price," said Grabowski, who is also a member of the Polish Center for Holocaust Research in Warsaw.

Aron Heller and Josef Federman in Jerusalem contributed to this report.