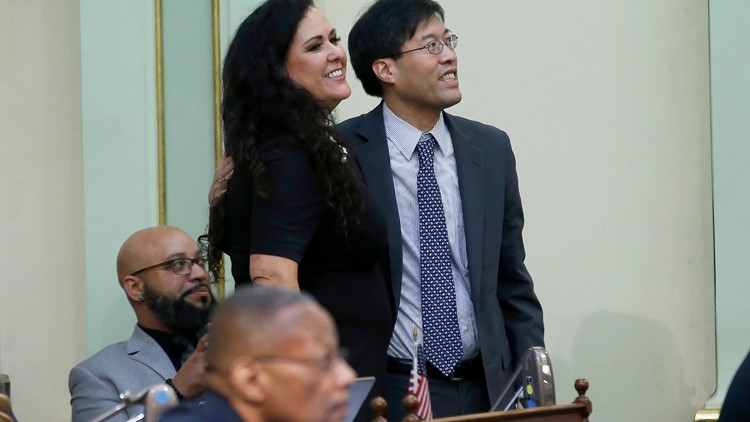 Photo by: AP
State Sen. Richard Pan, D-Sacramento, smiles as he and Assemblywoman Lorena Gonzalez, D-San Diego, watch as the votes are posted for his measure to tighten the rules on giving exemptions for vaccinations was approved by the Assembly in Sacramento, Calif., Tuesday, Sept. 3, 2019. The Assembly approved the bill SB276, that would give state public health officials oversight of doctors who give more than five medical exemptions annually and schools with vaccination rates less than 95%. It still needs a final approval in the state Senate. (AP Photo/Rich Pedroncelli)

SACRAMENTO, Calif. — Gov. Gavin Newsom is seeking last-minute changes to one of the most controversial bills facing California lawmakers, a measure designed to crack down on doctors who sell fraudulent medical exemptions for vaccinations.

The measure would allow state public health officials to investigate doctors who grant more than five medical exemptions in a year and schools with vaccination rates of less than 95%.

The governor is seeking amendments making it clear that enforcement will start next year. They would also remove a requirement that doctors swear under penalty of perjury that they are not charging fees to fill out medical exemption forms.