Donald Trump and Ted Cruz battled for the edge Saturday in a four-state round of voting in the fractious Republican presidential race, with Cruz claiming an early primary lead in Kansas. Democrats ... 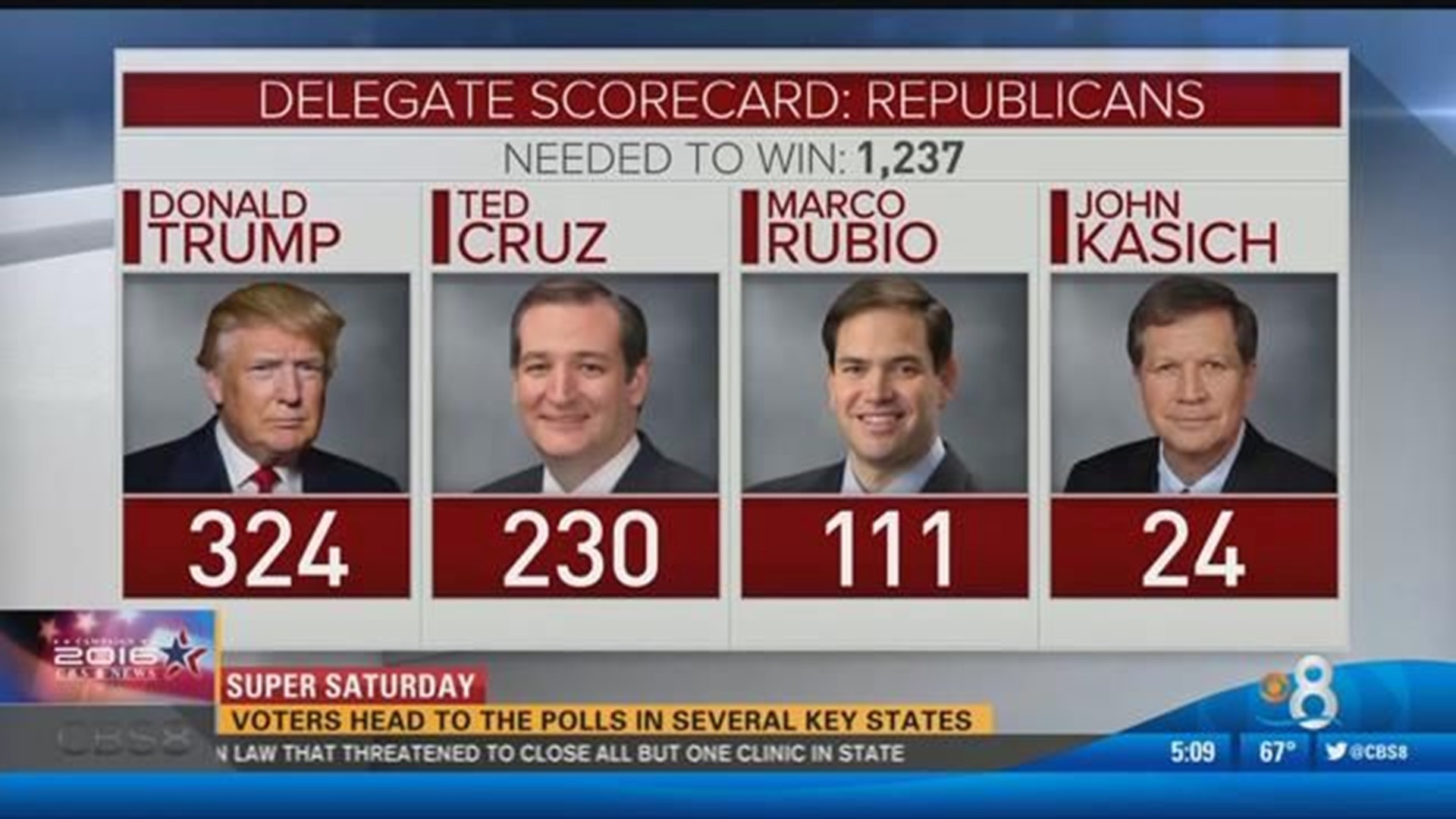 WICHITA, Kan. (AP) — Ted Cruz cinched double-barreled victories in Kansas and Maine, and Donald Trump captured Louisiana in Saturday's four-state round of Republican voting, fresh evidence that there's no quick end in sight to the fractious GOP race for president.

"God bless Kansas," Cruz declared during a rally in Idaho, which votes in three days. "The scream you hear, the howl that comes from Washington D.C., is utter terror at what we the people are doing together."

The Texas senator defeated Trump easily in Kansas and Maine, and Trump rolled to victory in Louisiana, underscoring that his appeal knows no geographic limitation. Early returns showed Cruz and Trump were in a tight race for Kentucky.

Cruz, a tea party favorite, attributed his strong showing to conservatives coalescing behind his candidacy, calling it a "manifestation of a real shift in momentum."

With the GOP race in chaos, establishment figures frantically are looking for any way to derail Trump, perhaps at a contested convention if no candidate can get enough delegates to lock up the nomination in advance. Party leaders — including 2012 nominee Mitt Romney and 2008 nominee Sen. John McCain — are fearful a Trump victory would lead to a disastrous November election, with losses up and down the GOP ticket.

"Everyone's trying to figure out how to stop Trump," the billionaire marveled at an afternoon rally in Orlando, Florida, where he had supporters raise their hands and swear to vote for him.

Despite the support of many elected officials in Kansas, Florida Sen. Marco Rubio came up short, raising serious questions about his viability in the race. Cruz suggested it was time for some Republican candidates to quit the race.

In Maine, Cruz won by a comfortable margin over Trump. Republicans and Democrats also were voting in Louisiana on Saturday.

On the Democratic side, meanwhile, Sanders won by a solid margin in Nebraska and Kansas officials said he'd won the state caucuses, giving him seven victories so far in the nominating season. Clinton, who's been doing well with African-American voters, had an easy win in Louisiana.

With Republican front-runner Trump yet to win states by the margins he'll need in order to secure the nomination before the GOP convention, every one of the 155 GOP delegates at stake on Saturday was worth fighting for.

Count Wichita's Barb Berry among those who propelled Cruz to victory in Kansas, where GOP officials reported extremely high turnout. It was Cruz' fifth win of the nominating race. Cruz had won Alaska, Oklahoma, Iowa and his home state of Texas.

"I believe that he is a true fighter for conservatives," said Berry, a 67-year-old retired AT&T manager. As for Trump, Berry said, "he is a little too narcissistic."

It was anger that propelled many of Trump's voters to the polls.

"It's my opportunity to revolt," said Betty Nixon, a 60-year-old Trump voter in Olathe, Kansas. She said she liked the businessman because "he's not bought and paid for."

Overall, Trump had prevailed in 10 of 15 contests heading into Saturday's voting. Rubio had one win in Minnesota.

Rubio and Ohio Gov. John Kasich both pinned their hopes on winner-take-all contests on March 15 in their home states.

On the Democratic side, Clinton hoped that strong support among African-Americans in Louisiana would propel her to victory. Vermonter Sanders, trailing far behind Clinton in the delegate count, had higher hopes of making progress in Nebraska and Kansas, where the Democratic electorate is less diverse.

Tara Evans, a 52-year-old quilt maker from Bellevue, Nebraska, said she was caucusing for Clinton, and happy to know that the former first lady could bring her husband back to the White House.

"I like Bernie, but I think Hillary had the best chance of winning," she said.

Heading into Saturday's voting, Clinton had 1,066 delegates to Sanders' 432, including super delegates — members of Congress, governors and party officials who can support the candidate of their choice. It takes 2,383 delegates to win the Democratic nomination. There were 109 at stake on Saturday.

Clinton and Sanders both campaigned in Michigan, a sign of the importance both attach to the state's primary on Tuesday.

Clinton met with about 20 African-American ministers in Detroit and said "the future" of the Supreme Court was on the ballot in November's general election.

Sanders, at a rally in suburban Warren, stressed his opposition to "disastrous" trade agreements that he said cost U.S. jobs. He's hoping his emphasis on reducing income inequality plays well in a state hit hard over the years by shifting economic trends and globalization.

In the overall race for GOP delegates, including partial results for Kansas, Trump led with 347 and Cruz had 267. Rubio had 116 delegates and Kasich had 28.

Cruz will collect at least 36 delegates for winning the Republican caucuses in Kansas and Maine, Trump at least 18 and Rubio at least six and Kasich three.

It takes 1,237 delegates to win the Republican nomination for president.