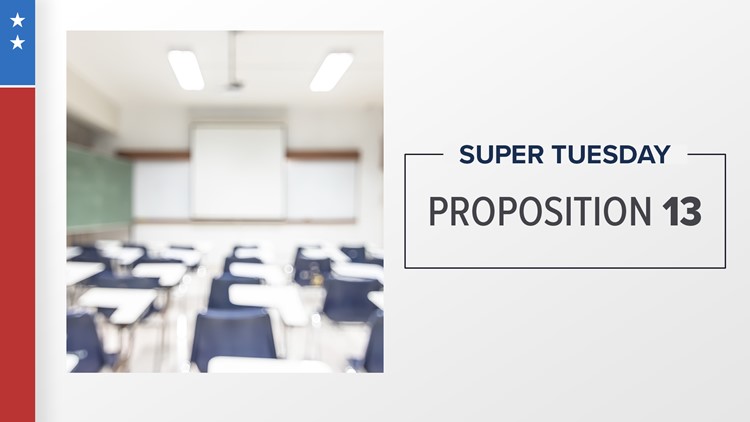 CALIFORNIA, USA — Californians voted on the widely talked about Proposition 13 on Tuesday. Voters were deciding if the state should borrow $15 billion for school infrastructure. This would include K-12 schools, community colleges, and universities. It was the only statewide proposition in California's primary.

UPDATE as of March 4, 2020, 8 p.m.: As of Wednesday night, 7% of precincts still needed to be counted but early numbers projected that the proposition would not pass.

UPDATE as of March 3, 2020, 11:35 p.m.: According to the Associated Press, the vote was too close to call Tuesday evening for the only statewide measure on California's primary ballot: a $15 billion bond to repair and modernize aging schools, many of which are more than a half-century old and have issues ranging from leaky roofs and old wiring to toxic mold. In early returns, “no” votes are leading but the margin could tighten as the night wears on. About $9 billion of the Proposition 13 money would go to K-12 schools. Priority would be given to addressing health and safety concerns, including removing asbestos.

It has the same number as Proposition 13 of 1978, but that is a coincidence. The two propositions are different and unrelated. This is because, in 1998, California began “resetting” proposition numbers back to “1” every 10 years. The numbers were reset in 2018 and will reset again in 2028.

According to the Secretary of State’s voting guide, supporters argued that the proposition will fund essential repairs to make California public schools safer and healthier. This includes the removal of toxic mold and asbestos from aging classrooms. Gov. Newsom supported Prop 13.

However, others were concerned that Prop 13 will eventually lead to increased property taxes.

“This measure authorizes $15 billion in borrowing, costing taxpayers $27 billion including interest, to build and repair schools,” said the Howard Jarvis Taxpayers Association in Sacramento. “Borrowing is nearly twice as expensive as paying for school construction from the regular budget, which has a huge $21 billion surplus. This is just more government waste.”

According to the Secretary of State, if Californians vote “NO” on Prop 13, the state could not sell $15 billion in general obligation bonds to fund education facility projects. The state also would not make changes to school districts’ and community college districts’ existing local borrowing limits or the existing rules for school districts to levy developer fees.

If it passes, $9 billion will go to K-12 schools. According to the proposition, the priority is on health and safety concerns, including earthquake risks, and removing toxic mold and asbestos from aging classrooms and lead from drinking water.

RELATED: VERIFY: Is a repeal of Prop 13 on the March ballot?