The county is only offering 235 sites for in-person voting because of the increased effort to cast ballots by mail. They will be open Oct. 31 through Election Day. 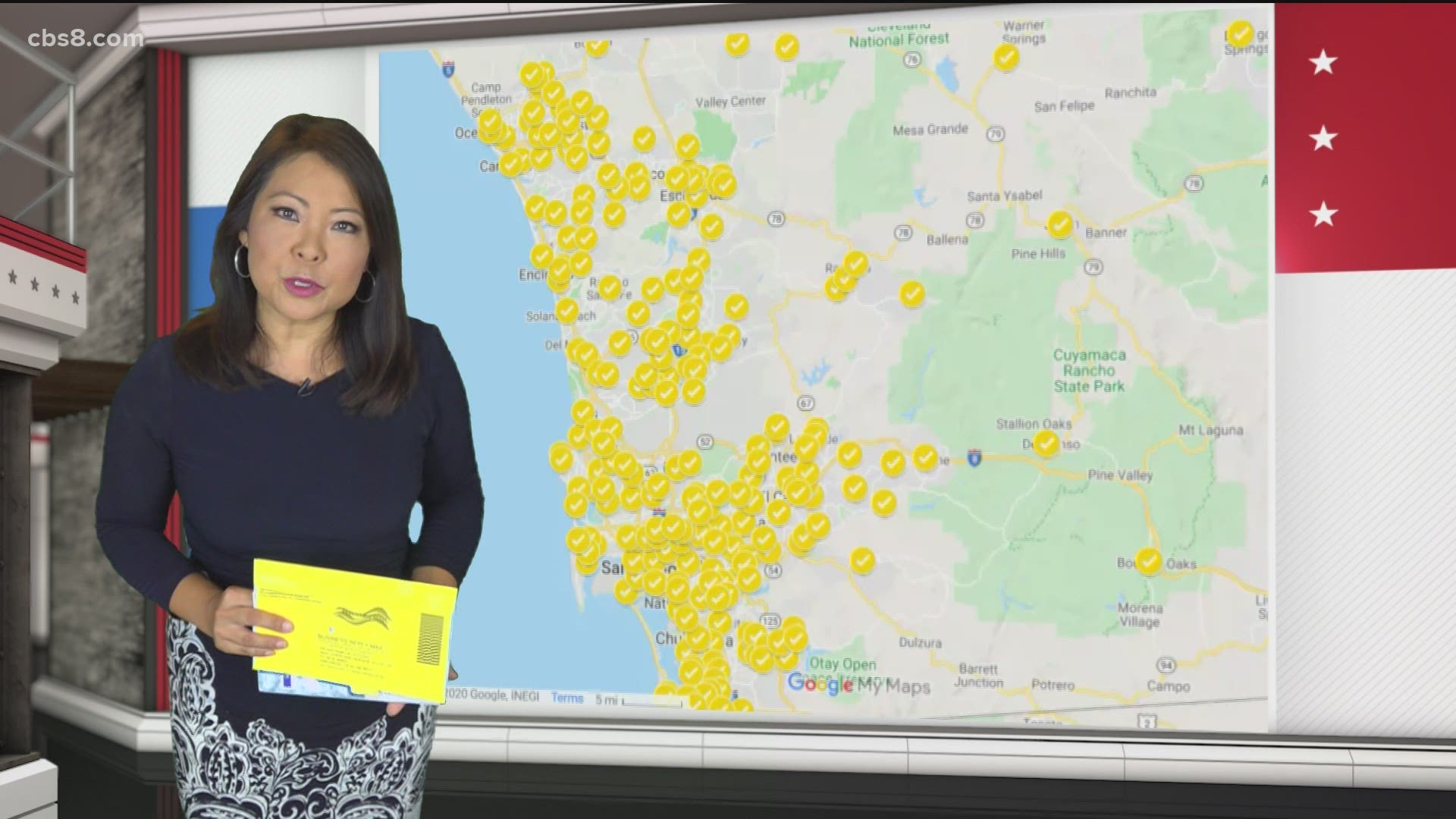 SAN DIEGO — There has been a lot of talk about mail-in ballots nationally, and on Tuesday, San Diegans were able to drop theirs off for the first time. One hundred twenty-six different ballot drop off locations opened across the county.

All 126 locations can be found here. Many of the locations are at libraries where registrar staff will accept ballots. This election is the first time all libraries within the City of San Diego will serve as drop-off locations for the entire four-week period prior to Election Day. Previously, only larger branches offered the service for a week before the election.

“The library seemed to be a good fit because we're a trusted institution. We are in every neighborhood in the city and we could offer 36 facilities towards the effort,” said Joe Miesner, a supervising librarian with San Diego Public Library.

The drop-off service is in addition to resources libraries have offered for years to help voters register and learn about the various questions on the ballot. Voters may use any of the 126 sites to return their ballot.

Returning a ballot by mail or at a drop-off site is the registrar’s preferred method during the pandemic. About 75% of registered San Diego County voters already vote by mail. This election, all nearly 1.9 million registered voters will receive a ballot starting this week.

Voters can also mail their ballots back through the postal system.

The registrar is reminding people they do not need to put a stamp on the envelope no matter which way the ballot is sent back. 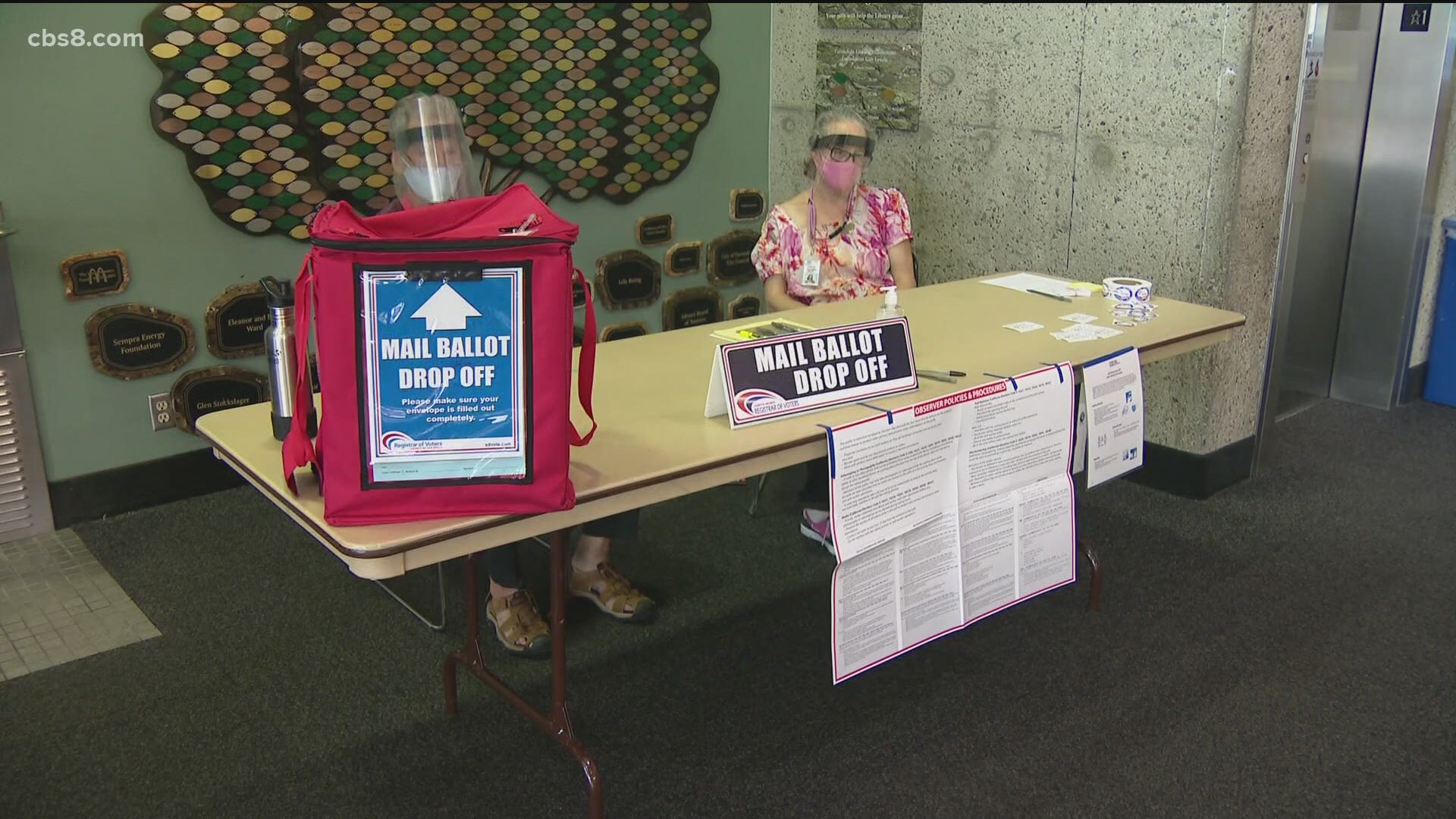 Proponents of mail-in balloting say the benefits include safety, privacy and the elimination of standing in long lines. Lines that will get longer as we get closer to Election Day.

California Secretary of State, Democrat, Alex Padilla said, “These attacks on the integrity of elections serve nothing else than to undermine the confidence in the election which voters should have.”

The county is only offering 235 sites for in-person voting because of the increased effort to cast ballots by mail. The polling locations are not open yet and are different than drop-off sites.

Note: While the News 8 map below gives you a general idea of polling sites near you the San Diego Registrar of Voters says you must vote at your assigned polling place.

You can find your assigned polling location on the back of your sample ballot and voter information pamphlet or by visiting this page on sdvote.com. It's important to double-check your voting location as it has likely changed from where you have voted in the past.

The registrar also anticipated a reduction of available poll workers because nearly half of the previous workers were over the age of 65, who are most at-risk of coronavirus, and college students, who are not attending classes locally during the pandemic.

The registrar also decided to only use public sites for in-person voting because it found many previously used private venues did not have the infrastructure to support physically distanced booths.

“Who's going to want to take the potential liability of the largest election that we conduct in a four-year cycle and the crowding that would occur and people potentially being exposed inside a person's facility like that? So that's the reason why we strategically said let's use public locations, much larger locations over a four-day window so we can spread voters out here,” said Michael Vu, San Diego County’s registrar of voters. “It is a Herculean task putting this election together. What we're doing generally takes four to six years to plan out. We're really doing this in a four to six-month window.”

How to vote by mail:

✅Seal your voted ballot inside your postage paid return envelope

✅Return to a trusted source