Re-tally for election to begin Friday at 9 a.m.

The race is almost on to count the state's 5 million votes by hand by Nov. 20. 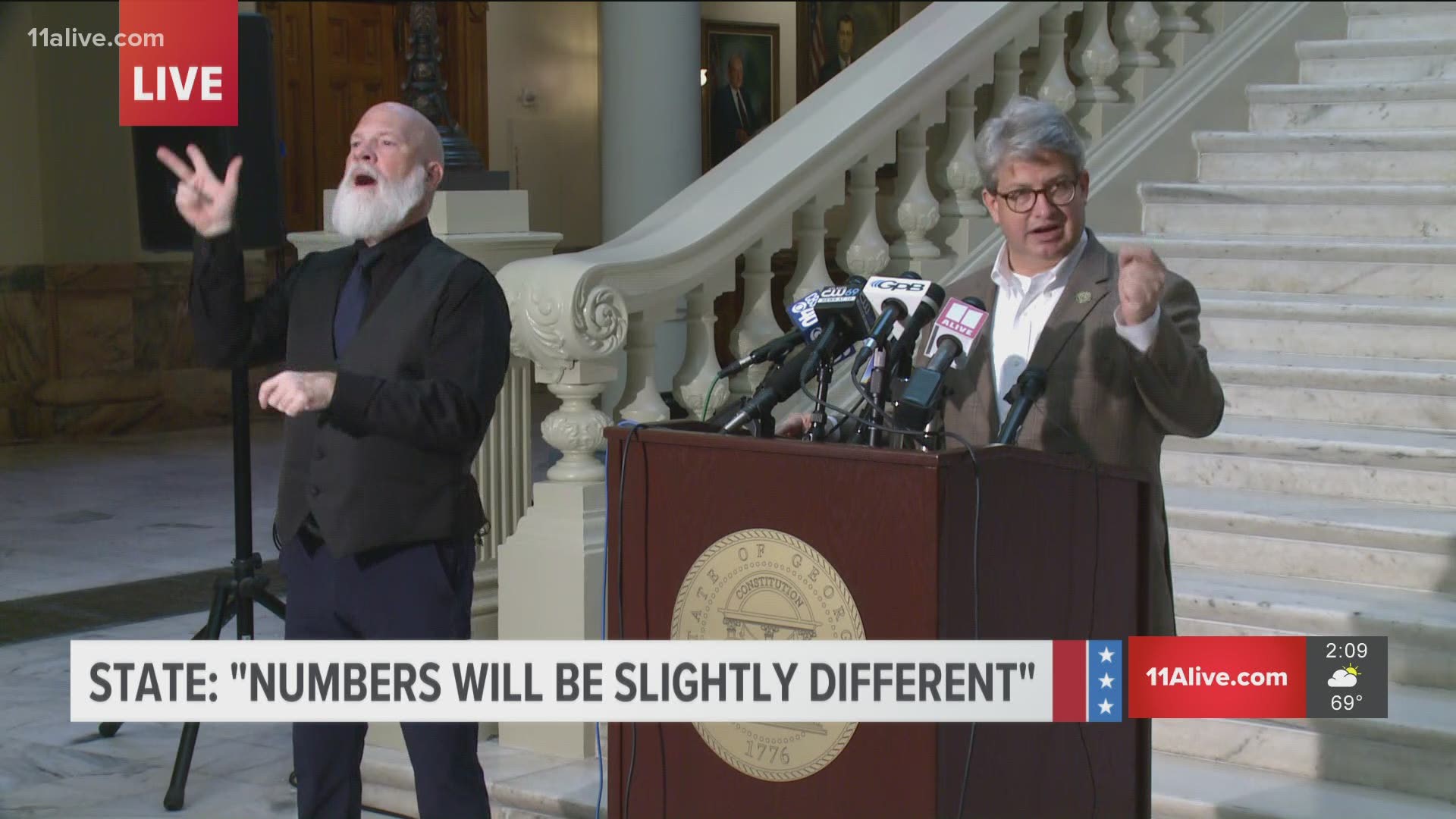 ATLANTA — A Friday deadline to complete their counts and certify their results is bearing down on Georgia's counties, with some already making preparations for the hand recount ordered yesterday by Georgia's Secretary of State, Brad Raffensperger.

On Thursday, the Secretary of State's Office said that recount will begin at 9 a.m. tomorrow, with a target of midnight next Wednesday to complete it.

It will be a race to see if all of the Peach State's 5 million votes can be counted by hand in time to meet the that deadline.

Then, once that is complete and the secretary certifies the statewide result, by law the losing presidential candidate will then be able to request an official machine recount if the margin is still within a half a percent, which by all indications it will be.

If you're doing the math - yes, that means Georgia will likely have two recounts.

We'll keep you updated throughout the day on developments in the never-boring Peach State.

9:50 p.m. | DeKalb Voter Registration and Elections has outlined how it plans to handle the audit of the election.

As COVID-19 cases continue to rise nationally, DeKalb officials said they are partnering with the DeKalb County Board of Health to help establish best practices to keep staff and observers as safe as possible.

To help accommodate the need for social distancing, the county plans to use the old Sam's Club building on Turner Hill Road to re-tally the votes. They plan to have two shifts with about 150 tabulators at each shift.

In addition to social distancing, there will be required PPE for DeKalb personnel, mask mandate for all observers, disinfecting between shifts, and temperature checks required upon entry.

7:45 p.m. | Fulton County plans to handle it's audit of the lection at the Georgia World Congress Center. Officials said they plan to begin audit preparations on Friday, Nov. 13 and the audit itself will begin on the following day at 7 a.m.

The plan is to continue the audit daily through Wednesday, November 18, from 7 a.m. until 5 p.m. daily.

4:45 p.m. | Sens. Kelly Loeffler and David Perdue announced this afternoon they were introducing the "SAFE" Act (Securing America's Future Elections and Votes) to "to create a bipartisan commission to review the 2020 election and report to Congress with recommendations to strengthen election integrity going forward."

4:20 p.m. | Here's a look at the argument Gabriel Sterling in the Secretary of State's Office was making earlier about the justification for a hand recount of Georgia's presidential votes:

"If it were 14K votes the other way, we'd do the exact same thing." @GabrielSterling says he hopes #Georgia audit & re-tally will put to rest mis-info & conspiracies. When "emotionally tied to an outcome - anything you see that feeds your belief...you believe."👇#11Alive pic.twitter.com/PYxYT5rxQQ

3:10 p.m. | Sterling also addressed one argument that has been raised: The Secretary of State's Office went to some lengths to purchase and equip a new voting system for this election - why was that necessary if now they're going to count it by hand to make sure it worked right?

"'You’ve been telling us now for over a year we can trust counts of machines,' and guess what we stand by that statement, because it’s the truth," Sterling said. "We anticipate this audit will bear that out."

There were groups before the election that were making the argument for the vote to be done by paper ballot.

The Secretary of State's Office seems to be arguing, in part, that this recount is possible at all because of how the new machine system created paper printouts of every vote that will make a hand recount functional.

2:50 p.m. | One thing to note - the Secretary of State by law had the discretion to choose any statewide race to conduct the audit on, and he chose the presidential race. That race is too close to conduct a traditional audit on using a statistically representative sample of ballots from around the state, so they're doing a full hand recount.

Their argument is that it was the right race to choose, rather than an easier one, because it would best dispel any further doubts about the election outcome.

"If we had chosen to do what would have been an easier risk-limiting audit... it would have probably undermined confidence in the presidential election," Gabriel Sterling said Thursday.

He said they were considering this choice before Trump allies in Georgia began agitating for a full hand recount, and would have still been the race chosen had Trump been leading Biden, instead of the other way around.

However, it's also worth noting that in a press call yesterday, Rep. Doug Collins - the president's lead man on the recount effort in Georgia - characterized the decision to do a hand recount of the presidential race as something that came by agreement with the Secretary of State.

2:35 p.m. | It seems like this has mostly been tossed around on Twitter as a joke, but if you were seriously thinking of "living" in Georgia for a couple months in order to vote, it's a very bad idea.

"DON'T GAME OUR SYSTEM." -@GabrielSterling with the @GaSecofState's office issues a stern warning for any non-residents considering trying to vote in #Georgia's senate runoffs.

2:30 p.m. | Sterling notes the mathematical and practical implications of trying to draw a representative sample for an audit out of 5 million votes with a 14,000 margin - something an MIT professor confirmed with us yesterday.

Says if Sec. Raffensperger does have to quarantine it won't have a significant impact on recount.

2:15 p.m. | Sterling says Secretary of State's Office will not provide updated counts for the candidates as the recount goes on, but will provide updates on how much progress they're making through the count. The result will be announced in one full swoop at the end of the recount.

2:10 p.m. | Gabriel Sterling in Secretary of State's Office says recount will begin tomorrow at 9 a.m. and end next Wednesday at midnight.

He said the first training call with counties was held this morning at 11 a.m., and that it went well. He said it lasted an hour and a half.

"The counties have very good understanding of this," Sterling said.

1:58 p.m. | We're expecting a press conference from the Secretary of State's Office in about two minutes.

1:57 p.m. | The Associated Press reports Secretary of State Brad Raffensperger's wife has tested positive for the coronavirus, forcing the secretary into quarantine.

1:10 p.m. | After Sen. Marco Rubio was here yesterday to support Sens. Kelly Loeffler and David Perdue at a rally, Florida's other senator, Sen. Rick Scott, says he'll be coming to Georgia tomorrow for another rally with Loeffler and Perdue.

11:55 a.m. | We've gotten this specific question a lot from viewers, and 11Alive's Michael King has now prepared a handy one-stop answer: If I applied for an absentee ballot before, do I have to apply again for the runoff election?

11:20 a.m. | If you're interested in help digging through some of the misinformation swirling around the election, the Carter Center will be hosting this forum on its Facebook page today at 1 p.m.:

Election rumors are flying. Want to know some FACTS about votes, audits, and recounts?

Tune in TODAY at 1 p.m. ET to our Facebook page. #CarterCenterUSElection pic.twitter.com/XcEXme2n5z

On Twitter yesterday Loeffler said "Big Tech has revealed its true colors" and that the bans "are suppressing free speech" and "silencing conservatives."

And in a statement to The Hill, Warnock's campaign said it was an "irresponsible decision to ban political ads during the critical weeks of this runoff election and it cannot stand."

The critical web portals are set to continue their ban on political ads that was instituted ahead of the presidential election, according to NBC News.

9:30 a.m. | Meanwhile, we've added four more counties this morning, bringing us to 105 that have certified their results.

9:15 a.m. | The governor is touting Georgia being named the #1 state to do business for the eighth year in a row.

9:00 a.m. | Fulton County has announced they will hold their Board of Elections meeting to certify results tomorrow at 10:00 a.m.

8:15 a.m. | We're expecting comments from Gov. Brian Kemp this morning, when he and his wife, the first lady Marty Kemp, make what's being billed as a "special economic announcement" at Bridgestone Golf in Covington. It's not clear if the governor will take questions or address the ongoing election process.

11Alive will stream the governor's remarks in the video player at the top of this story at 8:30 a.m.

7:45 a.m. | Sec. of State Brad Raffensperger was on the TODAY Show this morning, and told NBC's Blayne Alexander it was "unlikely" a recount would overturn Joe Biden's current lead over President Trump in Georgia.

Good morning from Georgia - which will soon have a hand recount of *all* 5 million ballots cast in the presidential race.@GaSecofState tells me it’s very unlikely the results will be enough to change Biden’s lead in GA.

More of our interview coming up on @TODAYshow #GApol pic.twitter.com/M7i2HZjNTR

7:30 a.m. | The secretary of state's website hasn't updated in 16 hours, so we're still looking at 101 counties that have certified their results. The trickle of votes coming from counties finalizing their votes seemed to really dry up yesterday, though, so maybe we'll see a big update that brings us pretty close to the finish line some time this morning.