“I would never want to be seen as, you know, I only got into certain colleges because of the color of my skin,” said Diego Estrada. 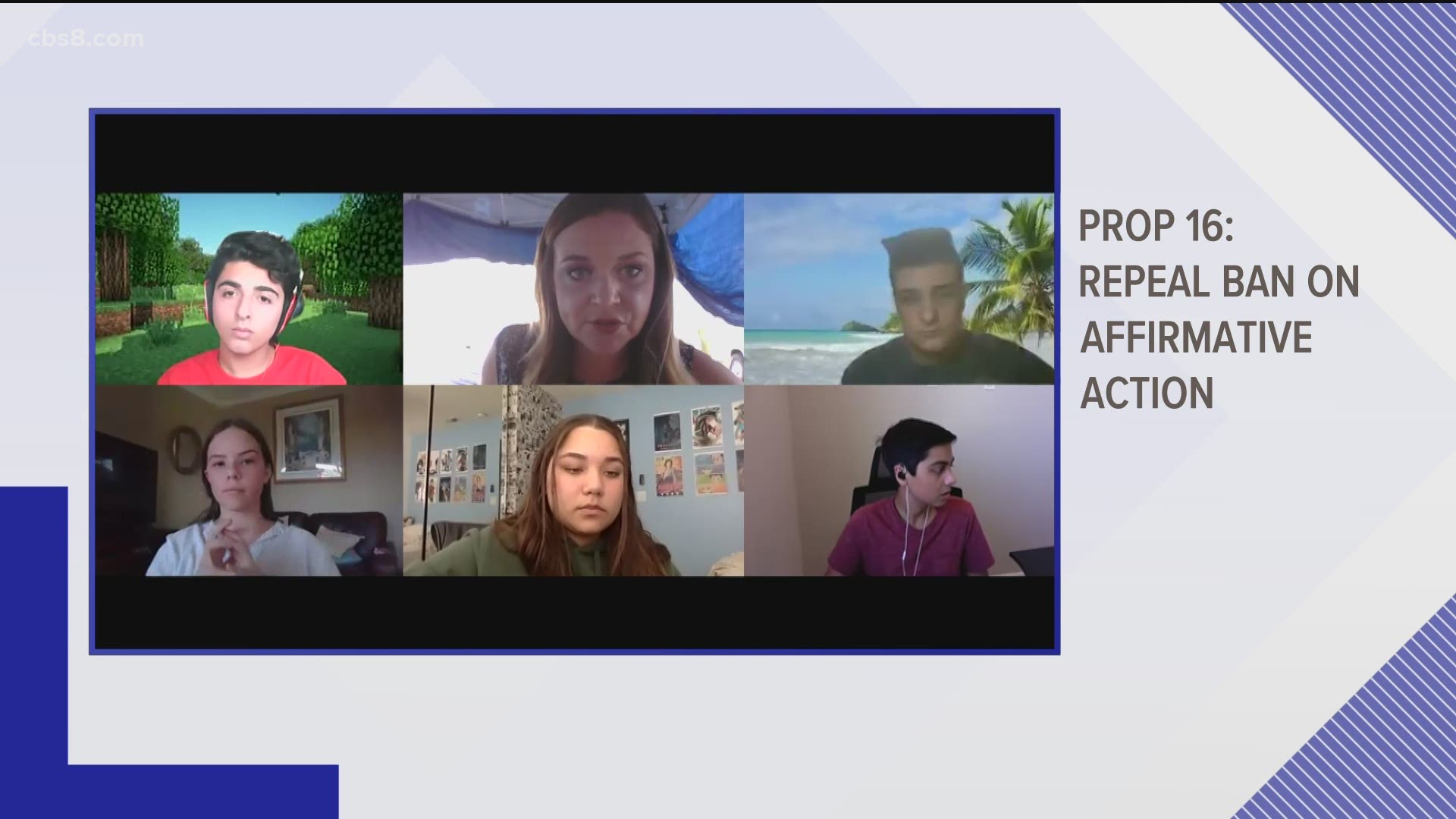 SAN DIEGO COUNTY, Calif. — There are 12 state propositions on the ballot in California that cover topics from property taxes to affirmative action. News 8’s First-Time Voters are weighing on a few issues of concern and their opinions on how they will vote.

Prop 16 explained: Depending on who you ask, Proposition 16 is either about promoting affirmative action or undoing a legal guarantee of equal rights. Voting will come down to what you believe is the best way to address racial inequality.

In 1996 California voters passed Prop 209. Modeled on language in the civil rights act, it put these words into our state constitution:

“The state shall not discriminate against, or grant preferential treatment to, any individual or group on the basis of race, sex, color, ethnicity, or national origin...”

Proposition 16 would reverse course and allow affirmative action to return to California.

Supporters of Proposition 16 argue the state needs to award more opportunities to minorities and women as a way to correct for centuries of economic and political privilege falling primarily on white men.

Opponents argue the ends don’t justify the mean and that if equality is the end goal then the most important thing is to keep equal treatment written into the law.

“My personal values say 'no' on this proposition. I like to keep the ban on affirmative action because that's what's fair,” said Bar, Miami University.

Supporters say Prop 16 will help Black and Brown students but Diego Estrada, a Hispanic student who graduated from Morse High School and a freshman at Cornell University doesn’t support the proposition that will allow public universities and state agencies to consider race and in their admissions and hiring decisions. He’s leans conservative but has remained in the middle on some issue and candidates.

“I would never want to be seen as, you know, I only got into certain colleges because of the color of my skin,” said Estrada.

“I think Diego brought it up. And that it also instills some element of doubt in cases where there are people that are saying, 'well did I deserve this or did I not deserve this? Am I supposed to be here?'” said Pujar, Minerva freshman and Biden supporter.

Proposition 18 would make a very specific change to the voting rights for 17-year-old citizens that only affects primary elections. If passed, it will allow voting for 17-year-olds in a primary or special election as long as they will turn 18 years old by the proceeding general election.

The way it works in California now is that you must be 18 years old to vote in any election. The state legislature is asking you to pass Proposition 18 to change that.

Supporters argue these younger voters deserve a chance to decide who’ll be on that November ballot.

Opponents argue we have to draw a line somewhere and 18 is plenty young enough.

Bonita Vista High School graduate, Charlsie Santana, who leans moderate, turned 18 twenty days after the March 3 primary, and wishes she could have voted and doesn’t understand why the GOP is against Prop 18.

“I don't see any arguments against it, then '17-year-olds may be misinformed and they're easily persuadable'? But I feel like it's just a common thing with the two-party system,” said Sanata, CSU Chico freshman.

Proposition 22 explained: Proposition 22 is on the ballot to decide if part-time workers should be treated as independent contractors or employees.

The state of California has been fighting with companies like Uber and Lyft for a long time now about how to treat the drivers.

California’s state government wants to make the drivers “employees” which would make them eligible for benefits and for minimum wage. The industry wants the drivers to be “independent contractors.”

Supporters argue that Prop 22 protects app-based drivers' choice to be an independent contractor and that drivers support independence by a 4:1 margin.

Opponents believe that it stops app-based companies from writing their own exemption to California law and profiting from it, denying drivers rights and safety protections they deserve: sick leave, healthcare and unemployment.

“If most rideshare drivers are kind of frustrated with what was passed because they can't be flexible or whatever, then, sure,” said Madeline Austin, MiraCosta College sophomore.

This is the first meet up in nearly a year where News 8’s First-Time Voters, who are a racially diverse group of students across San Diego County with different political views, shared similar opinions.