Harris, 55, is the first Black woman and first South Asian woman to run on the ticket of a major political party. 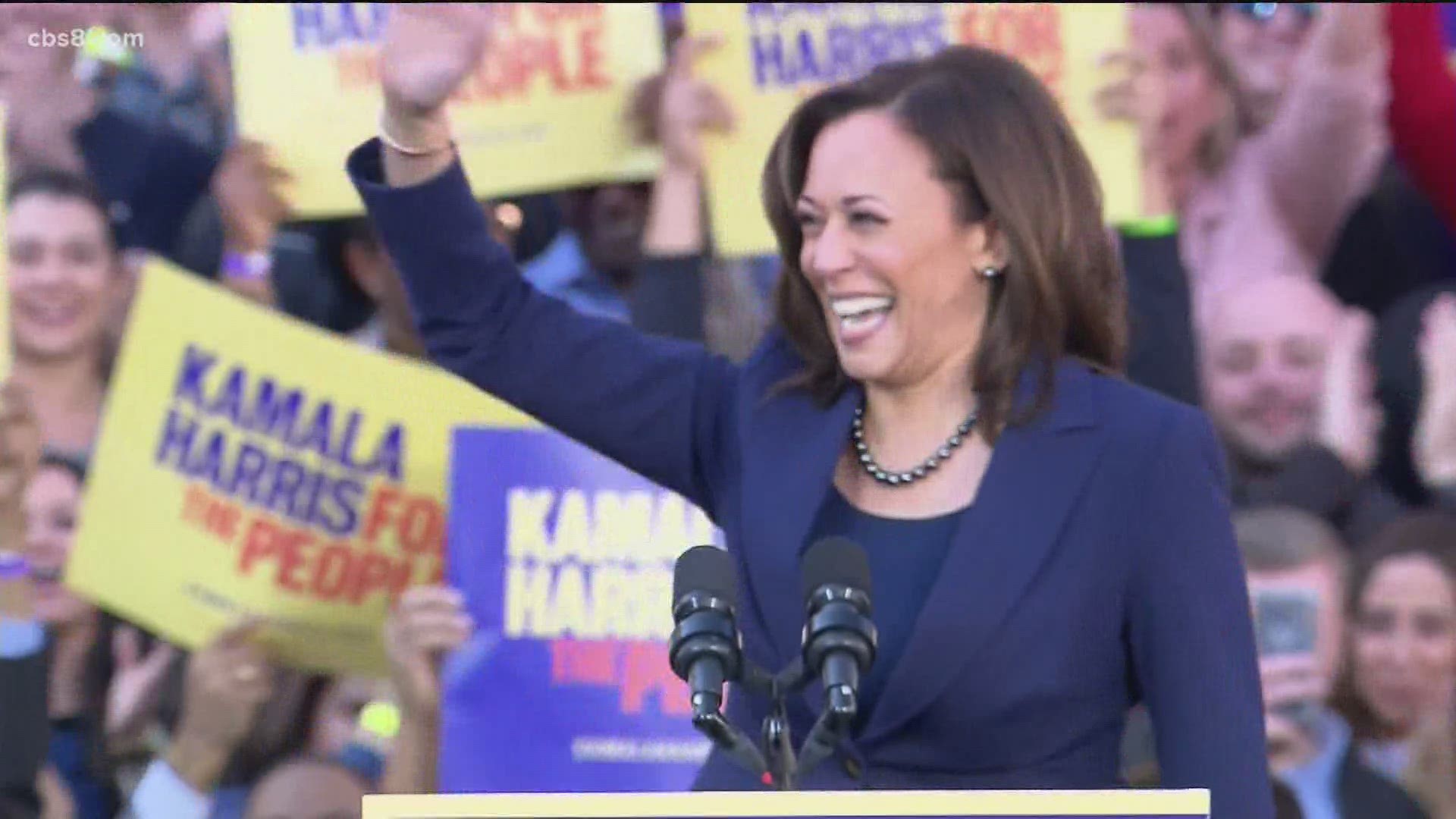 Harris, 55, is the first Black woman and first South Asian woman to run on the ticket of a major political party.

Congratulations @KamalaHarris on being selected by @JoeBiden to be our next Vice President! She’s been a true friend to me and to San Diego for many years. She’s the right pick to help Joe restore the soul of our nation. pic.twitter.com/lnBecdrgLH

"From a history-making perspective, this is so exciting," said Gloria, who has been friends with Kamala Harris for years.

"She is someone who is incredibly smart, very articulate and someone who has a passion for public service which she has shown throughout her career," Gloria told News 8.

Gloria added that Harris has come to San Diego often.

"And when she does, she checks in: and it is really authentic care...  for our city, for Southern California," he said.

"For me, it is a proud time," said San Diego City Councilmember Monica Montgomery. "Do I agree with every single thing? Nope, I don't. But at this point, I know that we have two people that are compassionate and that care about people, and right now, that is the bar."

"Congratulations to our Senator -- and, to echo the words of our Governor: Let's go win this!" wrote the San Diego Democrats for Equality. 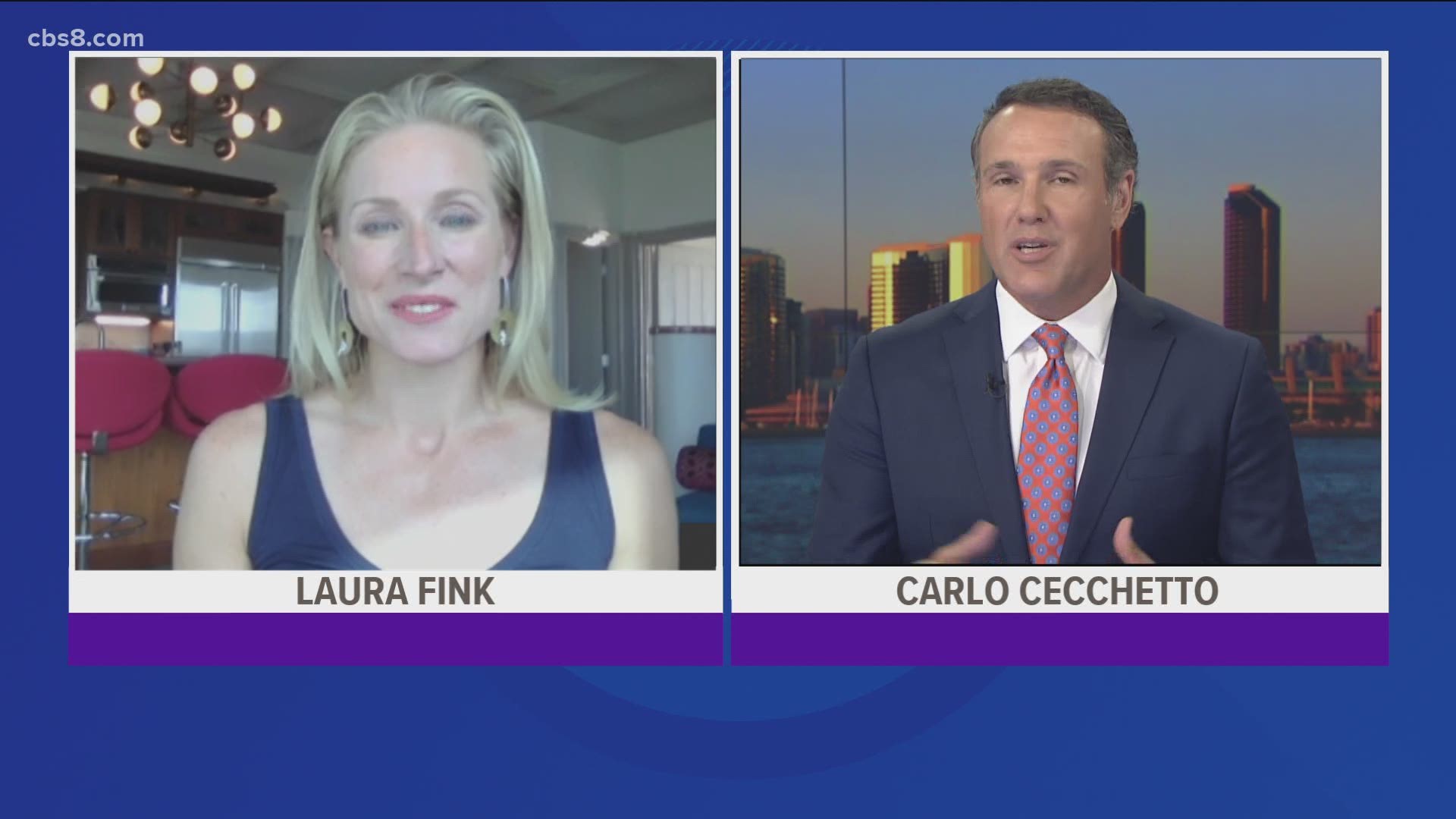 San Diego Sen. Toni Atkins, president pro tem of the California Senate, tweeted: ".@JoeBiden has created a historic presidential ticket that will lead to a White House we've been waiting for -- just, purposeful, compassionate. I couldn't be more ecstatic to congratulate my Senator, my friend, and our next Vice President, @KamalaHarris!"

.@JoeBiden has created a historic presidential ticket that will lead to a White House we've been waiting for — just, purposeful, compassionate. I couldn't be more ecstatic to congratulate my Senator, my friend, and our next Vice President, @KamalaHarris! https://t.co/qr4PgSiuVj

"Coming from a state of great diversity and as a woman mindful of the significance of this moment and this powerful and pragmatic choice of Senator Harris, I look forward to soundly defeating the cruel Trump Administration and bringing us to a more perfect union," she said.

Congratulations @KamalaHarris on being nominated as the running mate to Biden. Now let’s beat Trump. The Weber Team is all in. Onward to victory in November. pic.twitter.com/oT6AUnCqR1

Biden had promised during a primary debate in March that he would pick a woman as his running mate, and he made good on that vow Tuesday after much speculation, with a shortlist that also reportedly included Los Angeles Rep. Karen Bass, former National Security Adviser Susan Rice, Mass. Sen. Elizabeth Warren, Illinois Sen. Tammy Duckworth and Michigan Gov. Gretchen Whitmer.

"I have the great honor to announce that I've picked (Harris) -- a fearless fighter for the little guy, and one of the country's finest public servants -- as my running mate," Biden announced Tuesday via his Twitter page.

After the selection was announced, Harris wrote on Twitter: "Joe Biden can unify the American people because he's spent his life fighting for us. And as president, he'll build an America that lives up to our ideals. I'm honored to join him as our party's nominee for vice president, and do what it takes to make him our commander-in-chief."

"We congratulate Joe Biden on picking Kamala Harris as his running mate as she brings zero substance and lots of baggage -- the main being the disastrous policies of California which will go over like a lead balloon in key battleground states," he said.

"Kamala Harris ran for president by rushing to the radical left, embracing Bernie's plan for socialized medicine, calling for trillions in new taxes, attacking Joe Biden for racist policies. Voters rejected Harris: They smartly spotted a phony. But not Joe Biden. He's not that smart," the ad said.

Speaking at a subsequent White House news conference, Trump told reporters he was "a little surprised" at the choice, saying she "did very, very poorly in the primaries."

Trump referred to Harris as "nasty," referring to comments she made during confirmation hearings for Supreme Court Justice Brett Kavanaugh.

The Trump campaign issued a statement saying Harris is willing to "abandon her own morals, as well as try to bury her record as a prosecutor, in order to appease the anti-police extremists controlling the Democrat Party."