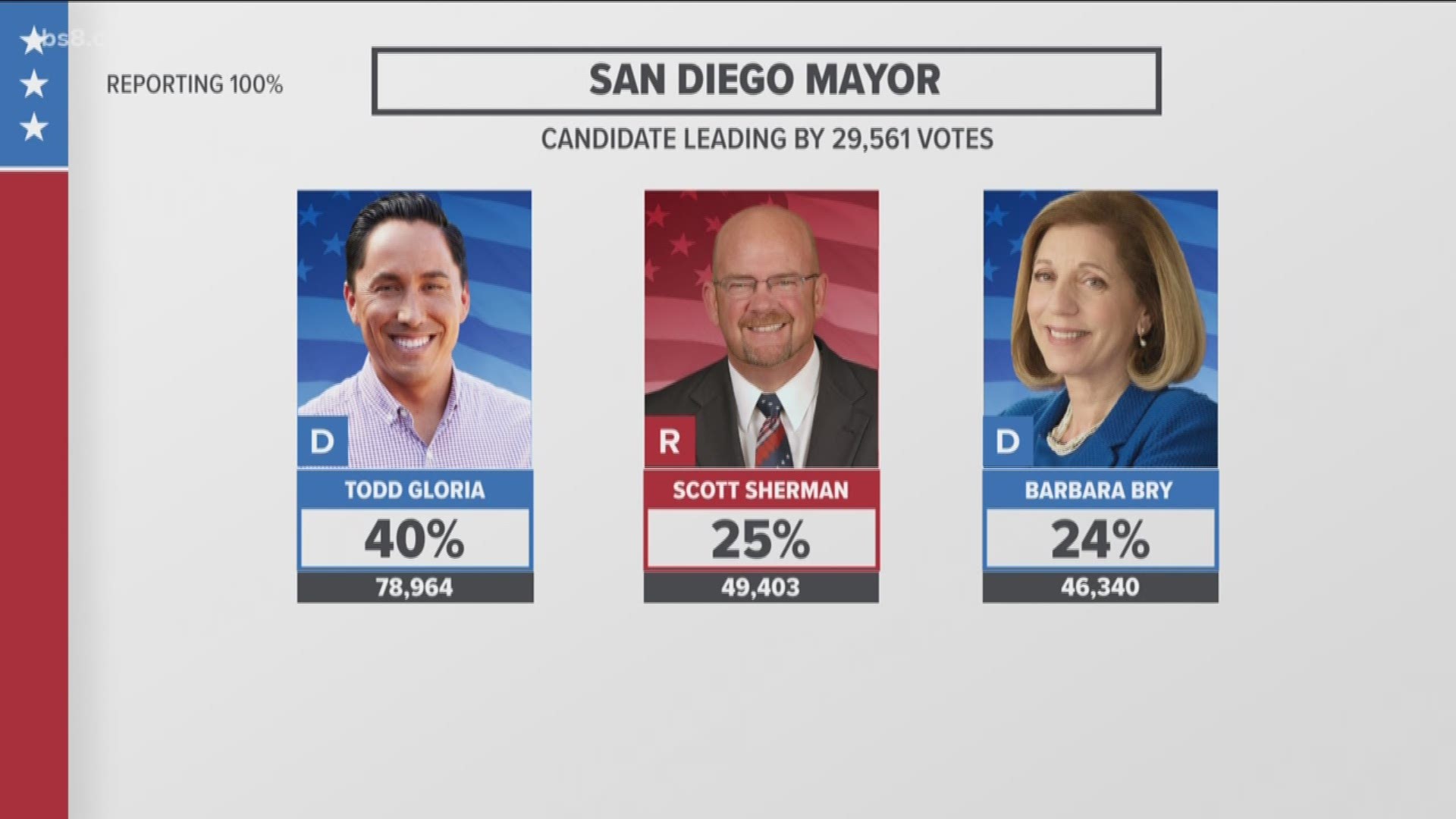 SAN DIEGO — With Mayor Kevin Faulconer on his way out due to term limits, the race is now down to two facing off for the position in November.

Assemblyman Todd Gloria topped the field of candidates in the race to replace Kevin Faulconer as San Diego mayor. According to current numbers, Gloria will likely face off with City Councilman Scott Sherman in a November runoff.

However, Sherman's fellow council member, Barbara Bry, is still hoping to officially secure second place in the primary and move on to the runoff in November.

"Whether we pull a victory out or not, there’s no doubt that we broke through," said Bry. "Whatever the outcome, I will continue to work for accountability and transparency at City Hall."

The three other candidates in the race, Tasha Williamson, Gita Appelbaum Singh and Rich Riel, were handily defeated.

Gloria, 41, has lived in San Diego all his life. He has represented the 78th District in the Assembly since 2016, previously serving two terms on the city council, including as council president and interim mayor following Bob Filner's resignation. Gloria identifies some of his biggest issues as homelessness, housing and climate change. He introduced the city's Climate Action Plan as interim mayor.

Gloria says that as mayor he will set a housing production goal for the city along with "aggressive" investment in transit. He has pledged to focus on permanent housing for those experiencing homelessness.

Sherman, 56, is also a lifelong San Diego resident. He has represented Council District 7 since 2012 and previously owned a small insurance business. Homelessness is also one of Sherman's biggest issues, and he says the city needs to "provide services to those with mental health issues and treatment for those with substance abuse issues," but also said enabling people to live on the street endangers those people and the community.

Sherman said the housing crisis will not be solved with government-subsidized housing; instead, the city needs to cut regulations and red tape to allow developers to build. For public safety, he said it is time for San Diego to "end the social experiments and political pet projects" and put more police on the streets.

Bry, 70, has lived in San Diego for 39 years. She has represented Council District 1 since 2016 and has been council president pro tempore and chair of the Budget and Government Efficiency Committee. Her campaign website highlights a wide range of issues, but paring down short-term rentals to allow for more housing is one of her most prominent issues.

Focusing on mental health and putting trained professionals on the street are how she plans to tackle homelessness. Her plan for more government transparency on projects like 101 Ash St. is another cornerstone of her campaign.