Some historically Republican Texas seats could be up for grabs, including one left open by a U.S. Rep. Kenny Marchant, who announced his retirement last year. 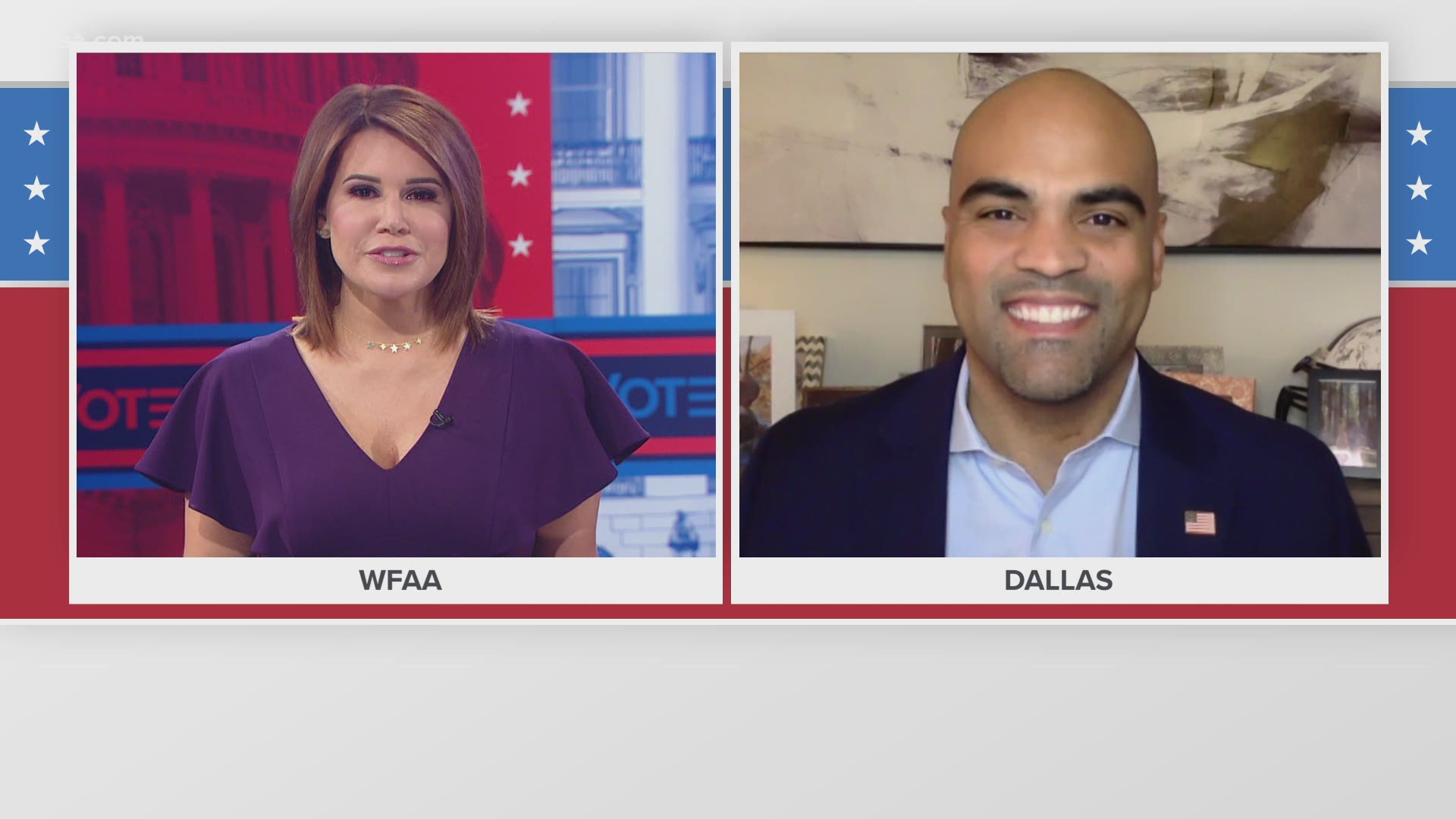 Allred flipped the seat blue two years ago. He is one of the Democrats defending the majority in the 435-member U.S. House of Representatives.

Formerly a Republican district, Democrat Colin Allred ousted Pete Sessions with 52% of the vote in 2018.

The district includes the Park Cities, eastern Dallas and parts of Garland, Mesquite and Richardson. Though most of the district falls in Dallas County, it does span into Collin County to include most of Wylie and all of Sachse.

In another heated race, a Democrat is seeking to flip a historically Republican seat left open by a U.S. Rep. Kenny Marchant, who announced his retirement last year.

Marchant represents the 24th Congressional district, which includes Carrollton, Coppell, Irving, Southlake and the DFW Airport. He was elected to Congress in 2004.

He narrowly kept his seat during the 2018 election.

Now there is a battle between a Trump Republican and a Democrat who hopes to flip the seat and become first Black Latina in Congress.

RELATED: U.S. Rep. Kenny Marchant will not run for re-election, is the fourth recent GOP retirement in Texas

And in Collin County, Democrats were pointing to high voter turnout as a chance to turn Rep. Van Taylor's seat blue. But the Republican had a strong lead by Tuesday night.

Republican Beth Van Duyne is the former mayor of Irving. She endorsed Trump during the 2016 election and was appointed as a regional administrator for the U.S. Housing and Urban Development. Van Duyne says she wants to combat a rise in socialism and curb illegal immigration.

RELATED: Irving mayor: Full story not out in clock incident

Democrat Candace Valenzuela is a former trustee on the Carrollton-Farmers Branch Independent School District board. She hopes to flip the Republican seat to become the first Black Latina in Congress. Valenzuela says she would expand the Affordable Care Act, implement a public health care option and lower the cost of prescription drugs.

Republican Van Taylor won re-election for a second term in the U.S. House to represent a district that includes Allen, McKinney, Frisco, Plano and Richardson in Collin CountyTaylor has previous served in the Texas Senate and Texas House, according to the Associated Press late Tuesday.

Taylor is a U.S. Marine who served in the Iraq War. Taylor attended Harvard University, where he earned his MBA. He calls himself a "bipartisan problem solver." He was one of three authors of the HOPE Act, which aimed to provide financial assistance to the commercial real estate market during the coronavirus pandemic.

Democrat Lulu Seikaly is a first-generation American whose parents fled war-torn Lebanon. She graduated from Southern Methodist University after attending Ursuline Academy. Seikaly works as an employment attorney. Though Republicans have held this seat since 1968, Texas Democrats believed that changing demographics could help Seikaly win. Her website says she wants to "ensure that every American has the opportunity to succeed just like her family did here."

In 2018, Taylor won the seat with 54.2% of the votes. Libertarian Christopher Claytor, who is running again, received 1.5% of the votes.

Republican Genevieve Collins hoped to flip the district back to red. The political newcomer ran for public office for the first time. Collins works at her family's company, iStation. She says she wants to maintain the 2017 tax cuts and audit the federal government's spending. Her campaign has drawn attention and fundraising from the National Republican Congressional Committee, which hopes to take back Allred's seat. In third-quarter fundraising, Collins raised $1.23 million, shy of Allred's $1.26 million, reported The Texas Tribune.

Democrat Colin Allred won re-election for a second term. He ended the third-quarter fundraising period with $1.7 million in the bank, compared to Collins' $1 million, according to The Texas Tribune. He is an attorney and a former NFL player for the Tennessee Titans. Allred has worked across the aisle and worked to convert an old Garland medical center into a Veterans Affairs hospital to reduce wait times at the Dallas VA. He attended Dallas schools, where his mother was a teacher.