From the podium to the crowd, Georgians were on hand as Joe Biden and Kamala Harris were sworn in as president and vice president. 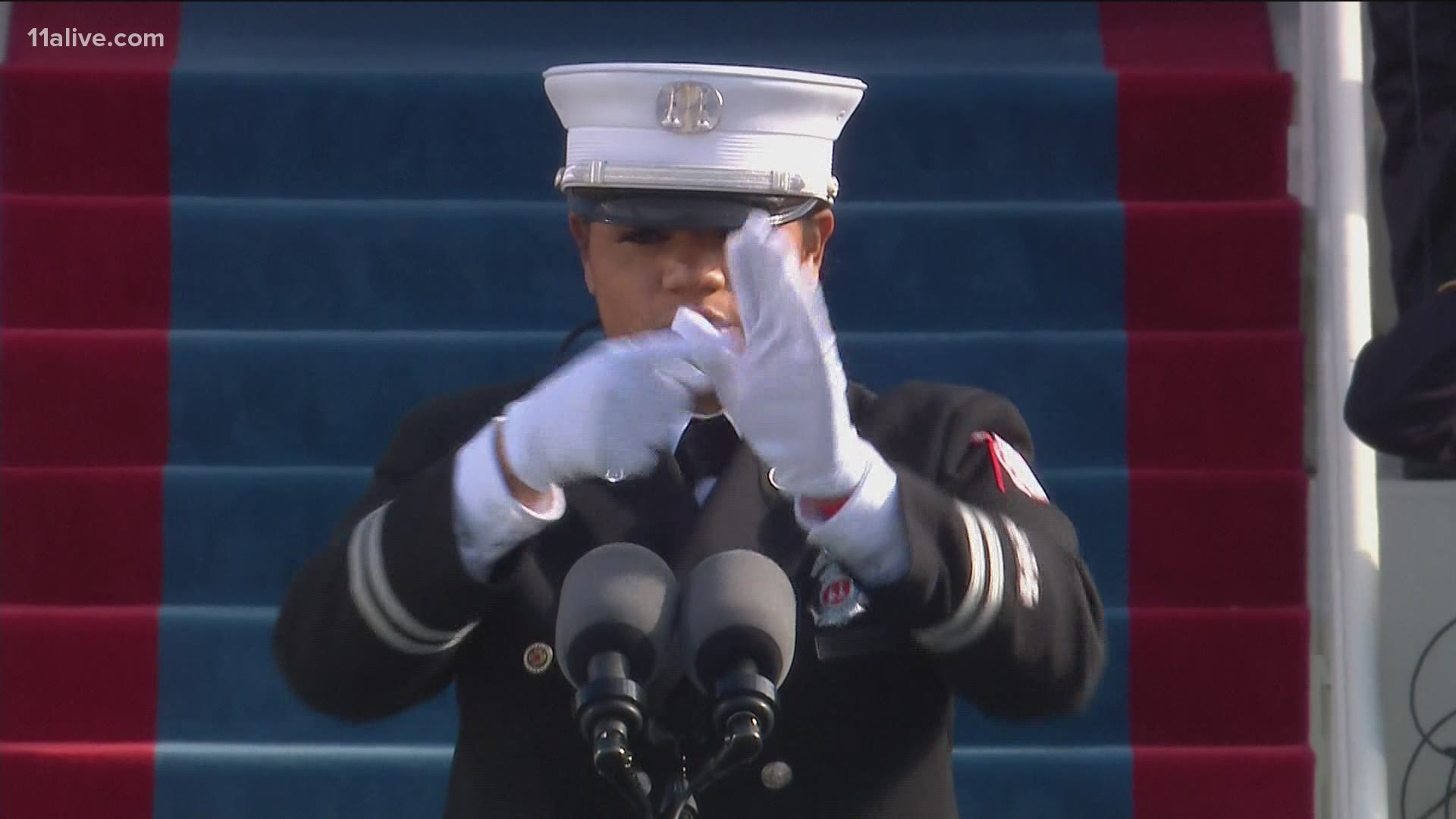 ATLANTA — As President Joe Biden and Vice President Kamala Harris were sworn into office on Wednesday, a number of Georgians were involved and on hand for the history-making ceremony.

Most prominently featured was the role of City of South Fulton Fire Captain Andrea Hall. She stepped to the front of the inaugural podium and conducted the Pledge of Allegiance, both verbally and in sign language.

There were also a number of influential Georgians in attendance to see Hall's inspiring rendition of the Pledge.

Atlanta Mayor Keisha Lance Bottoms tweeted a photo of her and her husband in front of the U.S. Capitol and wrote: "#Inauguration2021 ....and the people of God said AMEN!"

The 7th District representative later wrote: "Congratulations, President @JoeBiden and Vice President @KamalaHarris. This historic day is an affirmation of the strength of our democracy. Today, we begin to set aside the politics of stalemate and division. And now the real work begins!"

Rep. Williams also wrote a message on Twitter before the inauguration began: "In a few minutes, Joe Biden and Kamala Harris will be sworn in as the President and Vice President of the United States. I am ready to help deliver their promises to the American people. Together we will write the next chapter in our nation’s history."

She posted a photo in front of the Capitol, as well:

Rep. Rick Allen (R - 12th Dist.) attended the inauguration and lauded the peaceful transfer of power from one administration to another.

"Today we witnessed a great American tradition: the peaceful transfer of power," Allen said in a statement. "While I will continue to fight for our conservative values, I am hopeful we can find areas for bipartisanship over the next four years. Their success is now our nation’s success.”

Rep. David Scott, now the second-longest serving member of the Georgia congressional delegation, was there too.

Excited to witness the historic inauguration of President-Elect Biden and Vice President-Elect Harris here in Washington today. Together we’ll work to build a better future for the American people. pic.twitter.com/yFeSVD9oD1

And, of course, Senators-elect Rev. Raphael Warnock and Jon Ossoff were on hand, as they will later be sworn in by Vice President Harris this afternoon.

Ossoff posted a photo with his wife Alisha Kramer, who is an OB/GYN at Emory.

U.S. Rep. Hank Johnson (D-4th Dist.) referred to the day in a tweet as "Springtime in America," which appeared to paraphrase an optimistic 1984 political speech and ad campaign from President Ronald Reagan, that opened, "It's morning again, in America."

.@JoeBiden President Biden sworn in! A day of history where democracy lives on in America! It's springtime in America!

U.S. Rep. Buddy Carter (R-1st Dist.), representing parts of the coastal area of Georgia, was joined by Dr. Karla Sapp as his guest at the inauguration. Sapp is a drug abuse program coordinator for the Bureau of Prisons.

Glad to have Dr. Karla Sapp from Midway join me today at the inauguration. Dr. Sapp does important work in the First District as a drug abuse program coordinator at the Bureau of Prisons. pic.twitter.com/T66VttUjf4

Two Georgia lawmakers in the House -- Barry Laudermilk (R - 11th Dist.) and Jody Hice (R - 10th Dist.) -- extended their hopes that President Biden would work together to help all Americans regardless of their political party.

[3/3] I congratulate Joe Biden, the 46th President, and encourage him and his Administration to work with me and my colleagues in Congress to ensure the rights of all Americans are equally protected.

Despite all that divides us, we are still the UNITED States of America.

I pray to God that @POTUS Joe Biden will keep his word to protect the rights of ALL Americans, no matter their political ideologies.

May God bless America and all who love and serve her!