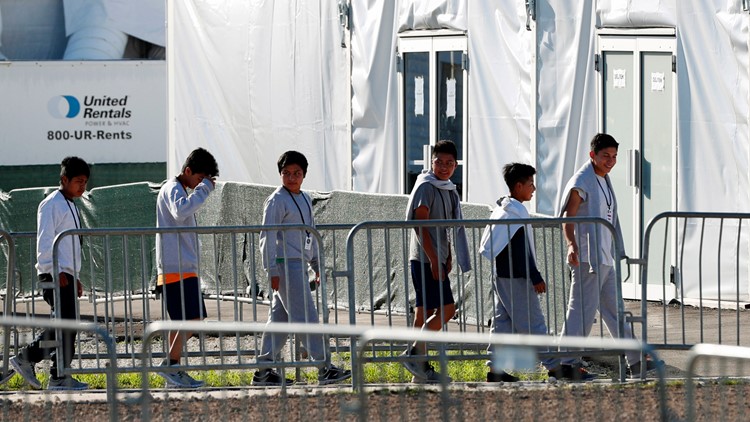 Photo by: AP
In this Feb.19, 2019 file photo, children line up to enter a tent at the Homestead Temporary Shelter for Unaccompanied Children in Homestead, Fla. (AP Photo/Wilfredo Lee, File)

"It's an extraordinarily challenging situation," McAleenan told ABC's "This Week."

The Homeland Security Department's internal watchdog provided new details Tuesday about the overcrowding in Texas' Rio Grande Valley, the busiest corridor for illegal crossings. The report said children at three facilities had no access to showers and that some children under age 7 had been held in jammed centers for more than two weeks. Some cells were so cramped that adults were forced to stand for days on end.

RELATED: VERIFY: Are migrants forced to drink toilet water in US detention facilities?

Government inspectors described an increasingly dangerous situation, both for migrants and agents — a "ticking time bomb," in the words of one facility manager. The report echoed findings in May by the department's inspector general about holding centers in El Paso, Texas: 900 people crammed into a cell with a maximum capacity of 125; detainees standing on toilets to have room to breathe; others wearing soiled clothing for days or weeks.

In tweets Sunday afternoon, Trump went further than McAleenan in defending his administration's response, accusing the news media of "phony and exaggerated accounts" but without providing evidence.

"Border Patrol, and others in Law Enforcement, have been doing a great job. We said there was a Crisis - the Fake News & the Dems said it was 'manufactured,'" Trump wrote. Federal detention centers "are crowded (which we ... brought up, not them) because the Dems won't change the Loopholes and Asylum. Big Media Con Job!"

Democrats faulted Trump for not offering an immigration overhaul that could pass a divided Congress.

"The president is acting like we are some weak, pathetic country," said Colorado Sen. Michael Bennet, a Democratic presidential candidate. "We have the ability to treat human beings humanely. We have the ability to lead our hemisphere in a discussion about how to deal with this refugee crisis," he said on "Fox News Sunday."

McAleenan said that since the first of the year, 200 medical providers have been added to facilities, including personnel from the U.S. Coast Guard and the Public Health Service Commission Corps.

"We have pediatricians in border patrol stations for the first time in history trying to help address conditions where children are coming across 300 a day in ... April and May," McAleenan said.

"We've built soft-sided temporary facilities. These are spaces that are much more appropriate — high ceilings, more room for children and families. We've put them both in Donna, Texas, in South Texas as well as in El Paso to provide additional space. ... We've bought buses to transport people to better places."

RELATED: Beyond the Border: Some migrants seeking asylum surrender their dream and return to their home country

McAleenan disputed news reports, including those by The Associated Press, of especially troubling conditions at a border station in Clint, Texas, where a stench was coming from children's clothing and some detainees were suffering from scabies and chickenpox.

"Inadequate food, inadequate water and unclean cells. None of those have been substantiated."

He said everyone in the chain of command is worried about the situation of children detained at the border. He said that on June 1, his department had 2,500 children in custody, including 1,200 who had been there for more than three days. As of Saturday, McAleenan said there were 350 children, and only 20 have been in the department's custody for more than three days.

"So that's huge improvement based on the resources we asked for from Congress and were finally given," he said.

Sen. Jeff Merkley, D-Ore., told NBC's "Meet the Press" that he is stunned when administration officials say that reports on the conditions are unsubstantiated.

"I'm just like, 'What world are they living in?'" Merkley said, citing government and news reports. "From every direction you see that the children are being treated in a horrific manner. And there's an underlying philosophy that it's OK to treat refugees in this fashion. And that's really the rot at the core of the administration's policy."

Separately, McAleenan addressed questions about U.S. Border Patrol agents who are under fire for posting offensive messages in a "secret" Facebook group that included sexually explicit posts about U.S. Rep. Alexandria Ocasio-Cortez and dismissive references to the deaths of migrants in U.S. custody. The existence of that group was reported Monday by ProPublica. Prior to that, few people outside the group had ever heard of it.

He said an allegation about such activity was investigated in 2016. "Discipline was meted out on an agent that made an offensive post on that website," he said.