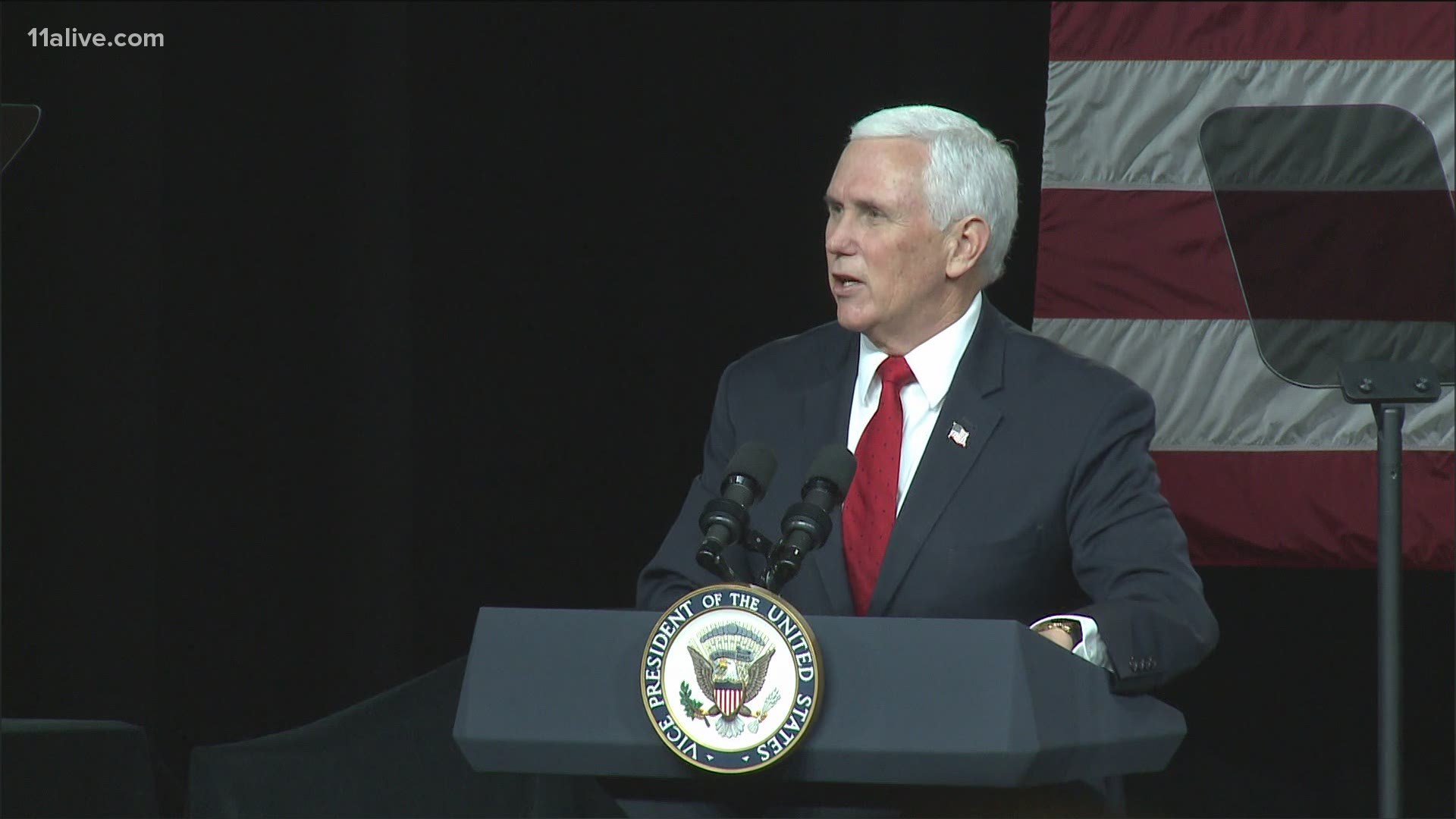 The vice president’s visit to a church here may have been overshadowed by President Trump's visit to Dalton a few hours later – but Pence has his own strong following among evangelical voters.

"The best vice president I’ve ever known," said Teresa Milner of Albany. "And I hope there’s some way they can keep it and stay in" power.

Pence filled hundreds of seats at Rock Springs Church. Many in the audience were openly skeptical about the results of the November election and the integrity of Tuesday’s runoff -- fueled by well-publicized presidential fantasies of widespread voter fraud in Georgia and elsewhere.

Election officials have repeatedly said that there is no evidence of widespread voter fraud.

"I don’t have much faith in the electoral process or the voting process right now," said Ruby Cannon of Monroe County.

She added she would still vote in the runoff.

"I think the election was taken from the people, that our voice wasn’t truly heard," added Cassie Barrow of Pike County.

Pence got a raucous greeting – preaching to the proverbial choir, asking conservatives to vote, and framing it in nearly apocalyptic terms.  "In one more day, we need to win Georgia and save America," Pence said.

Neither Senator Perdue nor Loeffler appeared with Pence. Loeffler was expected in Dalton with President Trump a few hours later.  Perdue spoke briefly by phone, held up to a microphone by a church pastor, from COVID 19 quarantine.

"Tomorrow is a day of accounting, a day of reckoning. It will determine the future of our country for at least fifty to a hundred years," Perdue said.

RELATED: Trump, Biden, Pence in Georgia  ahead of US Senate runoff elections

"This Senate race is just as important as the presidential election," added  Ruby Cannon, a Monroe County voter.

Nobody onstage mentioned a phone call recorded over the weekend between President Trump and Secretary of State Brad Raffensperger – in which Trump discussed his desire to "find" enough votes to win Georgia.

Spectators at the Pence event said they’re inclined to give Trump the benefit of the doubt.

"I don’t know that our state is really doing all that it can to investigate" the election, Cannon said.

Despite an absence of evidence of widespread voter fraud, Perdue defended the President on Fox News and attacked Secretary Raffensperger

"To have a statewide elected official tape unknowingly a private conversation with the president of the united states and leaking it to the press, that is disgusting," Perdue said. "75 million Americans align with" Trump's concerns, he added.

Pence said there would be a  "reckoning" later this week when Congress votes on whether to accept the votes of the electoral college.