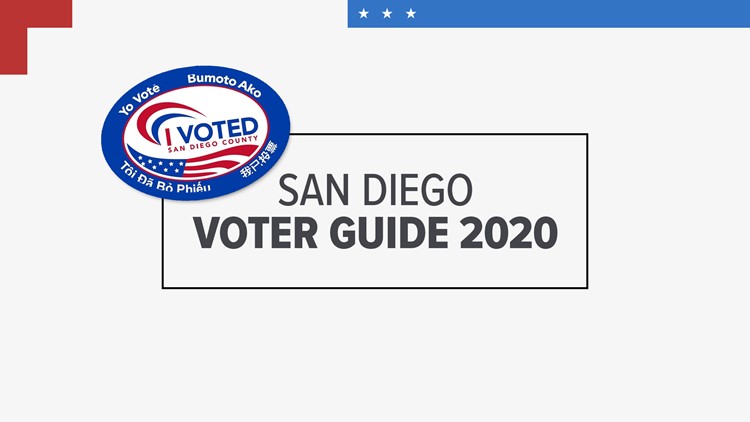 San Diego Voter Guide 2020: What to bring, where to vote and what's on the ballot

SAN DIEGO COUNTY, Calif. — California's primary is on March 3rd, and the polls are open until 8 p.m.

California moved up its primary to Super Tuesday in an effort to be more influential as the Golden State awards 416 pledged delegates.

Find results of the primary here.

California voters will be able to change their party affiliation and update their address at polling stations in the upcoming March 3 Democratic primary. Gov. Gavin Newsom signed the measure into law last month, and it took effect immediately.

The change was particularly sought by Democrats.

It will allow the state’s 5.6 million independent voters to register with a party by filling out just one form on election day. Democratic presidential campaigns hope the law will boost the number of registered Democrats and participation in their primary.

Independent voters can also explicitly request a Democratic ballot if they wish to vote in the primary but not change their voter registration.

When and where do I vote?

California's primary is March 3rd, also known as Super Tuesday. Any registered voter in California can decide whether to vote at a polling place or vote by mail.

Text News 8 on Election Day to share your voting experience

From the excitement of getting that "I Voted" sticker to voters lining local blocks, we want to keep in touch with YOU on Election Day!

How to register to vote in California after the Feb 18 deadline has passed.

If you missed the voter registration deadline, you can still register to vote and cast a provisional ballot in the March 3 Presidential Primary Election. For now, that’s only at the Registrar of Voters Office. San Diego County Registrar of Voters Michael Vu announced Tuesday, Feb. 25 that starting Feb. 29, the office will open four satellite locations so voters will have more opportunities to register and vote. The locations will be open through Election Day and will be located in San Marcos, Carmel Mountain Ranch, Spring Valley, and Chula Vista.

What is the Voter's Choice Act?

The new law passed in 2016 modernized elections in California by allowing voters to choose how, when, and where to cast their ballot by:

What do I need to vote?

California voters are not required to show identification to a polling place worker before casting a ballot.

Can I vote by mail?

How do I find out what my legislative and congressional districts are?

You may contact your county elections official or refer to "Who Are My Representatives?"

Who’s running for the City of San Diego mayor?

The two top vote-getters in the primary, regardless of party affiliation, will compete for mayor in the November presidential election to replace outgoing Mayor Kevin Faulconer.

Proposition 13 on the March ballot is creating some confusion among voters. It has the same number as Proposition 13 of 1978, but has nothing to do with the well-known constitutional amendment on property taxes.

RELATED: VERIFY: Is a repeal of Proposition 13 on the March ballot?

San Diego Countywide Measures A and B:

Measure A: Amendment to the San Diego County General Plan

Who are the 50th Congressional District candidates?

The two top vote-getters in the primary, regardless of party affiliation, will compete for the Congressional seat in the November presidential election to replace Duncan Hunter.

Measure C would increase the hotel occupancy tax to pay for expanding the Convention Center as well as fund programs to address homelessness and the San Diego roads.

RELATED: Pros and cons of Measure C’s plan to fund the expansion of the San Diego Convention Center

What San Diego County measures are on the ballot?