The San Diego Sheriff's Department on Monday night warned people to stay off two parcels of land where President Donald Trump will visit border wall prototypes during his first visit to California ... 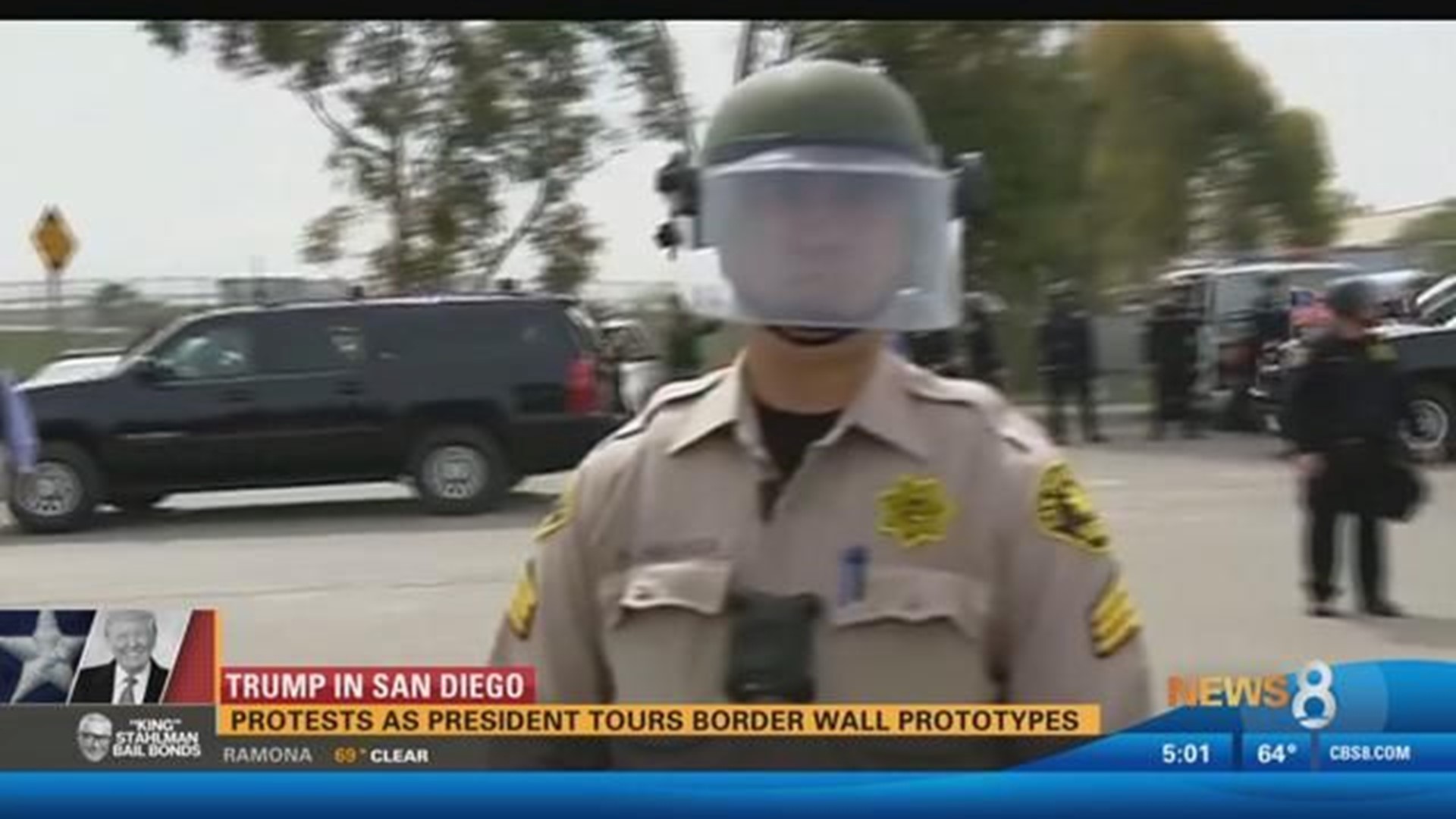 SAN DIEGO (CNS) - Making the first trip of his administration to California, President Donald Trump traveled to Otay Mesa Tuesday to view prototypes of his proposed border wall, saying after the tour he prefers a barrier that allows law enforcement to see through into Mexico.

Trump spent about an hour Tuesday viewing the eight 30-foot-high samples that were built to offer an array of options for the wall Trump has promised to erect along the U.S.-Mexico border. Some are solid concrete, while others are made from a blend of materials including metal slats - which Trump said would be the best choice to secure the country's southern border.

"You have to have see-through. You have to know what's on the other side of the wall," Trump said. "You could be two feet away from a criminal cartel and not even know they're there."

Trump said the wall should have metal slats at the bottom and concrete or a blend of steel and concrete at the top. It should also have a rounded top to deter people who would climb the wall in an attempt to enter the United States.

Among those accompanying Trump on his tour was a Border Patrol agent who told the president it "changed our environment" when the government erected the first border barriers in San Ysidro in the 1990s. He said illegal crossings dropped after those fences, some of which are made of scrap metal, were built.

"We have a lousy wall now," Trump said. "When we put up the real wall, we're going to stop 99 percent (of illegal crossings), maybe more than that."

Trump also took the opportunity to call on Congress to pass a budget that includes funding for the wall. Construction estimates for the project on the entire 1,900-mile border range from $21.6 billion to $70 billion.

The president also renewed his criticism of sanctuary jurisdictions - including those in California - saying they should be stripped of federal grant funding.

California has emerged as an epicenter of opposition to Trump's immigration policies. Attorney General Jeff Sessions last week sued the state and its leaders, including vocal Trump critic Gov. Jerry Brown, for its so- called sanctuary laws.

Sessions said the laws, which restrict how local law enforcement can cooperate with federal immigration officials, are unconstitutional and undermine national security.

Trump also referred to Oakland Mayor Libby Schaaf's recent warning to constituents of impending raids by Immigration and Customs Enforcement agents as a "disgrace to our nation."

The president said cooperation with Mexico is a "crucial" element of border security. Trump has pledged that Mexico will pay for the cost of the border wall, a suggestion that President Enrique Pena Nieto rejected last year.

"I have a great relationship with the president of Mexico, wonderful guy Enrique," Trump said. "We have to have a couple of disagreements before we get there."

But Trump seemed optimistic that a change in leadership following the Mexican election in July could lead to a more favorable set of circumstances.

Meanwhile, friends and foes of Trump rallied in the border communities of San Ysidro and Otay Mesa for hours leading up to his visit.

Chanting "build that wall" and "we love Trump," a group of at least 100 supporters of the president and his plan to build a wall along the U.S.-Mexico border gathered in Otay Mesa.

Meanwhile, anti-Trump protesters gathered near the Plaza Las Americas mall in San Ysidro with signs including "love has no borders" and "no hate in the Golden State."

The largest planned anti-Trump protest was held at San Ysidro Catholic church that offers a full view of the nearby border. The event was organized in part by the ACLU of San Diego and Imperial Counties.

"Neither the United States, California, nor our local communities need this costly and divisive wall," according to the ACLU branch. "What we need is action to ensure DACA recipients and their families are safe from deportation."

Those at the San Ysidro rally held up California immigration policies as ones that should be emulated on a national level - the same policies that have raised the ire of the Trump administration.

Despite the tense relationship between Trump and the Golden State, Californians in support of the "big, beautiful wall" came out in force to welcome the president.

"The public has been expressing a strong desire to publicly show their overwhelming support for President Trump's visit and his commitment to securing our border and homeland," said Jeff Schwilk, Founder of San Diegans for Secure Borders.

According to the White House, Trump will speak to military personnel at Miramar at 2 p.m. before heading to the Los Angeles area for a Republican National Committee fundraiser.