Tensions remained high Thursday as an investigation continued into the fatal police shooting of an unarmed, mentally unstable black man in El Cajon. 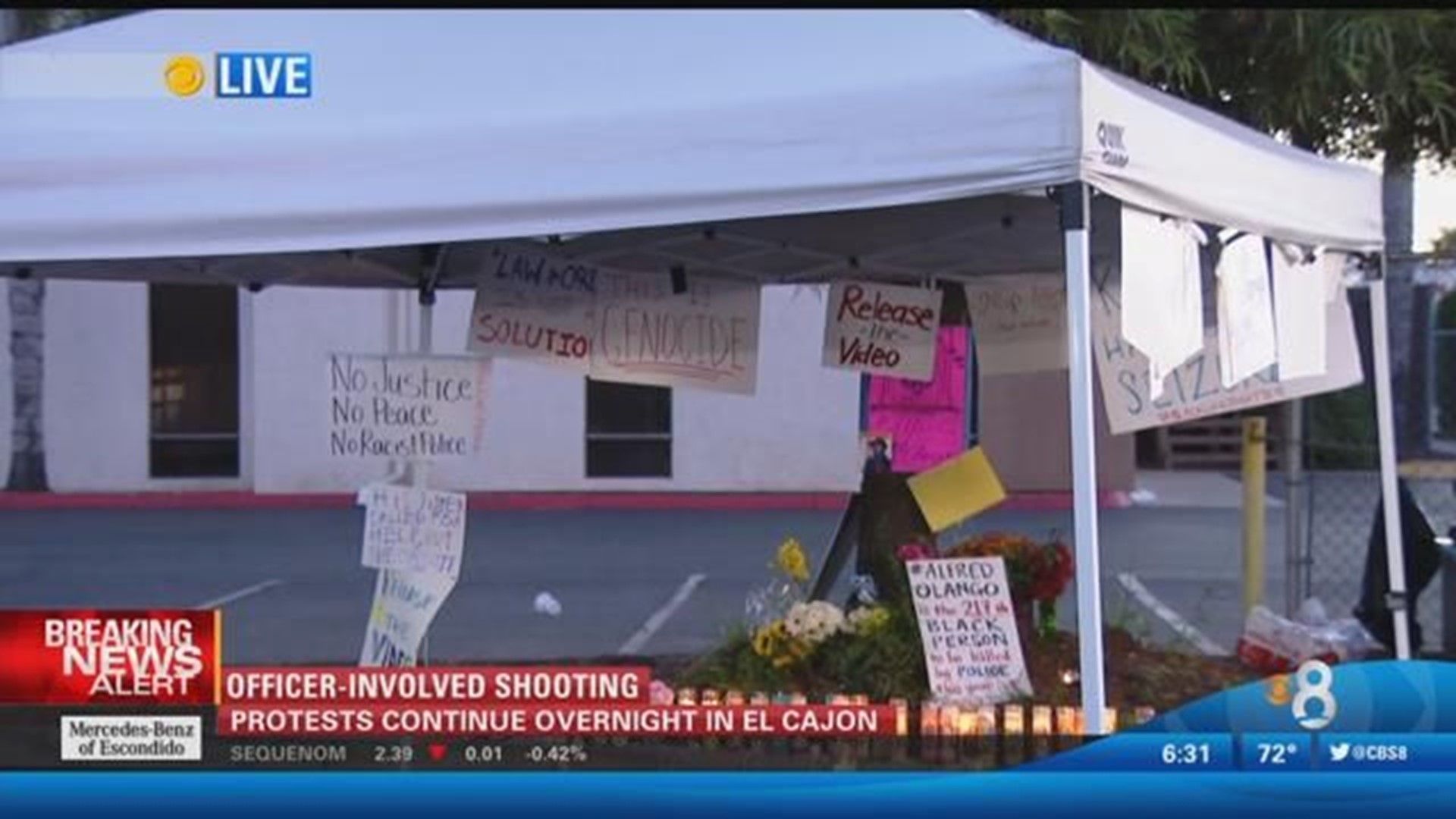 EL CAJON, Calif. (AP) - Several hundred people are marching thru the streets of downtown El Cajon, California, after a rally to honor the memory of an unarmed black man fatally shot by police.

Numerous religious leaders spoke for more than an hour at a park in the San Diego suburb Saturday. They criticized police for pulling the trigger on Alfred Olango and called for more training of officers on how to respond to people who are having psychological emergencies.

One speaker generated applause when he asked the crowd rhetorically if police would have responded differently if Olango was white.

The demonstrators were peaceful as they walked down Main Street toward police headquarters, with some carrying signs with Olongo's name and chanting, "no justice no peace."

About 200 people are gathered at a park in downtown El Cajon, California, to protest the fatal shooting of an unarmed black man by police.

Six religious leaders plan to address the crowd Saturday before marching through the streets to police headquarters. The family of Alfred Olango is expected to join the rally there.

Some Main Street businesses are closed. The crowd is peaceful and there is no sign of police presence in the San Diego suburb.

The event comes a day after two videos of the shooting were released by authorities, something Olango's family and community leaders had urged.

The videos show the officer fired four times at close range almost immediately after Olango raised both hands to chest level and took what was described as a shooting stance.

EL CAJON (CBS 8/CNS) - Protests of the fatal police shooting of a Ugandan emigre at an El Cajon strip mall turned violent Thursday night, prompting the arrests of two men and the use of pepper balls by officers to disperse the crowd of about 50 to 75.

The third night of demonstrations over the death of 38-year-old Alfred Olango, which protesters maintain was unwarranted and racially motivated, started heating up around 8 p.m. in the area of North Mollison Avenue and Broadway where police said the crowd occupied the intersection.

The protesters stopped vehicles, broke car windows and knocked a motorcyclist off his motorcycle, according to Lt. Rob Ransweiler of the El Cajon Police Department.

The ECPD received numerous 911 calls about the disturbance in the intersection and a group of officers from the multi-agency composite platoon moved into the area, he said. An unlawful assembly was declared by law enforcement at the scene and notice was given to the protesters to disperse.

The protesters began throwing glass bottles at the police and after the group refused to disperse pepper balls were deployed, Ransweiler said.

Two men from El Cajon, ages 19 and 28, were taken into custody on suspicion of participating in the unlawful assembly but their names were not released.

There were no injuries reported, Ransweiler said.

Protests began shortly after 38-year-old Uganda native Alfred Olango was mortally wounded during a confrontation with officers outside a strip mall restaurant near the intersection of Interstate 8 and state Route 67 Tuesday afternoon. Demonstrators contend that an officer was unduly quick to open fire and that the decision was at least in part racially motivated.

"These senseless killings have to stop -- not just in El Cajon but in the entire country,'' community activist Estela De Los Rios said.

One witness told reporters Olango had his hands raised when shots rang out, and another indicated he may have suffered a seizure. However, police said Olango was uncooperative, had repeatedly refused to remove his hand from his pocket, assumed "what appeared to be a shooting stance,'' and pointed an object that turned out to be an electronic smoking device at one of the officers.

On Wednesday afternoon, demonstrators headed to where the deadly encounter played out less than 24 hours earlier, a commercial district a few blocks north of El Cajon Valley High School. A rally continued into the evening and protesters at times blocked streets and faced off with rows of officers in riot gear. The disruptions prompted the temporary closure of nearby Parkway Plaza mall.

El Cajon Mayor Bill Wells said during a late afternoon briefing that he was "completely fine'' with peaceful protests is concerned about the potential for the protests to turn destructive.

"I see what's happening all over the country,'' Wells said. "Of course I'm worried. ... I don't expect anything bad to happen, but I certainly don't want to be caught unaware.''

A still image lifted from witness video that showed a crouching man holding something at face level as two officers apparently trained weapons on him was released hours after the shooting. Protesters criticized police for releasing one photo, instead of the entire video.

Wells said he had seen the full video and was deeply affected by it but was holding off on any judgments.

"I saw a man who was distraught, a man who was acting in ways that looked like he was in great pain,'' Wells said. "And I saw him get gunned down and killed, and it broke my heart.''

Each of the officers, who had more than 20 years of law enforcement experience, were placed on administrative leave, per protocol. Police have promised a thorough and transparent multi-agency investigation. Protesters called for a federal investigation.

Critics have questioned why personnel with special training to deal with the mentally ill were not dispatched after police received a report that Olango was behaving erratically and walking in traffic. A distraught woman who identified herself as Olango's sister could be heard just after he was shot asking why officers shot her brother after she called for help and told police he was troubled.

Police later said a Psychiatric Emergency Response Team clinician was on another call at the time.

Christopher Rice-Wilson of Alliance San Diego attributed what befell Olango to "three strikes'' -- being black, being mentally ill and not following orders.

"Black lives matter,'' Rice-Wilson said. "And if a black life doesn't matter, then no life matters.''

Authorities disputed claims that bystanders' cellphones were taken at the scene. Only one was voluntarily turned over.

According to friends, Olango was born in Kampala, Uganda, as one of nine children. His mother and siblings emigrated to New York as refugees in 1991, apparently because his father -- who worked for the late Ugandan President Idi Amin -- made threats of violence against them.

The family eventually moved to Southern California, and Olango attended San Diego High School for a time before dropping out, though he later earned a GED. According to his Facebook page, he attended San Diego Mesa College and worked at a Hooters restaurant.