On Monday night, the river of air 35,000 feet above the New York City area, known as the jet stream, clocked in at a blazing 231 mph.

This is the fastest jet stream on record since 1957 for the National Weather Service in Upton, New York — breaking the old record of 223 mph, according to NWS forecaster Carlie Buccola.

This wind provided a turbo boost to commercial passenger planes along for the ride. With the help of this rapid tailwind, Virgin Atlantic Flight 8 from Los Angeles to London hit what could be a record high speed for a Boeing 787: 801 mph over Pennsylvania at 9:20 p.m. Monday night.

"Wow, that's fast," a Boeing spokesman told CBS News via email. But it's not something the plane manufacturer tracks, so they can't confirm if 801 mph is a record.

"The typical cruising speed of the Dreamliner is 561 mph," CBS News transportation correspondent Kris Van Cleave points out. "The past record for the 787 is 776 mph set in January 2017 by a Norwegian 787-9 flying from JFK to London Gatwick. That flight set a record for the fastest subsonic transatlantic commercial airline flight — 5 hours and 13 minutes, thanks to a 202 mph tailwind."

For reference, the speed of sound is 760 mph; but the plane did not break the sound barrier. That's because part of the plane's speed is attributed to the swiftly moving 200 mph+ air surrounding the plane. So relative to the air around it, the plane's speed falls far short.

Jet streams like the one Monday can have a big impact on flights.

"A 100 mph increase in the jet stream above typical can add or remove about an hour from a five to six hour flight," according to a spokesperson from FlightAware, a global aviation software and data services company based in Houston.

While you might be pleasantly surprised by an early arrival going eastbound, you're likely to face delays westbound battling the powerful headwind. While winds of this magnitude do affect air travel, FlightAware said changes in the upper level winds are accounted for.

"The estimated jet stream winds are accounted for in flight planning, and even before that in scheduling you'll see longer block times westbound than eastbound," FlightAware points out.

earth :: a global map of wind, weather, and ocean conditions

In the interactive map above, created by Cameron Beccario, the jet stream intensity can be viewed (updated every three hours).

The record jet stream winds were not only confined to the New York City area, it was a common theme all over the Northeast because of a unique confluence of events.

It all started in the Pacific Ocean: Just last week NOAA declared an official El Niño in the tropical Pacific Ocean. El Niño is a warming of the equatorial sea surface temperatures which can have repercussions thousands of miles away. It is partly responsible for the recent wicked weather in California last week.

"The last couple weeks the atmosphere has been in a much more El Niño-like state because it's teaming up with another natural climate phenomena known as the MJO," said Dr. Adam Sobel, professor of applied physics at Columbia University's Lamont-Doherty Earth Observatory. "The MJO is associated with clusters of thunderstorms and bursts of westerly winds."

As a result of this energetic mix, twin cyclones have formed in the central Pacific and all this activity is spawning an unusually powerful sub-tropical jet stream across Mexico and into the southern U.S.

At the same time, a vigorous polar jet stream in Alaska is splitting into two branches along the Pacific Coast. One is heading east through the Great Lakes, while the other heads south into California and then turns east into the Ohio Valley.

The end result is all three jet streams — along with an assist from the polar vortex — are now merging in the Northeast. This is boosting an otherwise strong jet stream, into a record breaking one.

The confluence of events is much more easily understood by looking at the following illustration: 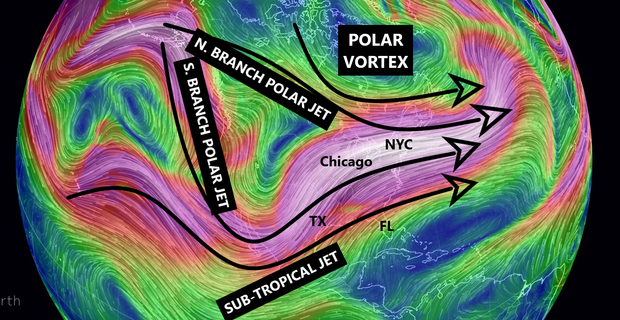 The moist and energetic jet stream will remain in place through the weekend. As a result, dangerous flooding is possible across parts of the Mississippi and Tennessee Valley with a widespread 5-10 inches of rain possible in some areas.