Rep. Duncan Hunter, R-Alpine, and his wife Margaret were indicted by a federal grand jury Tuesday for allegedly using more than $250,000 in campaign funds for personal expenses, including family 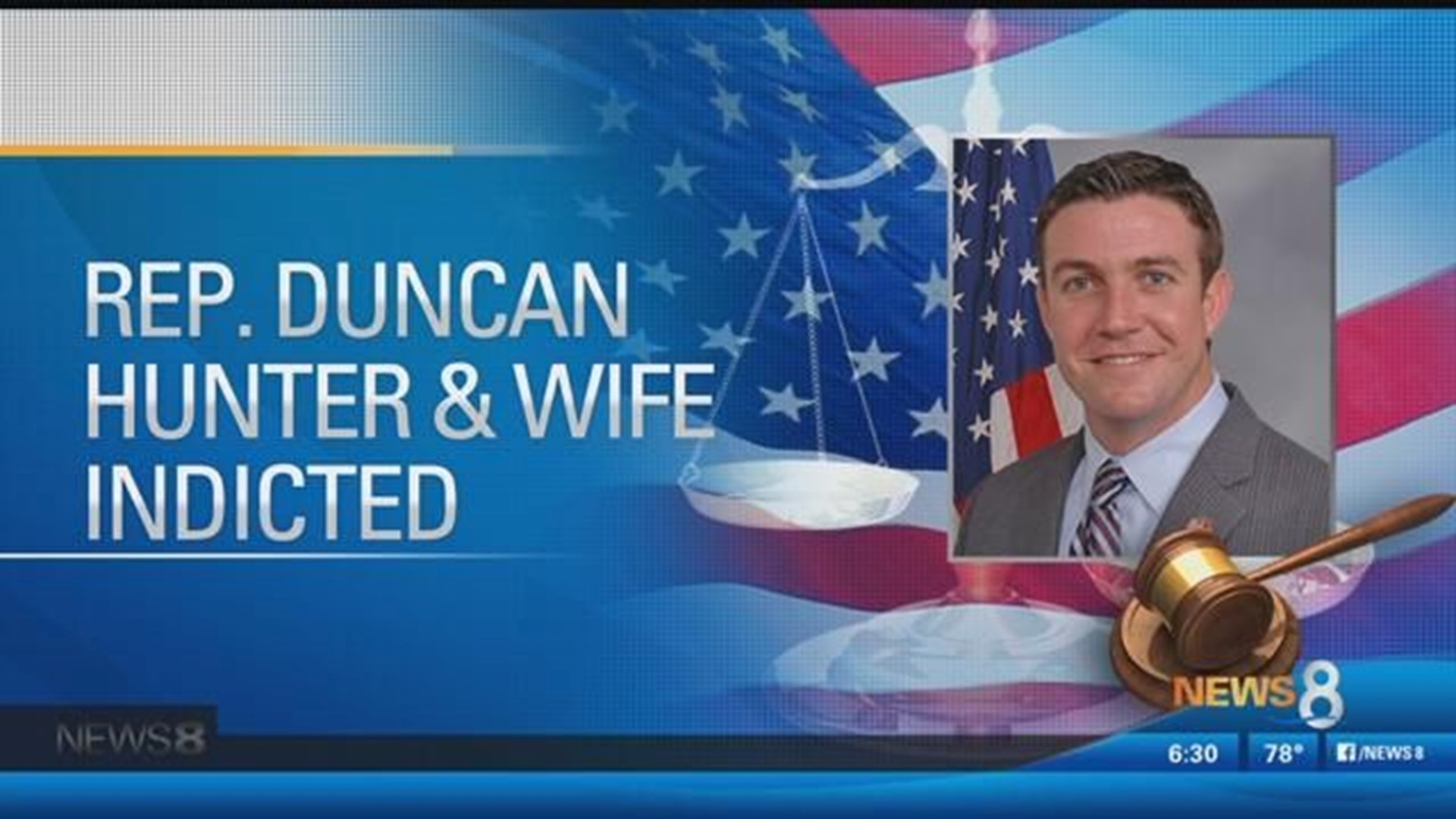 SAN DIEGO (CNS) - Rep. Duncan Hunter, R-Alpine, and his wife Margaret are scheduled to be arraigned Thursday on charges of using more than $250,000 in campaign funds for personal expenses, including family vacations, dental bills, theater tickets and international travel for relatives.

A 48-page indictment, filed Tuesday in federal court in San Diego, accuses the couple of conspiracy to commit offenses against the United States, wire fraud, falsification of records and prohibited use of campaign contributions.

Federal prosecutors said they identified "scores of instances" between 2009 and 2016 in which the couple used campaign funds to pay for "personal expenses that they could not otherwise afford."

Among those personal expenses they allegedly funded with campaign cash were family vacations to locations such as Hawaii and Italy, along with school tuition and smaller purchases such as golf outings, movie tickets, video games, coffee and expensive meals. The indictment alleges that at one point, Hunter used campaign cash to fly his pet rabbit to a family vacation.

One of the pillars of our country since its founding is that those tasked with enforcing the law would do so in an unbiased manner, allowing evidence to dictate how cases should run, with nothing impeding the rule of law.  Unfortunately, this is not the case today.  The fact is that there is a culture operating within our Justice Department that is politically motivated.

We are seeing this with President Trump; we are seeing this with my case.  This is evidenced by the fact that after two years of investigating, the Department of Justice decided to take this action right before my election. For over two years, I have made myself available to cooperate with this investigation in any manner.  To date, I have not been asked one time to answer any questions or address any issue.  I have not had one opportunity to present my side of anything in this investigation or to counter any allegations against me.

All the while, there has been a constant barrage of misinformation and salacious headlines in our media regarding this matter.  I purposely choose to remain silent, not to feed into this witch-hunt and trust the process.

I have focused on one thing; doing the job with which I was elected to do.  I have worked to represent my constituents, voting on policy issues that I believe would benefit our nation and opposing those that would do us harm.  I have helped those having problems with federal agencies and advocating for those who have fallen through the cracks of bureaucracy.  This is what I will continue to do, these efforts will not stop, and I am not going anywhere.

The actions of the Justice Department speak for themselves.  It is a sad state of affairs when those entrusted with upholding the law have no appreciation for following the rule of law.  Consider this; overwhelming evidence indicated that Hillary Clinton took direct action to circumvent investigations into her campaign, she was interviewed and no action was taken.  After two years of investigation into my campaign, I have never been interviewed and they made a decision to prosecute.

Additionally, three prosecutors, two of which are directly involved this case, attended a fundraising event at a private home in La Jolla in 2015, one of which was the individual who signed the indictment.  We know these individuals attended this event from 9:00-12:00 noon during working hours.  We are told that this was at the request of Secret Service to officially assist law enforcement with protection, but this explanation is disputed by former U.S. Attorneys familiar with the responsibilities of their office.  The obvious question is why would the Secret Service need three prosecutors at a fundraising event?  The answer is they are partisan prosecutors.

My constituents are not easily misled.  I know they can recognize a political agenda when they see it and they can disregard empty rhetoric when they hear it.  I fought for our nation against terrorists in the Marine Corps.  I fight for my constituents in the halls of Congress.  I will fight this in the same manner and with the same level of determination because I believe in what I am fighting for and still have faith that evidence and the rule of law will trump political agendas and bias.

Hunter -- like President Donald Trump -- has been critical this year of the Justice Department, calling it "corrupt, answerable to no one and (using) the law to extort the American people and effect political change."

His campaign blasted the timing of the indictment -- about two months before the November general election -- saying it "appears to be an effort to derail Congressman Hunter's re-election in the Nov. 6, 2018, election."

It’s been a tough time for East County with three elected officials at the federal, state and local levels violating the public’s trust. If criminal charges against Congressman Hunter are true, he must resign. At the very least, voters must hold him accountable in November, just as they should with State Senator Anderson and El Cajon Councilman Kalasho, who have embarrassed themselves and failed those they were elected to serve. As Ronald Reagan reminded us, character matters.

Hunter was first elected to Congress in 2008, when he won the seat his father held for 14 terms.

Democrats have been targeting Hunter as a potentially vulnerable candidate, thanks primarily to the federal investigation against him, even though the district has been a longtime Republican stronghold.

In November, Hunter will be facing Democrat Ammar Campa-Najjar, a Department of Labor spokesman during the Obama administration.

"I'm happy to see that justice is being dealt. Nobody's above the law, not even a sitting congressman," Campa-Najjar said. "The people of the district deserve better than a congressman who can't follow the law, much less pass and enforce laws."

Jim Brulte, chairman of the California Republican Party, urged against a rush to judgment.

"In our country, individuals are presumed innocent until a jury of their peers convict them," he said in a statement. "The congressman and his wife have a constitutional promise to their day in court and we will not prejudice the outcome."

House Speaker Paul Ryan, R-Wisconsin, called the charges against Hunter "deeply serious" and removed him from his committee assignments "pending the resolution of this matter."

Hunter was a member of the Transportation and Infrastructure Committee, and chairman of its Subcommittee on Coast Guard and Maritime Transportation, the House Armed Services Committee and Education and the Workforce Committee.

Hunter’s Father: I think we will win this trial!