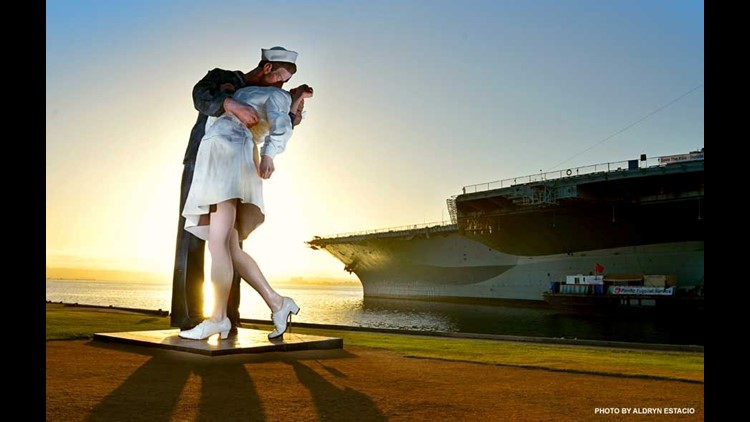 SAN DIEGO (CNS) - The replacement "kiss" statue depicting a sailor stealing a kiss from a nurse at the end of World War II was permanently bolted to its pedestal at the San Diego waterfront Wednesday.

A crane hoisted the 25-foot-tall statue onto the pedestal at the G Street Mole at the downtown San Diego waterfront.

The replacement "kiss" statue arrived at the San Diego waterfront Monday morning. The statue  replaced "Unconditional Surrender," the 6,000-pound sculpture by J. Seward Johnson that was loaned to San Diego from 2007 to early last year. That statue is owned by the Santa Monica-based nonprofit Sculpture Foundation and was taken from San Diego to New Jersey for restoration.

The original is made of a foam core with a urethane outer layer and is susceptible to weather damage, while the replacement is made of more durable bronze.

Edith Shain, a former Los Angeles schoolteacher, claimed to be the woman in the photograph. She attended the unveiling of the original statue in San Diego and appeared at other local events before she died in 2010 at the age of 91.

A dedication ceremony is scheduled for Saturday at 10 a.m., in which several couples married during World War II are expected to renew their vows.