Brittany Maynard made national news when she moved to Oregon to end her life on her terms when facing terminal brain cancer in 2014. 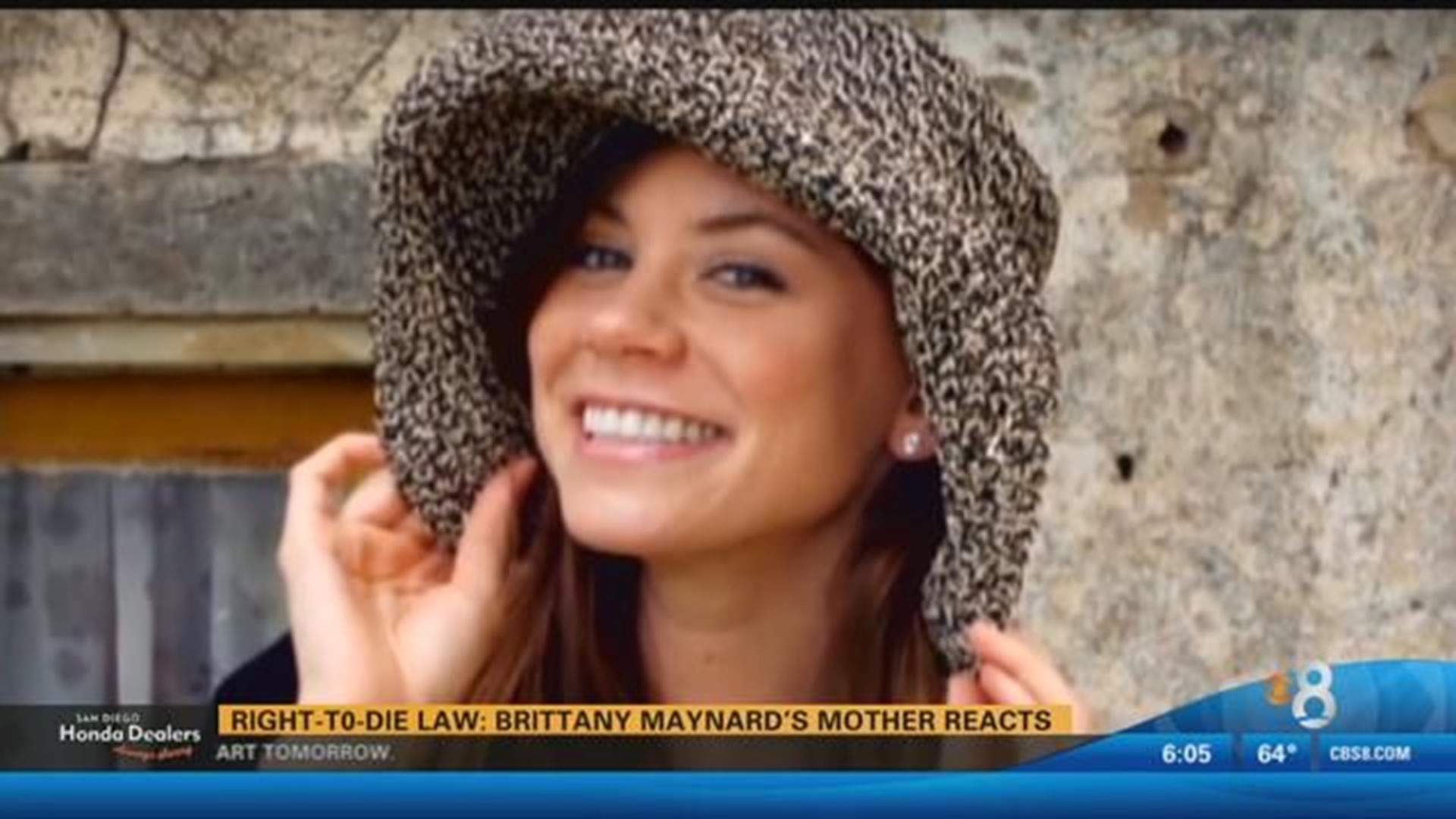 CARLSBAD (CBS 8) - Brittany Maynard made national news when she moved to Oregon to end her life on her terms when facing terminal brain cancer in 2014.

On Monday, Gov. Jerry Brown signed legislation Monday allowing terminally ill people in the nation's most populous state to take their own lives, saying the emotionally charged bill forced him to consider "what I would want in the face of my own death."

Brittany's mother, who resides in Carlsbad reacted to the news with gratitude.

"I was extremely touched because it's not just like signing a bill, he wrote a letter to Californians," said Deborah Ziegler, Brittany's mother.

Her daughter, 29-year-old Brittany, was told she had brain cancer and six months to live. She her and husband moved to Oregon where she could choose the right-to-die.

"I feel a huge sense of pride in Brittany for her speaking up for what she started this conversation last year," said Dan Diaz, Brittany's widower.

Brittany fought for the right in California till the day she died last November.

The law allows two different doctors to approve a lethal dose of medication for terminally-ill patients to end their lives.

Critics have said this is premature suicide for the vulnerable.

"It exposes those without means and the ability to speak for themselves to the danger of having their life terminated for cost," said Ken Barnes, with Californians Against Assisted Suicide.

The governor, a former Jesuit Seminarian, wrote a personal statement saying he spoke with Maynard's family, Archbishop and doctors in part says:

"In the end, I was left to reflect on what I would want in the face of my own death. I do not know what I would do if I were dying in prolonged and excruciating pain. I am certain, however, that it would be a comfort to be able to consider the options afforded by this bill. And I wouldn't deny that right to others."

"I feel like he went on part of the journey with us. He didn't lose a daughter but I think he felt some of the emotions he felt and I am very appreciative of that," said Deborah.

Brittany did a lot of traveling before she died. Her mother said she is going to continue those adventures and plan a trip to Peru and climb Machu Picchu.

She is also working on a book to help other families facing a decision to legally end their lives.

Oregon was the first state to pass a right-to-die law, with Montana, Washington, Vermont and now California following suit.

The law will go in effect 90 days after special session adjourns.