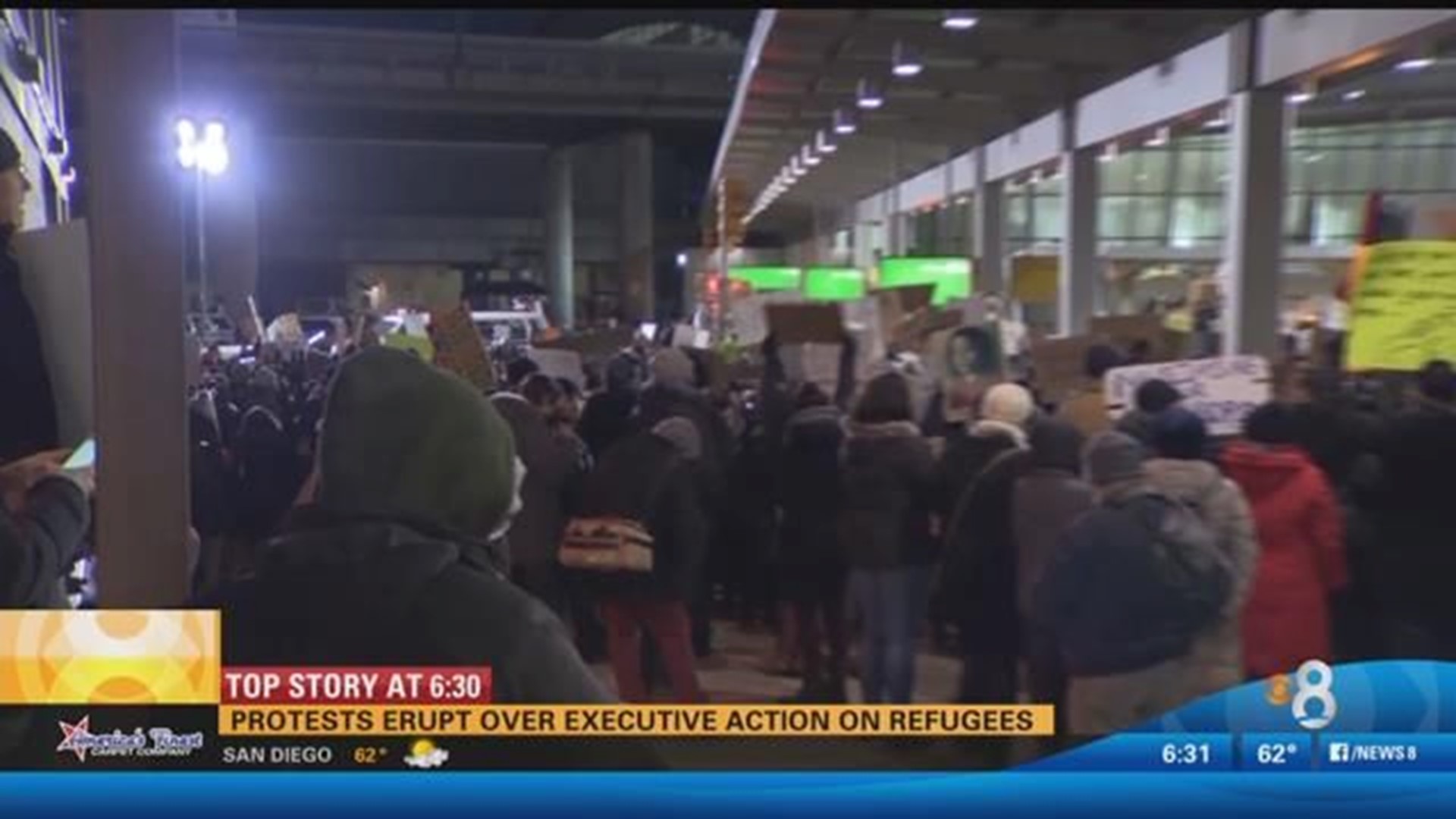 An estimated 2,000 people swarmed the area outside of Terminal Two Sunday starting in the mid-afternoon. Protestors held signs in solidarity with those affected by the travel ban. Airports nationwide became rallying points after several people were detained under the new policy, although none were reportedly detained in San Diego.

As of Monday midday, there was no word on if the protests at Lindbergh Field would continue Monday night.

Bishop Robert McElroy of the Roman Catholic Diocese of San Diego issued a statement on the ban that said in part:

Rather, this executive order is the introduction into law of campaign sloganeering rooted in xenophobia and religious prejudice. Its devastating consequences are already apparent for those suffering most in our world, for our standing among nations, and for the imperative of rebuilding unity within our country rather than tearing us further apart.

The Bishop also said, "we cannot and will not stand silent."

“I'm Muslim and I think what is happening is disgusting and vile and this doesn’t represent the America that I know and I love,” said Swanson.

“Our country is made up of immigrant. Trump's wife is an immigrant. We all need to be welcoming to these people. This is what make this country what we are,” said Grace Oliever.

Protestors said they will continue to demonstrate as long as it takes to effect change and while at some similar demonstrations around the country, including LAX, there were a small number of counter-protestors that was not the case here in San Diego.

Sunday's event was organized by San Diego Democrats for Equality and billed as "the resistance follow up" and "Muslim ban protest."

Another demonstration was held in North County on a street corner in Vista on Sunday. The crowd was estimated to be about 200 people at that protest.

Earlier on Sunday, a meeting was held at East African Cultural Center in City Heights to talk about the local impact of Trump's executive orders.

The ACLU filed a class action lawsuit on behalf of two men who were detained in New York, based on the President's order.

On Saturday, a federal judge blocked part of President Trump's order, saying the government cannot deport people who already hold visas or have refugee status in the US.

It does not prevent the government from detaining them.

The injunction is only temporary until lawyers from both sides can argue the case, which may depend on Mr. Trump's statements on the campaign trail.

While President Trump stressed the order was not a Muslim ban, the ACLU is arguing otherwise to make the ruling permanent.

The White House - faced with confusion in customs checkpoints and the nationwide airport protests - apparently backed off significantly Sunday.

White House Chief of Staff Reince Priebus told media that all green card holders would not be prevented from entering the United States.

The San Diego Chapter of the American Civil Liberties Union put out a message on social media saying "If you, or anyone you know, is being detained at SAN airport due to Muslim ban, please contact us directly. 619-398-4485 #KnowYourRights #NoBanNoWall."