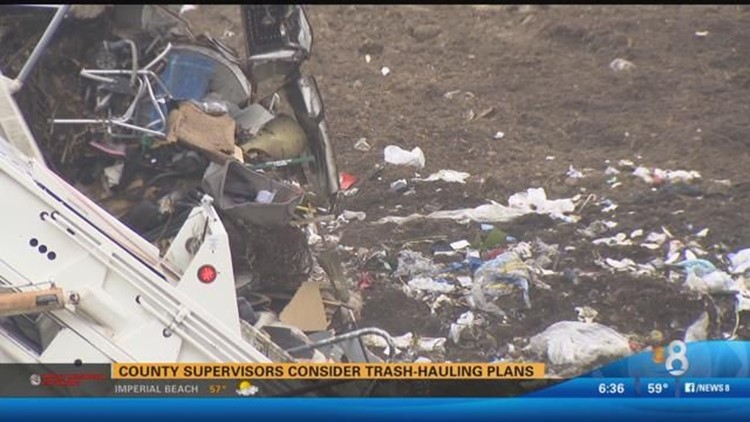 The Board of Supervisors is scheduled Wednesday to consider a plan to reduce the amount of waste that goes into landfills from San Diego County's unincorporated areas by 75 percent by 2025.
Author:
Published: 5:08 AM PDT April 26, 2017
Updated: 2:32 PM PDT April 26, 2017

SAN DIEGO (CNS) - The Board of Supervisors unanimously approved a plan Wednesday to reduce the amount of waste that goes into landfills from San Diego County's unincorporated areas by 75 percent by 2025.

The vote was 4-0, with Supervisor Greg Cox absent.

Current programs led to the diversion of 62 percent of waste in 2015. Staff said getting up to 75 percent will necessitate a "significant, well-planned and well-funded effort."

County staff recommended the board adopt the approved option because it "provides adequate time for industry to develop the necessary organics processing infrastructure, requires less staffing in initial years, lowers costs to customers, the industry and the county, and is supported by industry."

The supervisors directed staff two years ago to develop the plan, which included a secondary goal of virtually eliminating waste going into landfills by 2040. Staff is recommended waiting until the 75 percent goal is achieved before the county turns to the even more ambitious target, so they can evaluate changes in waste generation and management between now and then.

The county doesn't collect trash itself, unlike the city of San Diego.

Instead, the county government contracts with private haulers.

"This option supports the county's vision and accommodates a clear need for a more sustainable funding stream to support the environmental programs that your board and staff recommended," said Jim Madaffer, executive director of the San Diego County Disposal Association.

The supervisors' vote means a franchise fee of $2.35 per ton of solid waste paid by haulers will rise to $6.96 per ton and encompass nearly all waste - with the exception of dirt, rock, sand and similar materials. The fee hasn't changed in 20 years.