With much up in the air regarding the status of the Chargers, Mayor Kevin Faulconer is preparing to deliver his second "State of the City" address Thursday night. 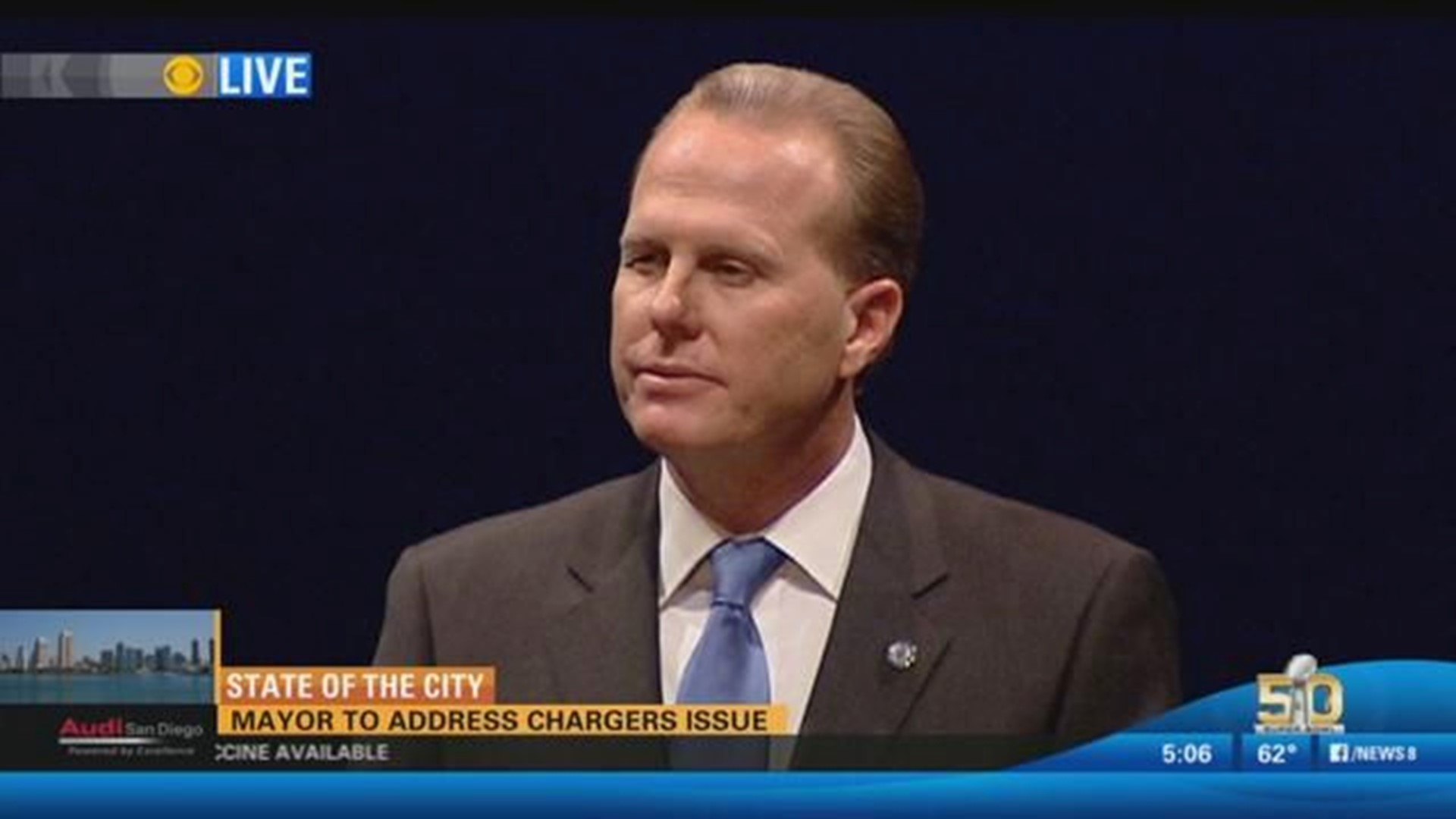 SAN DIEGO (CNS) - Mayor Kevin Faulconer said it's not too late to keep the Chargers in San Diego during his second "State of the City" address at the Balboa Theatre Thursday night.

Faulconer said that with the crafting of a financing plan that doesn't include new taxes, and the assembling of experts to design a stadium and conduct an environmental review, the city and county of San Diego have accomplished more on the Chargers behalf in the last 10 months than has been done in the past 10 years.

"Our San Diego family has stood with the Chargers in victory and defeat for more than 50 years -- that ought to count for something," Faulconer said.

"This franchise has prospered because of generations of loyal fans," Faulconer said.

In his first "State of the City" speech last year, Faulconer warned that "at no point in San Diego's history has the possibility of the Chargers moving to Los Angeles been more real," and announced he would appoint a task force to study building a stadium for the local National Football League franchise.

The group proposed a project to replace 48-year-old Qualcomm Stadium in Mission Valley, but the Chargers broke off talks with the city and county of San Diego in June.

Faulconer spoke tonight two days after the NFL offered the Chargers a one-year window to move to Inglewood, where they could play in a future stadium alongside the Rams.

League owners on Tuesday approved the Rams' return to Los Angeles from St. Louis and rejected a plan by the Chargers and Raiders to build a stadium in Carson.

Faulconer acknowledged the "twists and turns" that have taken place this week by saying, "I hope I'm reading the right version of the speech right now," drawing laughter from the audience.

The approximately 50-minute speech wasn't all about football.

Faulconer also unveiled a major initiative to upgrade city parks, which will include planning to make improvements at the 76-acre De Anza Cove Mobile Home Park. The city has resolved its longest-running litigation, with residents of the facility.

"More recreation areas on and around the water, hiking, camping, trails for biking and walking -- restoring our wetlands," Faulconer said. "These are some of the exciting possibilities to transform this place into a fantastic waterfront experience."

Faulconer said the cove will be "San Diego's next great public space."

Faulconer said he was also working with the San Diego Unified School Districts to make parks on campus properties available to the public when schools aren't in session.

Faulconer also endorsed a plan to fund infrastructure projects authored by Councilman Mark Kersey, and urged the City Council to place the proposal before voters, said he's enlisting 100 local companies to hire 1,000 mostly low- income youth, and setting a goal of getting 1,000 homeless veterans off the streets by the end of this year.

After the speech, Kersey said his funding plan should go before the City Council by the end of this month.

"With voter approval in June, San Diego will have a dedicated and long- term funding stream for infrastructure improvements," Kersey said. "Infrastructure is not a `problem' to be solved, it is a core function and responsibility of the city."

"Last year's was also full of promises and I don't think the mayor followed through on even half of them," Alvarez said. "Less than half. So this year I wish the mayor more success on following through, and I'm happy to help in any way that I can."

As is customary with such speeches, Faulconer touted numerous accomplishments over the past year, among them an improvement in emergency response times in Southeast San Diego, the opening of a fire station in Mission Valley and continuing planning for others, negotiating an extension for Comic- Con International to remain at the San Diego Convention Center for a couple more years, gaining City Council approval of a plan to address climate change, and shifting strategies to combat homelessness.

His speech comes at the beginning of an election year in which he doesn't face significant opposition for re-election.

However, races for the three City Council districts that are coming open are expected to be struggles, as is the campaign to succeed Goldsmith. Several major ballot measures will go before voters, including one to raise the minimum wage.