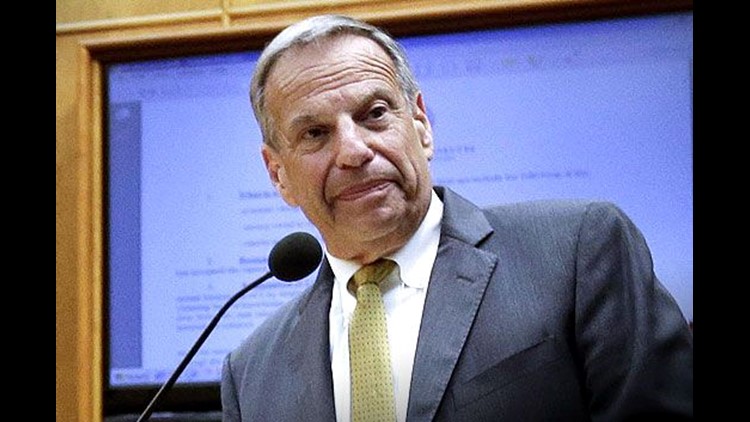 SAN DIEGO (AP) — San Diego Mayor Bob Filner is leaving office in disgrace amid sexual harassment allegations and many unanswered questions, including how someone who acknowledged mistreating women for many years could have survived for so long in politics.

The former 10-term congressman leaves office Friday, less than nine months into a four-year term and one week after a defiant farewell speech in which the onetime civil rights activist told the City Council he was the innocent victim of a "lynch mob."

Only Filner and perhaps a small circle of advisers know how his behavior went undetected, and they aren't talking.

But those who know him say he may have been more easily exposed as leader of the nation's eighth-largest city than as a congressman working in relative obscurity. His behavior also may have deteriorated after being elected mayor.

Two months ago, a former city councilwoman and longtime supporter declared him unfit for office and a woman who took a $50,000 annual pay cut to be his communications director said he asked her to work without underwear, demanded kisses and put her in headlocks.

He was, in the end, forced out by those who most embraced his liberal ideals.

Lori Saldana, a former Democratic state assemblywoman, said five or six women she invited to speak at a women's studies class she taught at San Diego State University in 2011 confided they were previously targets of advances that fit a familiar pattern.

They said he managed to get them alone at a meeting or public event and startled them with hugs, flattery and proposals for romantic relationships. The women — civic and elected leaders — didn't know he behaved the same way toward others and didn't think of going public, she said.

Saldana said she raised concerns at the time with Jess Durfee, then-chairman of the San Diego County Democratic Party.

Durfee said he confronted Filner and was assured not to worry. Durfee said he took Filner at his word, noting that he had no names or firsthand accounts and that Filner and Saldana had a rocky history.

Saldana said she suspected Filner may have escaped scrutiny because he was thousands of miles from voters and outside the media spotlight.

"In Washington, when you're one of 535 representatives, you're not under the same microscope. In fact, you're fighting for attention. That, in some ways, works to the advantage of someone like Filner," she said.

A mayoral spokeswoman referred questions for Filner to his law firm, Payne & Fears LLP, which didn't respond to an email or phone call.

As he won elections, Filner, 70, won admiration from voters for his work ethic and tenaciousness. He also had a reputation for demeaning employees and lashing out at perceived adversaries.

He was a fastidious boss, with strict rules on the size of paper clips and color of ink that employees used, said Thaddeus Hoffmeister, his legislative director from 2004 to 2007. Getting yelled at was a "rite of passage."

Filner paid unusual attention to individual constituent complaints, whether it was a missed Social Security check or a military medal that never arrived, said Hoffmeister, now a law professor at the University of Dayton.

Hoffmeister said Filner had a brusque manner and lacked personal skills, but he never saw or heard him behave inappropriately toward women.

Bronwyn Ingram, who ended her engagement to the twice-divorced mayor just before the scandal erupted, has said Filner turned more aggressive, sending sexually explicit text messages to other women and asking them on dates in her presence.

Filner's world began to unravel at a June 20 staff meeting when his deputy chief of staff, Allen Jones, and his communications director, Irene McCormack Jackson, confronted him over his behavior and quit.

Two supporters, Councilwoman Donna Frye and environmental attorney Marco Gonzalez, met privately with Filner days later and were unconvinced he would change. They joined another attorney, Cory Briggs, at a news conference July 11 to demand a resignation.

McCormack Jackson was the first woman to go public and is still the only one to sue. Then came nearly 20 others. A special election to replace Filner has been set for Nov. 19.

Morgan Rose, a psychologist at San Diego Unified School District, watched the news conference and called Briggs to say she could no longer stay silent about a meeting with the then-congressman at a Washington restaurant in 2009 to discuss her child-welfare advocacy group, America's Angel.

Rose said Filner told her first lady Michelle Obama wanted her to draft a memo about her efforts and, seconds later, moved across the booth, cornered her inside and tried to kiss her four times on the lips.

She said she decided not to report it because she feared for her personal safety and didn't want to jeopardize his support.

"There was no way after the years I put in to even get (the project) on the radar, much less the top of the priority list, that I was going to compromise that," Rose said.