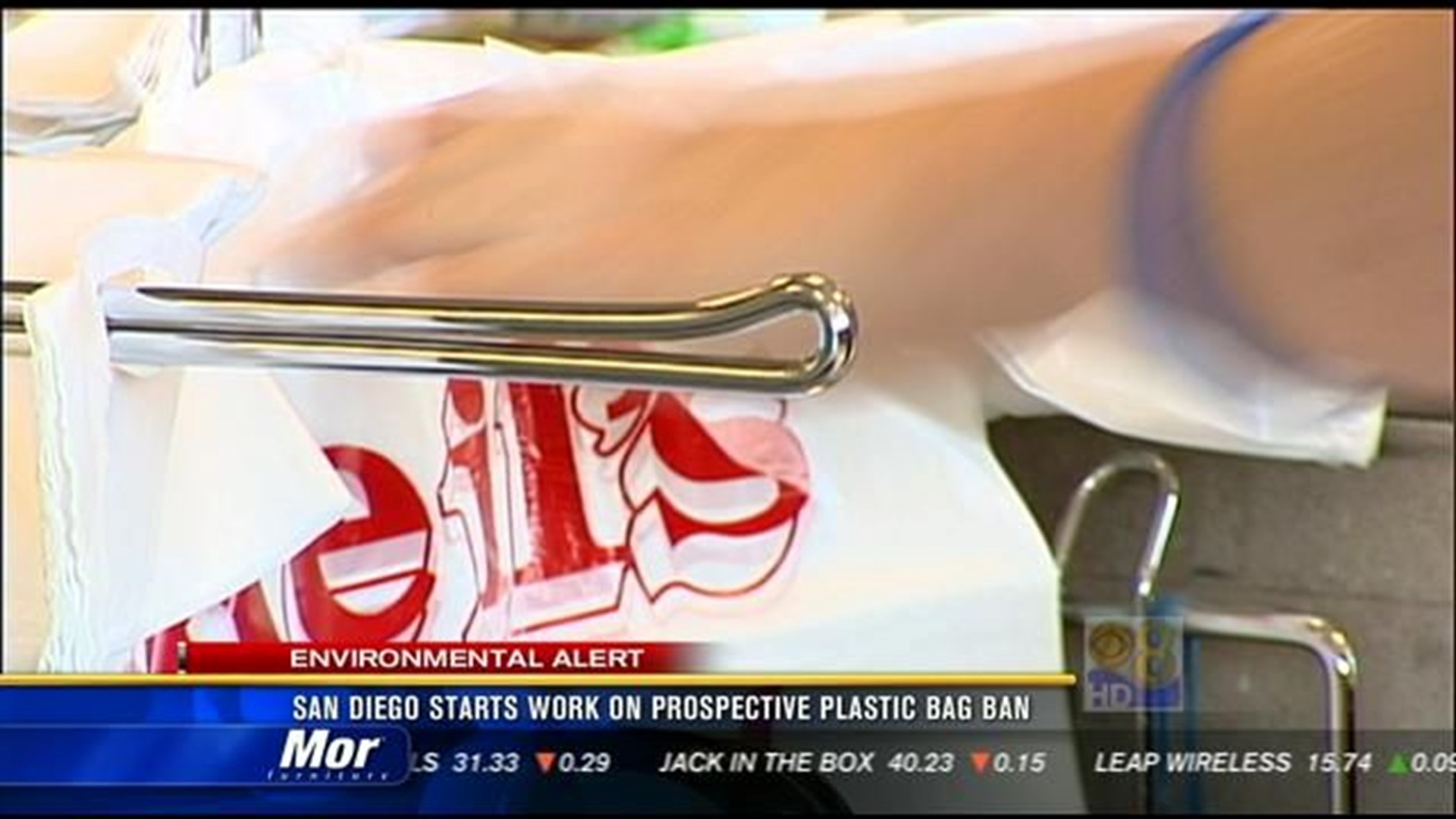 SAN DIEGO (CNS) - The City Council's Rules and Economic Development Committee Wednesday unanimously directed staff to develop an ordinance to ban the use of plastic bags at grocery stores and other retail outlets in the city of San Diego.

Nearby Solana Beach is among nearly 80 cities in California, including Los Angeles and West Hollywood, which prohibit or restrict plastic bags, which are considered a threat to the environment. The city of Encinitas is also developing a plastic bag ordinance.

The proposal would also require stores to charge customers 10 cents per paper bag used as an alternative but exempt restaurants, nonprofits, food stamp recipients, and produce and meat products. The city would provide for distribution of reusable bags and public education.

"San Diego is poised to become one of the largest cities to take such a positive step towards bettering our environment," said committee Chairwoman Sherri Lightner. "This is about protecting our ocean, our canyons, our waterways and landfills."

She said residents also need to learn better habits, because they don't return plastic bags to stores for recycling and frequently leave their reusable bags in their car trunks when they shop.

The committee asked the mayor's office to conduct outreach efforts with environmental groups and businesses that would be affected by an ordinance, and for the City Attorney's Office to draft a law.

"We need to know what new regulations may cost our local businesses, who have struggled for years in a tough economy," Councilman Mark Kersey said.

"We must solicit input from a broad group of stakeholders and address their needs as part of any ordinance process," Kersey said. "Those stakeholders should include environmental experts -- whom we heard Wednesday morning, consumer advocates, trade groups and business owners who would be impacted by this proposed ban."

Representatives of a couple of industry groups told committee members that they hadn't heard about the proposed ban until a few days ago.

Sarah Paulson Sheehy, of the California Grocers Association, said her organization was "comfortable" with a prohibition on the bags, but asked for a law that included all retailers and was consistent with regulations in other cities.

She said in places where the restrictions were in effect, reusable bags were brought in by more than 90 percent of customers within six months of adoption.

"Plastic bags cause environmental damage that can be avoided with the ordinance being considered," he said. "Our neighborhoods, our beaches, our waterways, our landfills and our overall environment will benefit from fewer plastic bags. I will work with city staff to develop an effective ordinance."

San Diego's Environmental Service Department spent $160,000 in the most recent fiscal year cleaning up plastic bags, especially ones that float around the Miramar Landfill when caught up in the breeze.

Environmentalists contend that plastic bags are a major category of debris found on beaches, watersheds and oceans, where some marine mammals and birds try to consume them.

Staff will return with an update on their progress at a committee meeting scheduled for Oct. 23.