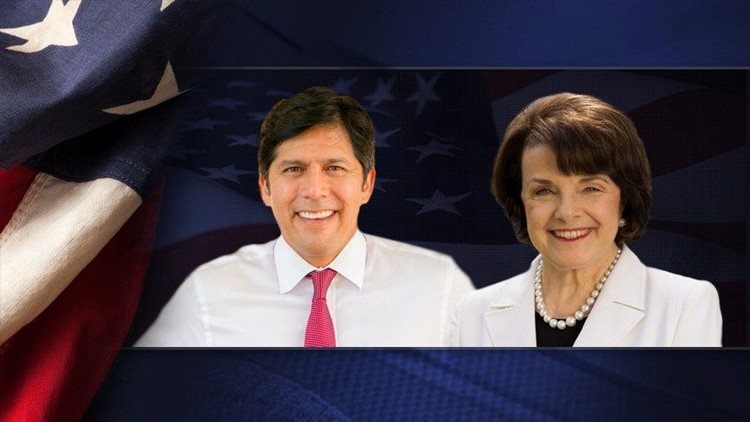 Sen. Dianne Feinstein and Sen. Kevin de Leon to face off in November

Sen. Dianne Feinstein and Sen. Kevin de Leon to face off in November

LOS ANGELES (CNS) - Sen. Dianne Feinstein, D-California, easily cruised into the November general election as she looks to retain her seat, and she will face Democratic state Sen. Kevin de Leon, who outlasted a challenge by Republican James P. Bradley to also reach the runoff.

Thanks to the state's top-two primary system, the top two vote-getters in the primary advance to the November runoff, regardless of party affiliation. A total of 32 candidates were on the ballot in Tuesday's primary.

De Leon and Bradley were in a neck-and-neck race much of Tuesday night, but de Leon slowly began pulling away as the vote-counting continued. But neither candidate came anywhere close to Feinstein in the race.

"... Together, in this election, we must dedicate ourselves to those values, because they have made California a great state, ending the one-party control of our federal government and moving our nation away from division and polarization. Again, thanks so much for your support and for your faith in me. I'm not going to let you down. Now it's on to November."

Feinstein has represented California in the Senate since 1992 and is considered by many political analysts to be a centrist Democrat, although she appears to have moved to the left on some issues during the campaign as de Leon has attempted to position himself as the more progressive choice.

Feinstein used be in favor of the death penalty and is now opposed to it. She also used to oppose recreational marijuana but now supports it, and her shifts on both issues are seen as an abandonment of her image as a tough-on-crime soldier in the war on drugs.

Feinstein is perhaps best known as a strong advocate for gun control and for being the author of the 1994 Federal Assault Weapons Ban, which expired in 2004. She has made gun control a focus of her current campaign as the issue has been a national talking point in the aftermath of several mass shootings.

De Leon represents the state Senate's 24th District, which encompasses downtown and East Los Angeles. He has sought to position himself as the more liberal, more progressive choice for Democrats, and in particular one who will be a tougher critic and enemy of President Donald Trump.

"This nation was built on the promise that anyone willing to risk it all to come here -- regardless of who they are or where they came from -- could have a fair shot at a hard day's work, afford a roof over their head, affordable healthcare and an equal opportunity to succeed," de Leon said in a statement Wednesday. "It's time California had a United States Senator committed to making good on that promise. Voters deserve a spirited debate in the coming months on the issues they care about most and the challenges facing our state."

De Leon called Tuesday's election "a referendum on a broken establishment in Washington, D.C., that has stopped working for the people of California."

De Leon, the first Latino president pro tem of the California Senate in more than a century, has seized on comments that Feinstein made when she said voters should have "patience" with Trump and that she still hoped he could be a :good president." De Leon has said the comments, and Feinstein's
reputation as a pragmatic centrist, make her the wrong choice to challenge Trump on immigration and other issues, as the president is deeply unpopular in
California.

Bradley's success in polls had confounded some political experts, as little is known about him and he has raised little money. Why he has stood out among Republican voters is unclear. Paul Mitchell, vice president of the bipartisan voter data firm Political Data, opined that Bradley's support in an early UC Berkeley Institute of Governmental Studies poll was because it listed the candidates in alphabetical order, and he was the first GOP candidate with "an Anglo-sounding name" and a respectable-sounding job of chief financial officer, according to the Sacramento Bee.

Bradley himself told The Bee he was "shocked" at the poll, but his support held in last week's IGS poll, which found him still leading all other Republicans despite the names appearing in a different order.