A man threatened to jump from a bridge near downtown San Diego Friday afternoon, causing the closure of state Route 163 while police attemt to negotiate with him. 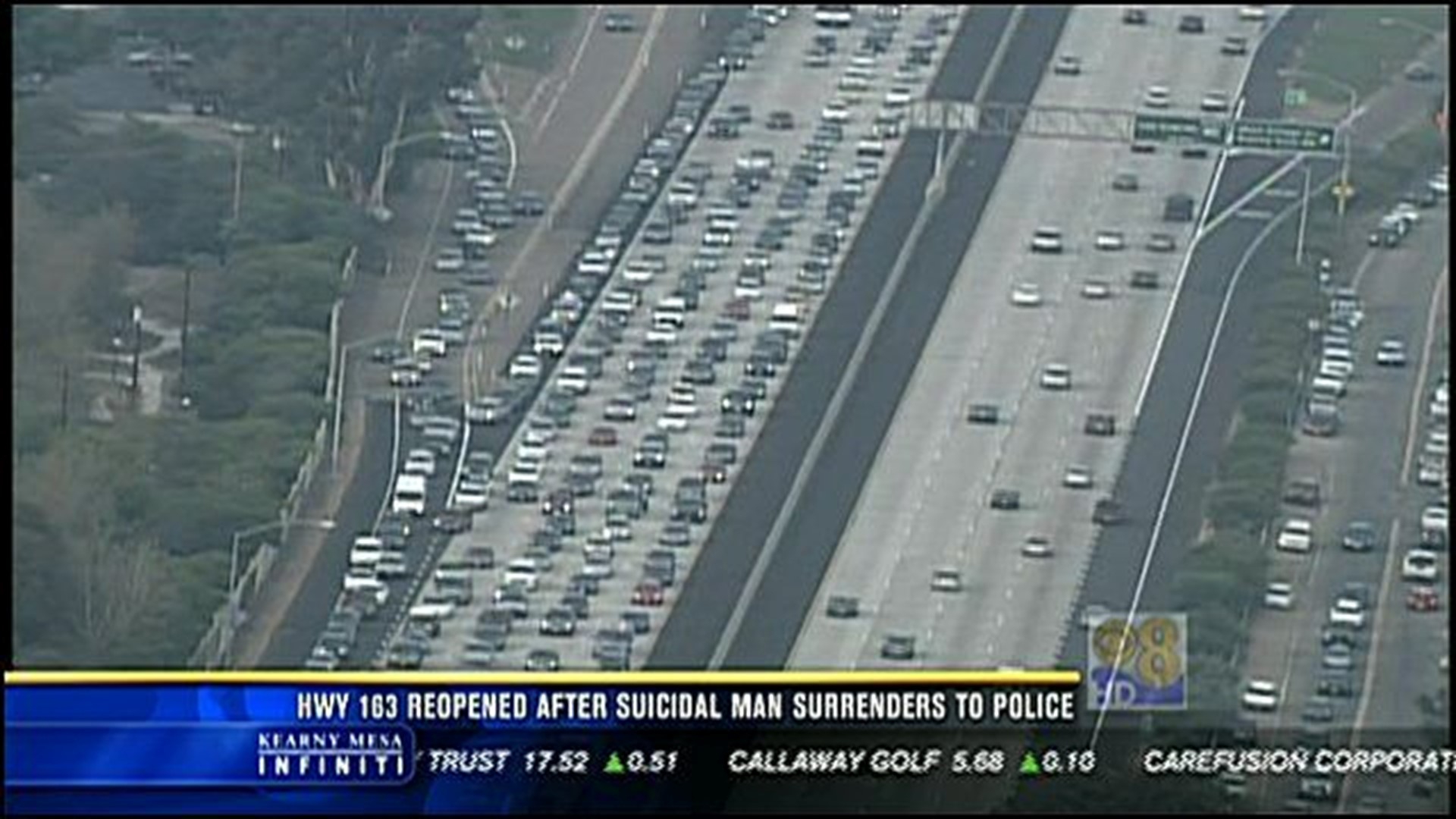 SAN DIEGO (CNS) - A frustrated medical marijuana activist who walked onto a freeway overpass in Hillcrest, holding up traffic for nearly seven hours because police feared he might jump, was eventually taken into custody and to a mental hospital, police said Saturday.

The man, who surrendered to police on state Route 163 at University Avenue about 8:40 p.m. Friday, was arrested, but no booking information was made public. He was believed to be held involuntarily for a 72-hour psychiatric examination.

Traffic backed up on southbound 163 as far as the Interstate 805 split, I-805 backed up to state Route 56 and Interstate 8 was jammed from Interstate 5 to the 805, while authorities tried to persuade the man to give up.

The man sent an email to some news organizations Friday before walking onto the overpass about 2:20 p.m., police said. He said he had been a district manager for three marijuana collectives and described his allegations against police.

He also called a local news stations and told someone he had a list of demands for District
Attorney Bonnie Dumanis, a medical marijuana opponent who is running for San
Diego mayor.

"He's not really suicidal or despondent," San Diego police Lt. Andra Brown said. "He's doing this as a protest, to make his point."

Under state law, authorities can place a person on a 72-hour psychiatric hold if they are deemed dangerous to themselves or others. It was unclear what crimes, if any, the man might face.

SAN DIEGO (CNS) - An apparently suicidal man climbed onto the edge of a bridge over state Route 163 in Hillcrest and threatened to jump Friday, forcing a full closure of a stretch of the freeway and tangling traffic for hours.

The standoff on the University Avenue overpass just north of Balboa Park began shortly before 2:30 p.m., according to the California Highway Patrol.

Police sent negotiators to try to talk the man off the precipice. The CHP and Caltrans shut down the freeway between Interstates 8 and 5, first the southbound lanes and then the northbound ones.

At one point, the man on the bridge was speaking via cellphone to a television station, San Diego Police Department public affairs Lt. Andra Brown said. He had some kind of "list of demands," she said.

As Friday evening rush hour got fully underway, the closure was causing extremely heavy traffic backups for miles on Interstates 8 and 5 and surrounding routes, according to police.

The stalemate was ongoing as of 6:40 p.m., Officer David Stafford said.