Throughout the pandemic, government officials have struggled to accurately track the thousands of vulnerable seniors and disabled people who contracted COVID-19. 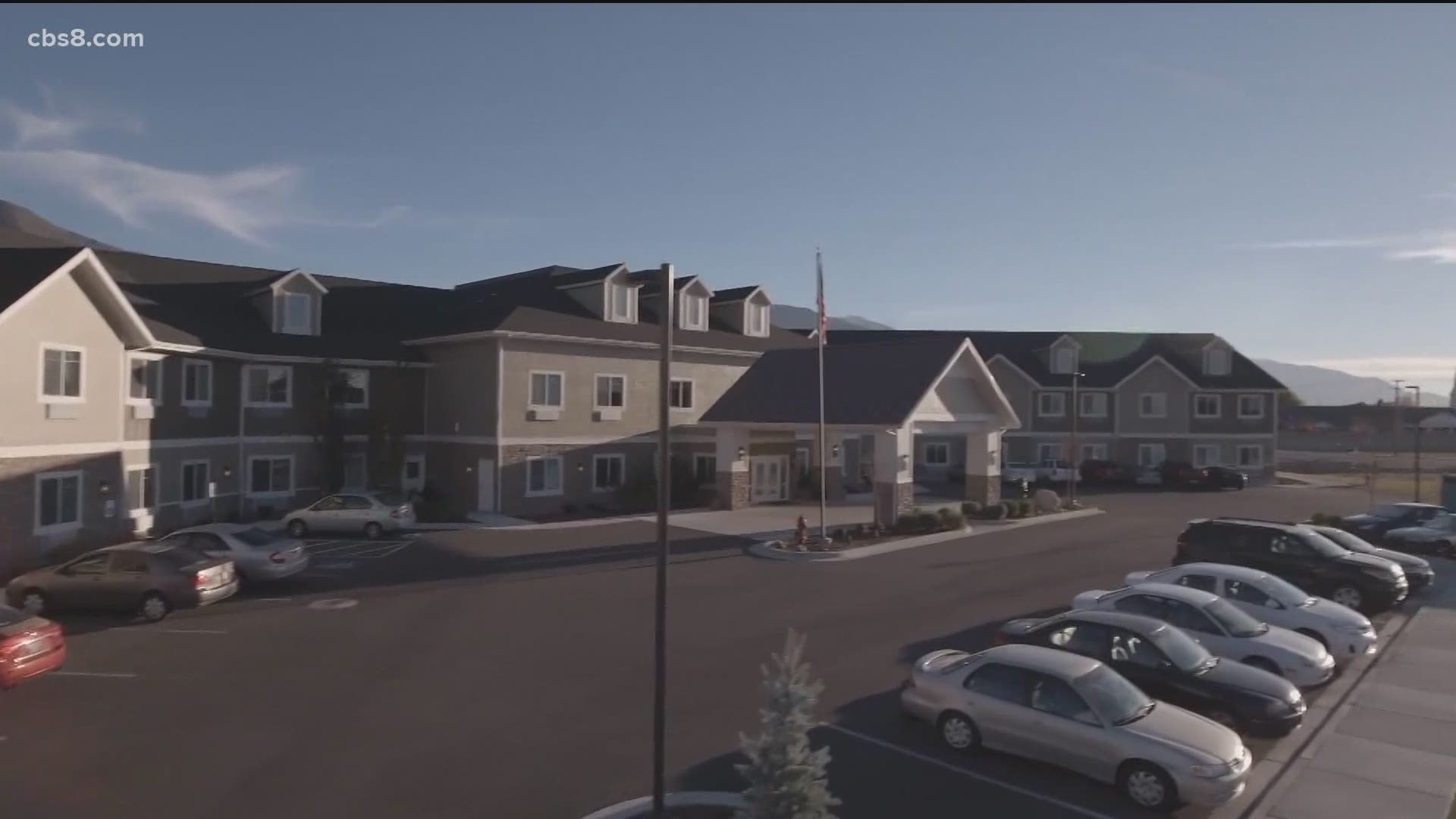 CALIFORNIA, USA — Even a top epidemiologist, let alone a family member, might find it hard to tell just how many of the New Vista Nursing and Rehabilitation Center’s elderly and frail residents fell ill or died of COVID-19 in recent weeks.

County officials reported that 45 patients at the 121-bed nursing home in Los Angeles were infected. Eleven had died as of June 1.

But a look at state and national data revealed something different: the California Department of Public Health showed that New Vista had 45 cases but no deaths, and federal data released June 4 showed no cases or deaths at all.

Throughout the pandemic, government officials from the smallest of California counties to Washington, D.C., have struggled with the critical task of tracking the tens of thousands of vulnerable seniors and disabled people who contracted COVID-19 in nursing homes. They have partly relied on these homes to self-report. They also have changed methodologies and set up electronic reporting systems that didn’t always work as planned.

It’s an especially daunting task in California, requiring the good-faith efforts of 1,224 skilled nursing facilities that serve a frail population of about 120,000. A CalMatters data analysis finds that the state has both over-reported and under-reported COVID-19 cases and fatalities for individual homes. One Pacific Grove nursing home in late May was reported as having a death when it did not.

Preliminary federal data released in early June for every nursing home in the country has complicated the picture even more.

As a result, it’s nearly impossible for the public to tell for sure how many COVID-19 positive residents and workers any one nursing home or assisted living facility has on any given day, or has had earlier in the pandemic.

Public health experts say it’s not surprising that gathering COVID-19 case data is a messy undertaking during a fast-moving pandemic when testing still remains limited and people can infect others without ever showing symptoms.

“We’re almost at 2 million cases nationally – this is unprecedented in terms of case counting,” said Dr. Jeffrey Engel, who recently stepped down as executive director of the Council of State And Territorial Epidemiologists, and is now the group’s senior adviser. Engel said public health officials must gather data as accurately as possible, but what’s more important is how quickly and competently they respond to individual outbreaks in skilled nursing facilities.

Still, the rapidly changing data makes it hard for families who need to move a loved one into a nursing home or assisted living facility – or monitor relatives already there – to get information they need to make decisions. Outside professionals, such as occupational therapists or physicians, who regularly visit skilled nursing facilities, also want to know what they’ll face when they arrive.

And, inconsistent data makes it hard for lawmakers to see if their policies are working, said state Sen. Richard Pan, a Sacramento Democrat.

“We’re not waiting for perfect data before making policy decisions,” said Pan, a physician, “but we need good data to tell us how what we’re doing is helping.”

The stakes couldn’t be higher. On June 16, California’s public health agency reported that 11,432 nursing home residents had tested positive for COVID-19 since the pandemic began and 2,154 had died.

Starting in April, California made data about the state’s 1,224 individual skilled nursing facilities public, joining at least 31 other states that have released lists of facilities with COVID-19 cases. Lee praised the state for its transparency, even if flawed, noting that Arizona state officials successfully went to court to prevent the public release of information from specific homes.

But California’s facility-level information at first wasn’t easy to find, requiring a number of clicks on the Department of Public Health’s website and the ability to download a spreadsheet. Now, you can search the agency’s online database, updated daily, for the name of a specific skilled nursing facility. You have to dig deeper into the agency’s website to find a list of assisted living facilities with COVID-19 cases, however, and that information isn’t searchable.

That poses a challenge for families who may have to urgently find a skilled nursing facility or assisted living placement for a relative who is recovering from a fall or illness and needs significant care, Lee said.

“They’re like deer in the headlights and they don’t know where to turn,”Lee said. “Families want honesty.”

The California Department of Public Health notes many caveats on its data, including that facilities self-report data, and that deaths of skilled nursing residents that occur in hospitals after 14 days may not be reported as nursing home deaths. In some cases, deaths may be double-counted and not coincide with county-level data because of different reporting standards.

The agency maintains “regular contact with skilled nursing facilities across the state including daily check-in calls. We monitor daily for non-reporters and follow up with facilities by phone to ensure data is tracked for all facilities,” said spokesman Mark Smith in an email.

California also has required all skilled nursing facilities to test all of their residents and healthcare workers for COVID-19 by June 30 and is reporting that “baseline” data online.

The federal government chose to allow nursing homes not to report COVID-19 cases before early May, although they could voluntarily do so. It appears that New Vista did not report its early cases, because it didn’t have to; they occurred before early May. The home’s COVID-19 deaths may never show up in federal data.

Jean Perez, an administrator for New Vista Nursing and Rehabilitation Center, said “everything is being done per guidelines” in the nursing home’s data reporting. She declined to comment further.

“Nursing homes are mandated to self-report, but enforcement is almost impossible, if there are no inspections on the ground,” said Mike Dark of the San Francisco-based California Advocates for Nursing Home Reform. “What you have is many facilities who see COVID reporting as a business problem that could hurt future profits, so they don’t have an incentive to report. And they’re not being caught.”

The Centers for Medicare & Medicaid Services, which released the federal data, has said that, starting June 8, it may fine skilled nursing facilities hundreds or even thousands of dollars for each week they fail to report.

Dr. Dawn Terashita, associate director of Los Angeles County’s Acute Communicable Disease Control Program, said the data disparities among local, state and federal agencies are an unfortunate consequence of trying to provide as much real-time information as possible to the public.

“This is one of the hazards of giving everyone transparency,” Terashita said. “Sometimes there’s an error because you got the name of a home wrong or a false positive on a test.”

Deborah Pacyna, spokeswoman for the California Association of Health Facilities, an industry group, said nursing home administrators had been calling her group saying the data they reported was incorrectly logged by state public health officials.

But in other cases, nursing homes did not appear to report their data for days, although that has greatly improved in recent months, CalMatters’ data analysis shows. Between 56% and 95% of nursing homes have reported their data to the state on any given day, although compliance rose as the pandemic progressed. It’s difficult to tell whether the homes were failing to report or if the state public health agency wasn’t logging their data.

Engel, the senior advisor to the Council of State and Territorial Epidemiologists, suggests that family members take the current publicly available case data on nursing homes with some skepticism and ask tough questions of nursing home or assisted living administrators before placing a loved one in a home. Families should ask administrators how many COVID-positive residents and staff are currently at the facility, how they are being isolated from uninfected residents, and what specific measures are in place to prevent infection.

“I feel badly for anyone who has to put someone in a nursing home now; that’s a really tough place to be in now during COVID,” Engel said. But, as the pandemic moves into a second wave in the fall and winter, he added, “we think we can get into a place where the data are meaningful, timely, and complete.”