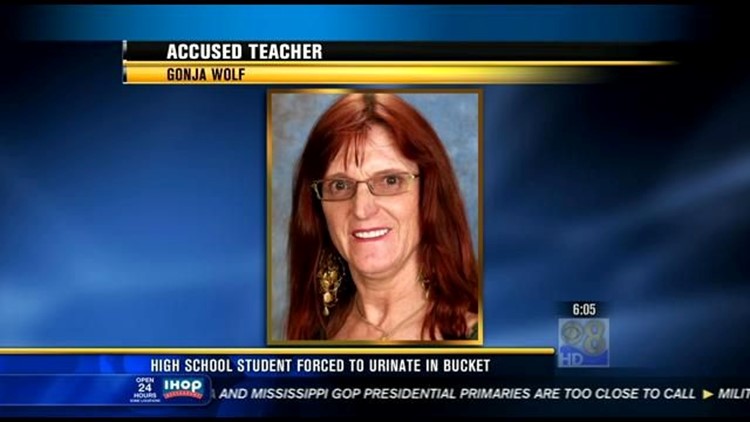 Student says teacher forced her to urinate in bucket

Student says teacher forced her to urinate in bucket

A teacher at Patrick Henry High School is on leave, after a shocking claim. A 14-year-old girl says she was not allowed to go to the restroom, and was forced to urinate in a bucket instead.
Author: Marcella Lee (Anchor/Reporter)
Published: 8:02 PM PDT March 12, 2012
Updated: 2:30 AM PDT March 13, 2012

San Diego (CBS8) – A teacher at Patrick Henry High School is on leave, after a shocking claim. A 14-year-old girl says she was not allowed to go to the restroom, and was forced to urinate in a bucket instead.

The teacher, Gonja Wolf, is listed as an Art teacher on Patrick Henry High's website. The girl says the incident took place during a Freshman Advisory class in February.

A Claim for Damages to Person or Property was filed on behalf of the student, against the San Diego Unified School District and Patrick Henry High School.

It alleges the teacher barred the student from going to the bathroom and directed and ordered her to urinate in a bucket during the class. In the presence of several male classmates, the teacher allegedly told the girl she could not leave the classroom regardless of the urgency of the situation and that she would have to urinate in a bucket. The claim says the teacher told the girl to then empty the contents in an unused classroom sink.

The complaint says this was done to humiliate and disgrace the student, and to deter other students from seeking to go to the bathroom.

The claim lists damages of more than $10,000, and psychological treatment and medical expenses in excess of $25,000.  It is not a lawsuit, but rather a claim, which must be filed against a governmental entity before a lawsuit for monetary damages can be filed.

The school district says the teacher is now on leave. It says a thorough investigation has been conducted and the district is addressing the incident with appropriate and swift action, but can not disclose any details of the case.

A man who answered the door at Gonja Wolf's home told News 8 she has been a teacher for a long time, but said she can not make any comment since the incident is under investigation.