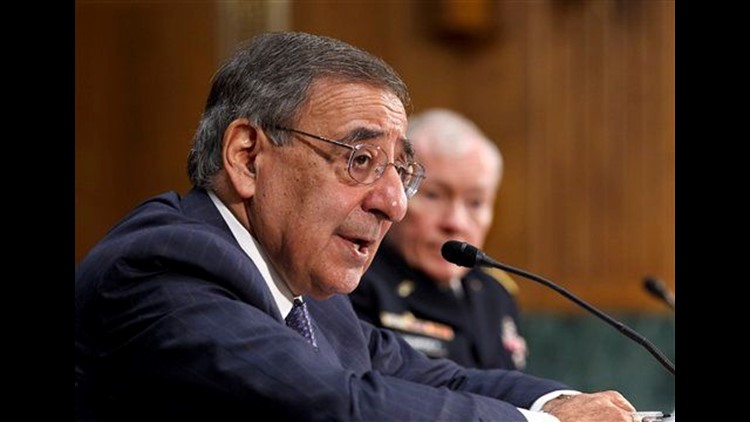 Talk of US military in Syria divides Congress

Talk of US military in Syria divides Congress

President Barack Obama's 2008 rival — Republican Sen. John McCain — has called for the president to launch airstrikes against Assad to force him from power and end the bloodshed. The United Nations estimates that more than 7,500 Syrians have been killed, with hundreds more fleeing to neighboring nations to avoid the slaughter.

Army Gen. Martin Dempsey, the chairman of the Joint Chiefs of Staff, told the Senate Armed Services Committee that Obama has asked the Pentagon for a preliminary review of military options, such as enforcement of a no-fly zone and humanitarian airlifts. He insisted that the military would be ready if the commander in chief made the request.

"What are the potential missions, what is the enemy order of battle, what are the enemy's capabilities or potential enemies? What are the troops we have available, and how much time. So, mission, enemy, terrain, troops and time. That's a commander's estimate," Dempsey said of the initial step.

In Congress, only McCain's closest Senate colleagues have echoed his plea. War-weary Republicans and Democrats have expressed serious reservations about U.S. military involvement in Syria after more than a decade of war in Iraq and Afghanistan, the divisive political fight last summer over U.S. intervention in Libya, and the possibility of an Israeli attack on Iran.

House Speaker John Boehner, R-Ohio, said this week that the situation in Syria is too muddled and military action would be premature, an opinion shared by many House Republicans who challenged Obama last year for dispatching the military to protect Libyans battling to overthrow Moammar Gadhafi. Republican presidential candidate Mitt Romney also said this week that he wasn't prepared to support military action against Syria.

"The fundamental issue that is before us is whether or not the United States will go in and act unilaterally in that part of the world, and engage in another war in the Muslim world unilaterally. Or whether or not we will work with others in determining what action we take," Panetta said.

Still, McCain pressed for military involvement, pointing to Democratic President Bill Clinton's willingness to act during the Bosnian war in the 1990s. He engaged in one sharp exchange with Panetta.

Late last month, Secretary of State Hillary Rodham Clinton traveled to Tunisia to rally the Friends of Syria, 60 U.S, Arab and European nations determined to force Assad and his allies to agree to a democratic transition.

Obama has resisted calls to step into the turmoil in Syria to stop Assad's crackdown on protesters. He told a news conference Tuesday that the international community has not been able to muster a campaign against Syria like the one in Libya that ousted Gadhafi. Russia, which is involved in arms sales with Syria, and China have resisted U.N. efforts to criticize Syria.

Obama's strategy has been to rely on sanctions and international diplomatic isolation to pressure Assad into handing over power.

Assad's regime did allow U.N. humanitarian chief Valerie Amos into Baba Amr on Wednesday; she found that most people already had fled after a military siege.

In a cautionary note, Panetta and Dempsey described a well-armed Syria that bears little resemblance to what the U.S. military and its allies faced in Libya. Syria's air defenses are five times more sophisticated than Libya's, and its chemical and biological weapons stockpile is 100 times larger than Libya's. Suppressing the air defenses would require a sustained air campaign over an extended period of time with a significant number of aircraft. The United States would have to lead the effort, Dempsey said.

One complication is the location of the air defenses. Panetta said they are in populous neighborhoods and air attacks could mean scores of unintended deaths.

"We also need to be alert to extremists," Dempsey said, and other hostile actors, including Iran, which he said "has been exploiting the situation and expanding its support to the regime. And we need to be especially alert to the fate of Syria's chemical and biological weapons. They need to stay exactly where they are."

McCain — along with Sens. Lindsey Graham, R-S.C., and Joe Lieberman, I-Conn. — also raised the possibility of arming the rebels. But Republican Sen. Susan Collins of Maine expressed reservations, citing Secretary of State Hillary Rodham Clinton's recent comment that "if we arm, who are we arming?"

Some reports have suggested that al-Qaida is backing the Syrian opposition.

"If the United States or another country or even an international coalition chose to arm opposition groups in Syria, what's your assessment of the risk that we might be taking that we could end up arming terrorist groups or other enemies that are hostile to the United States or to Israel or to other allies in the region?" Collins asked.

At the State Department, Clinton said the United States is doing what it can to support the opposition, which still isn't unified.

"So we do think it is appropriate to help the opposition, but where we're focused on is how we help them be more unified, communicate more clearly, have a message to all their Syrian counterparts who are not yet convinced that it is in their interests for Assad to go," she said.