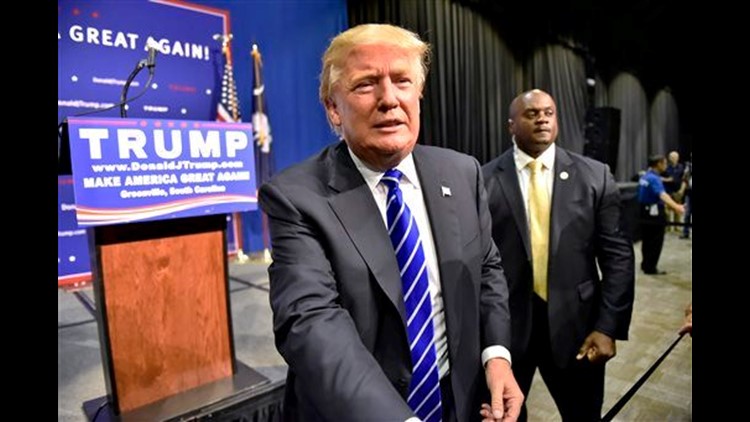 WASHINGTON (AP) — The Republican candidates for president started putting pen to paper on Thursday, pledging not to mount a third-party bid as they awaited news that front-runner Donald Trump may do the same.

The billionaire businessman roiled the race for the GOP nomination when, in response to the first question at the opening debate of the 2016 campaign, refused to promise to back the party's nominee if he fell short.

"Every candidate has to make the decision about do you really want the nomination of our party or do you want to have it both ways," New Jersey Gov. Chris Christie said Thursday during an appearance on Fox News, during which he signed the pledge.

"I've made my decision. I want the nomination of our party and I'll support whoever the nominee is if it's not me. That's the decision Donald has to make."

A Republican official, speaking on condition of anonymity to in order to discuss private conversations, said there were signals indicating Trump was likely to sign the pledge.

If not for Trump, the need for such a loyalty oath probably would not exist. "I'm, you know, talking about a lot of leverage," he said at the first debate in refusing to pledge then not to run as an independent. There were no doubts about the intentions of the GOP's other major presidential contenders headed into the debate, and they quickly lined up Thursday to sign.

"The RNC clearly felt it had to box Trump into a decision," said Doug Watts, a spokesman for retired surgeon Ben Carson. "We just sort of shrugged our shoulders, and that's the end of that."

Trump planned to meet with Republican National Committee chief Reince Priebus at midday, with a news conference planned for 2 p.m. at his Manhattan skyscraper.

Trump campaign manager Corey Lewandowski on Thursday refused to confirm his boss' plans, and Christie cautioned it would be unwise to make any assumptions about what Trump planned to do.

"I have no idea," Christie said. "I've known Donald Trump long enough to know I have absolutely no idea."

A third-party bid by Trump, whose lead in what are still very early polls has held strong throughout the summer, would likely harm the GOP's efforts to take back the White House after eight years of Democratic President Barack Obama.

"Ross Perot ended up giving us the first Clinton, and I think if Trump does this, he could give us another Clinton," Kentucky Sen. Rand Paul said on "CBS This Morning," referring to Democratic front-runner Hillary Rodham Clinton and her husband, former President Bill Clinton.

"I think he should state his intentions if wants to be a part of a third party," Paul added. "I have no objection to him doing that, but he should make the decision now."

RNC officials have been working with Trump's campaign to avoid such a scenario, and in in recent days, Trump has hinted that the lobbying was beginning to work. "I think a lot of people are going to be very happy," he said Saturday in Tennessee.

The meeting between Trump and Priebus was confirmed by two RNC officials who weren't authorized to discuss the plan publicly and requested anonymity.

The RNC's pledge asks candidates to promise to "endorse the 2016 Republican presidential nominee regardless of who it is." Further, it asks them to pledge "that I will not seek to run as an independent or write-in candidate, nor will I seek or accept the nomination for president of any other party."

"It is, more than anything, your word," former technology executive Carly Fiorina said Thursday on CNN's "New Day." ''And I would presume that somebody running for president would like to signal to the American people, and most especially right now to Republican primary voters, that their word can be trusted."

Trump's decision about the pledge comes in the midst of an ongoing fight with Bush, who on Thursday on ABC's "Good Morning America" charged that Trump was "trying to insult his way to the presidency and it's not going to work."

Bush said Trump's policies are more in line with Clinton than Republicans. The day before, Trump told Breitbart News that Bush, who speaks fluent Spanish, should "set the example" by speaking English while in the U.S.

Even if Trump does sign the pledge, it's unlikely the GOP's challenges with Trump are resolved.

The pledge is not legally binding, and Trump could always change his mind — particularly if GOP establishment leaders take aggressive steps to thwart his candidacy in the coming months.