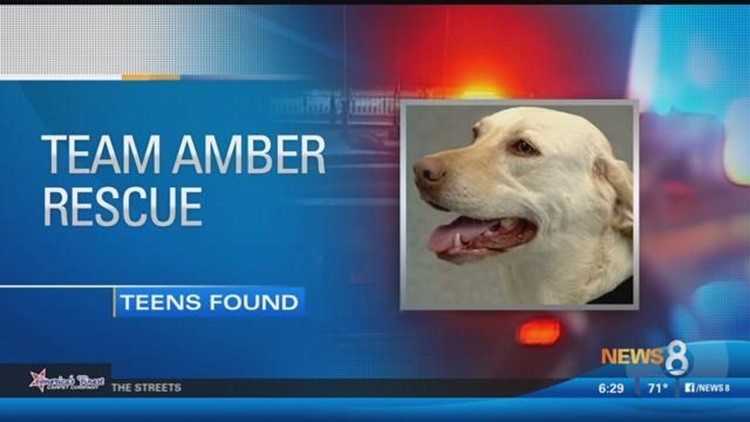 SAN DIEGO (NEWS 8) – The mother of slain teenager Amber Dubois helped Escondido Police track down two missing teenagers with the help of her search dog named after her daughter.

“I am glad I could give back to them because they did so much to me while I was looking for Amber,” said Carrie Dubois.

On Sunday, Carrie McGonigle and team Amber Rescue stepped in to help search for the at risk teens with search dogs – Amber and Marshall.

Amber was named after Carrie’s daughter – who was kidnapped and killed while walking to Escondido High School in 2007.

After two hours of searching, the dogs led the search team to Destiny and Blake who were found safe and sound in Kit Carson Park.

It was through the generosity of San Diegans that Amber is able to do what she does.

In 2015, News 8 viewers raised $15,000 for Amber to have extensive knee surgery, but the yellow lab was put out of commission again last year after an infection led to one more surgery. She has since then healed and returned back to work.

“I want to say thank you very much for believing in me and my dog. Without help, we would not have been able to have surgery and Amber would be crippled at home,” said Carrie.