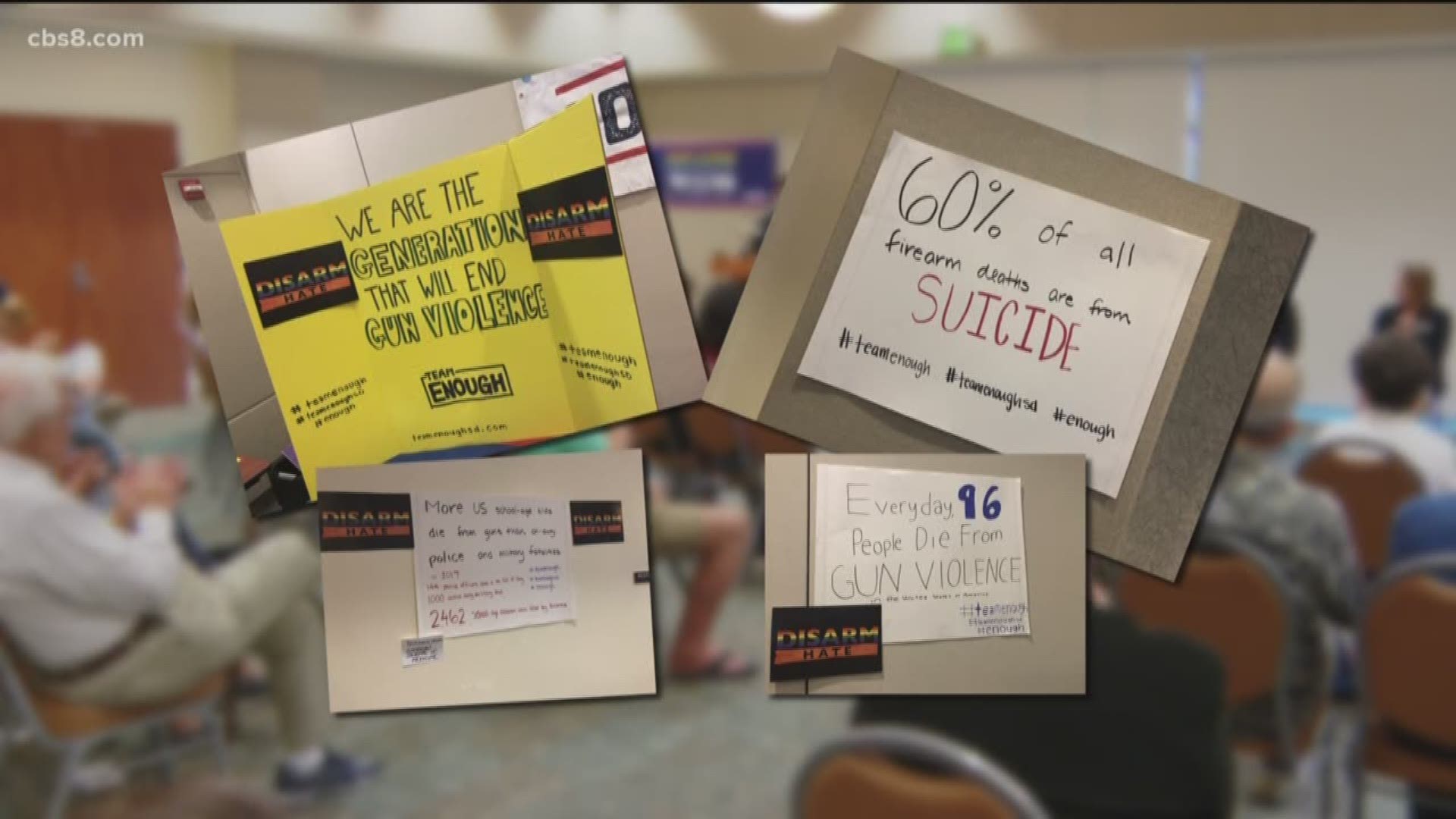 ENCINITAS, Calif. — Student volunteers with the organization Team Enough hosted an event Friday to call on elected officials to take action to end what they call an epidemic of gun violence. "Hear Our Voice – A Team Enough-Led Call to Action” was held at Encinitas Community Center with a goal of bringing together community leaders and community members to work on "effective ways" leaders can take action to create sensible gun laws, according to organizers.

"As young people, we need to take our future into our own hands and make a difference in gun violence prevention," said Carlsbad High School junior Lena McEachern who says she wants gun violence restraining orders.

"By having these restraining orders, people who have exhibited violent acts in the past will not be able to own a gun for a temporary period."

Levin who represents North County has pushed for stricter gun laws and was involved with legislation for universal background checks that passed the House of Representatives but stalled in the Senate. There have been hundreds of mass shootings since and gun rights advocates continue to fight for their constitutional right.

"It's long past time that we invest in research to better understand what is happening with regard to gun violence," Levin said Friday.

Students who participated in the event created posters and displays that included statistics on gun violence in the United States.

"With the Parkland shooting, it made me realize that teenagers have power and that was a moment when I decided to use my voice to make a change," Zdanowski said.

"If we can pass it here in San Diego then we replicate this to other fairgrounds across California and make sure the state is not complicit in adding more guns in our community," Gloria said.

In June, a federal judge issued an injunction on the Del Mar Fairground's temporary ban on gun shows. Crossroads of the West, one of the largest gun shows, is scheduled to return on Sept. 27 and 28.

As school begins students say there is an urgency to prevent another school shooting.

"We have to start with our voices and then use our votes to make change," Zdanowski said.

Team Enough is a student-driven group dedicated to gun violence prevention. The San Diego chapter of the organization hosted Friday's event, with the support of their parent organization Brady United, to coincide with the start of the school year, “demonstrating the urgency with which young people need gun violence to stop.”

“The month of July was the deadliest for mass shootings ever, and we start school this week with that fear in our minds,” said Zdanowski, one of several leaders of Team Enough San Diego. “What’s worse is all the daily gun violence that never makes the headlines. We hear from more and more fellow citizens and voters looking for some way to help, and this is an opportunity to show them how.”

Last month, the San Diego City Council approved an ordinance requiring gun owners to store their weapons in a locked container or disable them with a trigger lock when not in use or being worn on their person. Encinitas Mayor Catherine Blakespear announced at Friday's event that the Encinitas city council will vote in September on a similar ordinance for their city.