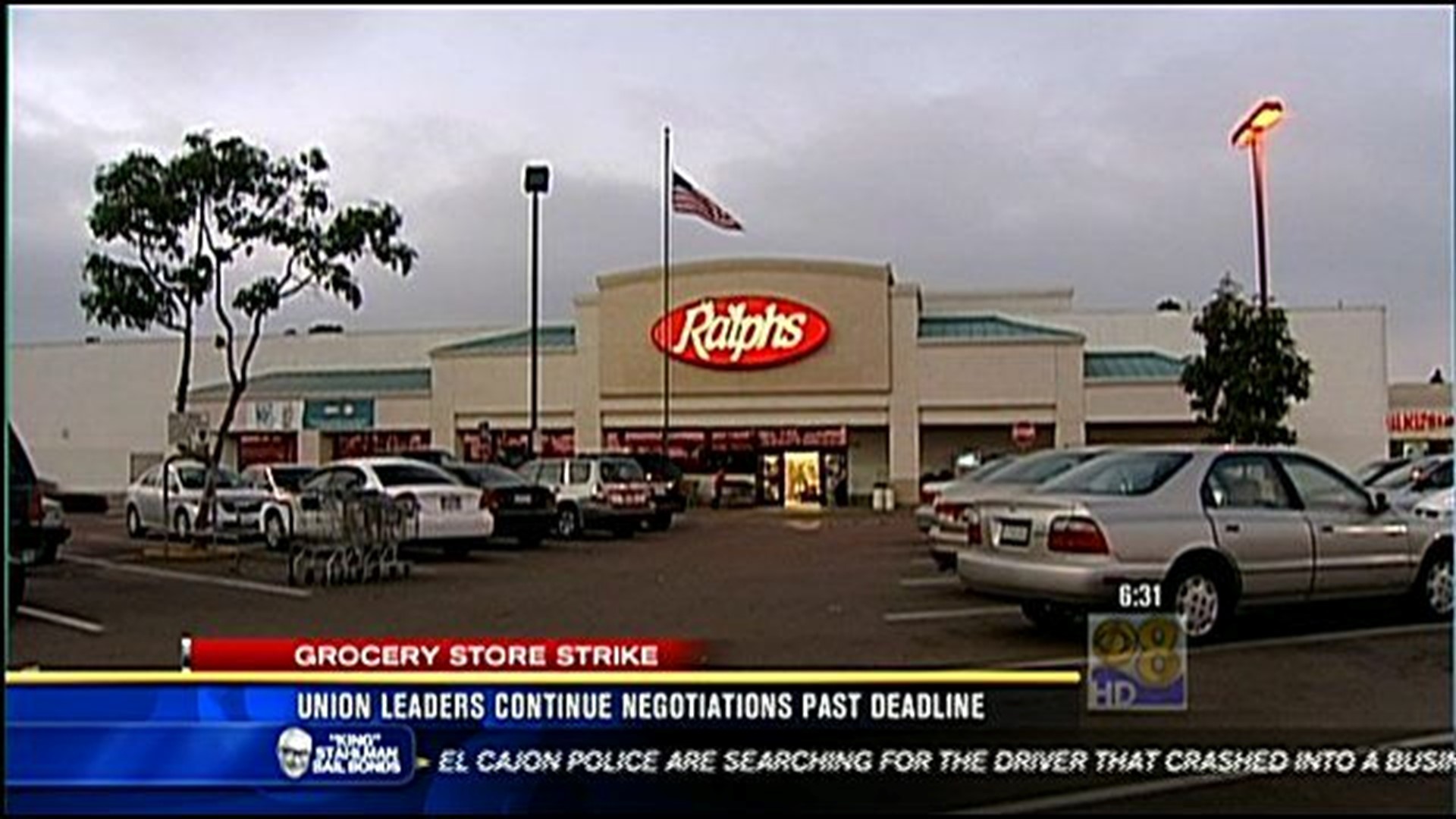 LOS ANGELES (AP) — Union leaders said Monday they reached a tentative deal with some of Southern California's largest grocery chains that would head off the threat of a strike by more than 60,000 workers.

"Thanks to the unity of our members and the hard work of our negotiating team, we were successful in bargaining an agreement that grocery workers can be proud of," Conger said in a statement.

Members were set to vote on the deal Saturday. The union said details won't be publicly released until the vote is taken.

Some 62,000 grocery employees have been working without a contract since March, while in discussions with negotiators for The Vons Cos. Inc.; Ralphs Grocery Co., a subsidiary of The Kroger Co.; and Albertsons, owned by Supervalu Inc.

The three companies released a joint statement lauding the deal, which they said "continues to preserve good wages, secure pensions and access to quality, affordable health care — while allowing us to be competitive in the marketplace."

Both sides in the dispute announced in July that they had reached a tentative agreement on the employers' contributions to pension benefits, but payments to the union health care trust fund remained a major sticking point.

Those leaders said they were responding to what they characterized as the chains' delaying tactics when they issued the required 72-hour notice Thursday evening to cancel the contract extension under which they had been working since March.

But after the Sunday evening deadline came and went with neither a strike nor a deal, store employees returned to work on Monday.

A four-month strike and lockout that began in 2003 cost Ralphs and other grocery chains an estimated $2 billion.

THIS IS A STORY UPDATE. Previous stories are below.

SAN DIEGO (CNS) - A strike by 10,000 grocery workers in San Diego County was averted Monday when union negotiators struck a tentative agreement with the owners of Albertsons, Ralphs and Vons/Pavilions.

The two sides faced a 7 p.m. Sunday strike deadline, but labor talks continued through the night, with both sides indicating that some progress was being made.

About 62,000 employees of the chains throughout Southern California - including those in San Diego - have worked without a contract for six months, and the two sides were in dispute over worker health care costs.

Details of the tentative agreement were not released, but union officials said the pact would protect workers' health care.

"We have attained our most important goal, which was continuing to provide comprehensive health care to the members and their families," according to a statement by union leaders, including Mickey Kasparian of the United Food and Commercial Workers Local 135, in San Diego.

The deal still needs to be ratified by union members. That process was expected to begin later this week.

Officials with the three grocery chains issued a joint statement saying the tentative deal "continues to preserve good wages, secure pensions and access to quality, affordable health care - while allowing us to be competitive in the marketplace."

"We appreciate the hard work, support and patience that many different people have shown during the past eight months, and particularly the past few weeks."

A 141-day grocery workers' strike in 2003-04 cost the stores an estimated $1.5 billion and forced many workers to seek different employment.

THIS IS A BREAKING NEWS UPDATE. Previous stories are below.

A strike deadline has now passed for grocery workers, but no one is walking off the job just yet.

The 72-hour notice period required before calling a strike ended shortly after 7 p.m. Sunday, but union leaders say negotiations are continuing. They say representatives will remain at the bargaining table as long as they feel progress is being made.

Some 62,000 grocery employees have been working without a contract since March, while in discussions with grocery chains Vons, Ralphs, and Albertsons.

THIS IS A BREAKING NEWS UPDATE. Previous stories are below.

SAN DIEGO (CBS 8) - Workers for the three major grocery chains are set to be on strike Sunday night if a deal isn't reached.

Union workers at Vons, Ralphs and Albertsons have given a 72-hour strike notice and could walk off the job Sunday at 7 p.m., if a deal isn't reached, including an agreement on healthcare.

Local shoppers would be left with a tough choice of whether or not to cross the picket lines.

"I'd have to go to Costco or Food 4 Less. I wouldn't cross the picket line. I wouldn't. I would find somewhere else to shop until they resolved their issues," one local shopper said.

Ralph's says it will close all of its stores during a strike. Albertsons says it may close 100 stores for some or all of the strike.