The Latest: Saudis say more than 700 dead in hajj stampede

The latest developments from a stampede on the third day of the annual hajj pilgrimage in Saudi Arabia. 3:45 p.m. Saudi Arabia's civil defense directorate says 717 people were killed in a crush of ... 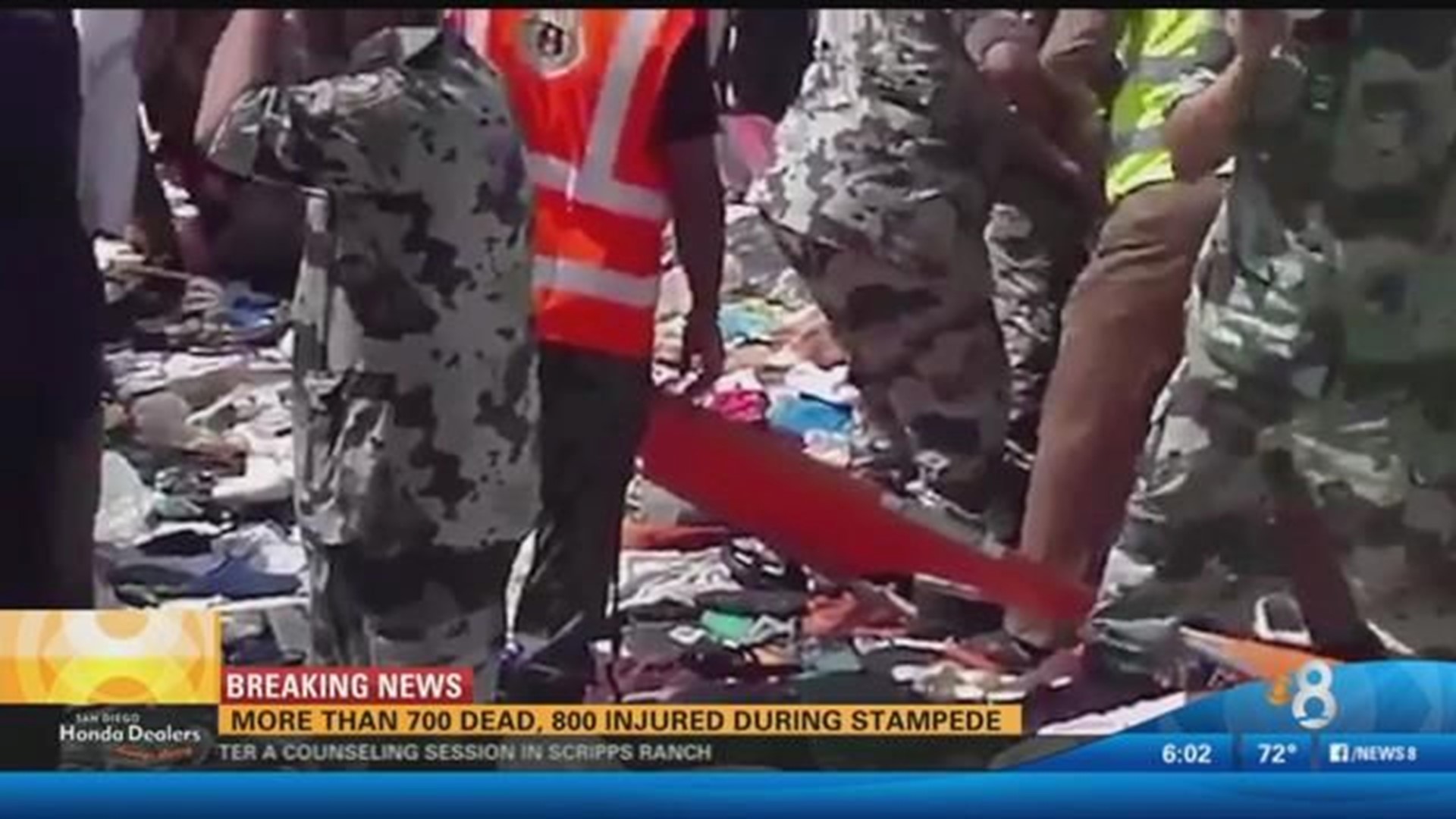 MINA, Saudi Arabia (AP) — A horrific stampede killed at least 717 pilgrims and injured hundreds more Thursday on the outskirts of the holy city of Mecca in Saudi Arabia, the deadliest tragedy to strike the annual hajj pilgrimage in more than two decades.

At least 863 pilgrims were injured in the crush, said the Saudi civil defense directorate, which provided the death toll. The tragedy struck as Muslims around the world marked the start of the Eid al-Adha holiday.

It was the second major disaster during this year's hajj season, raising questions about the adequacy of measures put in place by Saudi authorities to ensure the safety of the roughly 2 million Muslims taking part. A crane collapse in Mecca nearly two weeks earlier left 111 people dead.

Many of the victims were crushed and trampled to death as they on their way to perform a symbolic stoning of the devil by throwing pebbles against three stone columns in Mina, a large valley about 5 kilometers (3 miles) from Mecca that has been the site of hajj stampedes in years past. The area houses more than 160,000 tents where pilgrims spend the night during the pilgrimage.

Two survivors interviewed by The Associated Press said the disaster began when one wave of pilgrims found themselves heading into a mass of people going in another direction.

"I saw someone trip over someone in a wheelchair and several people tripping over him. People were climbing over one another just to breathe," said one of the survivors, Abdullah Lotfy, 44, from Egypt. "It was like a wave. You go forward and suddenly you go back."

Lotfy said that having two flows of pilgrims interacting in this way should never have happened. "There was no preparation. What happened was more than they were ready for," he said of the Saudi authorities.

Saudi Arabia takes great pride in its role as the caretaker of Islam's holiest sites and host to millions of pilgrims annually. But the hajj poses an immense logistical and security challenge for the kingdom given the sheer number of hundreds of thousands of people — from differing linguistic and cultural backgrounds, many of whom have saved for years for a once-in-a-lifetime opportunity — intent on following the same set of rituals at about the same time.

Another survivor, Ismail Hamba, 58, from Nigeria, recalled falling down and then being trampled over by marching pilgrims.

"It was terrible, it was really, really terrible," he said.

Thursday's tragedy struck during a morning surge of pilgrims at the intersection of streets 204 and 223 as the faithful were making their way toward a large structure overlooking the columns, according to the Saudi civil defense directorate.

The multi-story structure, known as Jamarat Bridge, is designed to ease the pressure of the crowds and prevent pilgrims from being trampled.

Ambulance sirens blared and helicopters hovered overhead as rescue crews rushed the injured to nearby hospitals.

More than 220 rescue vehicles and some 4,000 members of the emergency services were deployed soon after the stampede to try to ease the congestion and provide alternative exit routes, according to the directorate.

Amateur video shared on social media showed a horrific scene, with scores of bodies — the men dressed in the simple terry cloth garments worn during hajj — lying amid crushed wheelchairs and water bottles along a sunbaked street.

Survivors assessed the scene from the top of roadside stalls near white tents as rescue workers in orange and yellow vests combed the area.

International media covering the hajj, including The Associated Press journalists in Mina, were restricted from visiting the site of the accident for several hours and from immediately leaving an Information Ministry complex where the press is housed during the final three days of the pilgrimage per government rules.

Photos released by the directorate on its official Twitter account showed rescue workers helping the wounded onto stretchers and loading them onto ambulances near some of the tents.

Dozens of bodies could still be seen in the streets at dusk despite the presence of ambulances and refrigerator trucks to haul away the dead.

Some 2 million people are taking part in this year's hajj pilgrimage, which is an obligation of every able-bodied Muslim. The pilgrimage began in earnest Tuesday.

Saudi authorities take extensive precautions to ensure the security of the hajj and the safety of pilgrims. There are about 100,000 security forces deployed this year to oversee crowd management and ensure pilgrims' safety during the five-day pilgrimage.

At Mina specifically, authorities have put measures in place over the years to try to alleviate the pressure posed by masses of pilgrims converging on the site of the stoning ritual.

Officials use surveillance cameras and other equipment to limit the number of people converging on the site, and the Jamarat Bridge has multiple exits to facilitate the flow of people.

But tragedies are not uncommon.

The death toll from Thursday's crush far exceeded that of a similar incident in 2006, near the same site, when more than 360 pilgrims were killed in a stampede. Another stampede at Mina in 2004 left 244 pilgrims dead and hundreds injured.

The deadliest hajj-related tragedy happened in 1990, when at least 1,426 pilgrims perished in a stampede in an overcrowded pedestrian tunnel leading to holy sites in Mecca.

The latest tragedy is certain to have touched many different countries as the victims likely included pilgrims of different nationalities.

Sudanese pilgrim Mahmoun Mahmoud, 55, witnessed what he said appeared to be pilgrims from many different countries.

At least 47 Iranian pilgrims perished and at least 60 were injured in Thursday's crush, according to the chief of the Iranian hajj organizing agency. The official, Saeed Ohadi, blamed Saudi Arabia for "safety errors" and said in comments to Iranian state TV that "mismanagement by the Saudis" led to the tragedy.

Thursday's crush happened less than two weeks after a giant construction crane came crashing down on the Grand Mosque in Mecca, the focal point of the hajj. The Sept. 11 accident killed at least 111 people and injured more than 390.

Authorities blamed the crane collapse on high winds during an unusually powerful storm, and faulted the construction giant Saudi Binladin Group, which oversees construction at the mosque, for not following operating procedures.

And last Thursday, more than 1,000 fled a fire in an 11-story Mecca hotel that left two people injured.