Funeral plans are being made for San Diego police Officer Jeremy Henwood. 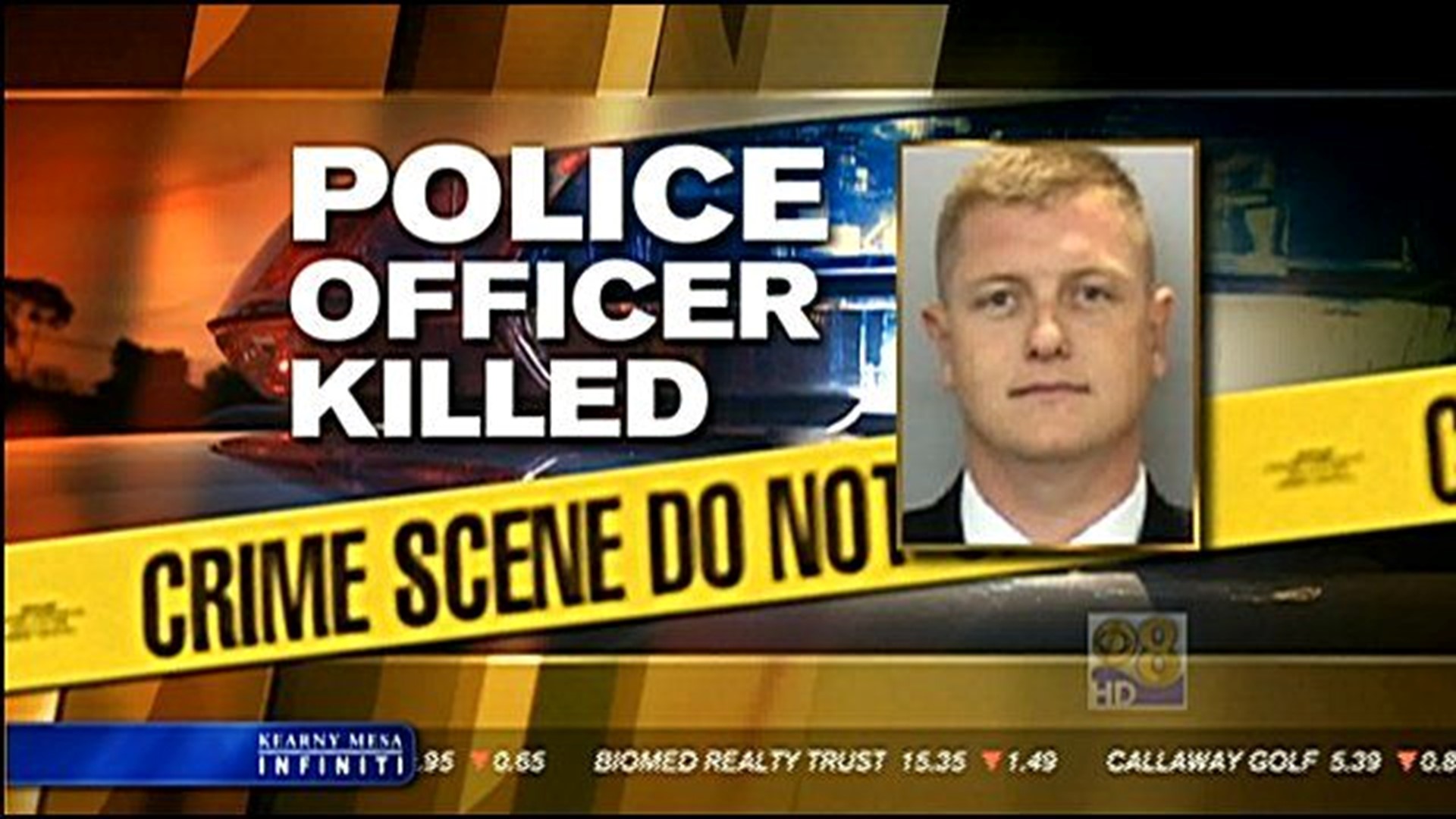 SAN DIEGO (AP) — A Marine combat veteran who was shot in the head while patrolling San Diego streets as a police officer was remembered Friday as a generous and upbeat leader whose dedication to public service inspired those around him.

Jeremy Henwood, 36, was posthumously promoted to major in the Marine Corps Reserve at a funeral service attended by more than 3,000 mourners, including California Gov. Jerry Brown.

Henwood died six months after returning from Afghanistan when a motorist flashed his headlights behind his patrol car, as if to seek help, then pulled alongside and shot him.

Police Chief William Lansdowne said a surveillance video taken at a fast-food restaurant two blocks from the shooting showed the officer had just bought a meal for a 10-year-old boy who was watching him in awe.

"You see this little boy with a giant grin, saying 'thank you, thank you, officer,'" Lansdowne said.

Robbie Henwood Jr. told mourners that he tried in vain to get his older brother to follow his footsteps into federal law enforcement, which promised better pay and an opportunity to move around. He didn't understand why Jeremy — at the time a Marine with two tours in Iraq on his resume and a chest full of military medals — wanted to be a rookie police officer.

"He wouldn't hear it, he wouldn't discuss it. Jeremy absolutely loved San Diego. He loved the PD," Robbie Henwood said. "Money meant nothing to him."

Jeremy Henwood, a Canadian native who grew up in the San Antonio area and graduated from the University of Texas, joined the Marines in 1995 and the San Diego police force in 2007.

In February, he returned from his third combat tour, which included seven months leading about 160 Marines in Afghanistan's northern Helmand province. He was a captain in the Marine Corps Reserve, assigned to Bravo Company in the Combat Logistics Battalion II, based at Camp Lejeune, N.C.

During his last tour, he led an 11-mile-long convoy to bring supplies to a remote U.S. base and devised new tactics to escort Afghan government vehicles in hostile territory. His Marines survived improvised explosive devices and small-arms attacks.

"That was really all that mattered to him. His biggest regret was that several were injured. He gave of himself in every way possible," said Bonanno.

Friends and colleagues said Henwood never complained, and his boyish, happy-go-lucky enthusiasm rubbed off on everyone around him. When Henwood called, Bonanno answered the phone, "Hey, Motivator."

Henwood, a skydiver who skied, flew airplanes and scuba-dived, loved his police work, except for writing reports. Capt. Lawrence McKinney, who supervised him at the department's Mid-City division, said Henwood was motivated by his recent tour in Afghanistan.

"Taking the bull by the horns would be an understatement," McKinney said. "He was blazing."

Police shot and killed Dejon White in a confrontation minutes after Henwood was shot on Saturday. Police said White, 23, shot another man in the parking lot of another restaurant shortly before he attacked Henwood.

Henwood is survived by his parents, Robbie and Beverley, and his younger siblings, Robbie Jr. and Emily.

THIS IS A STORY UPDATE. Read CBS 8's previous story below.

Henwood was gunned down the night of Saturday, August 6 while on patrol in City Heights. Thirty-six-year-old Henwood was a four-year veteran on the police force and a Marine reservist who had served three tours of duty overseas. According to Police Chief William Lansdowne, Henwood died at 1:42 a.m. Sunday at Scripps Mercy Hospital.

"There was a pretty big push to get him to go home to Texas and maybe get involved in law enforcement there," said Todd Jarvis the SDPD Mid City acting captain.

But Henwood told his family San Diego is where he needed to be. He served double duty, as an officer of the law in San Diego and as an Officer in the Marine Corps in Afghanistan.

"It's just ironic to me that a man can serve his country and be overseas, in harms way three times and this happens to him on the streets of our city," continued Jarvis.

Meanwhile, the mother of Dejon White, the man police say shot Henwood in the head with a shotgun, sent out her condolences to his family and to Martin Hana who was also shot in the face by her son at an In and Out Burger in El Cajon, according to police.

"I just want to apologize to the two other families," said Tamica Berason. "I'm sad that this happened."

Officer Henwood's family had dinner Monday night with one of Jeremy's fellow Marines who lives in San Diego. But the family is still asking for privacy at this time.

The memorial service for Officer Henwood is scheduled for 10 a.m. Friday, August 12 at The Rock Church located at 2277 Rosecrans Street in San Diego. Before the service, there will be a police motorcade from the Qualcomm Stadium parking lot to the church.

The San Diego Police Officers Association has also established a trust fund for Officer Henwood's family. Donations can be mailed to:

Checks can be made payable to the San Diego Police Officers Association (SDPOA). Please write "Officer Jeremy Henwood" in the memo line. All donations will go directly to the family. You can also donate online by click here.