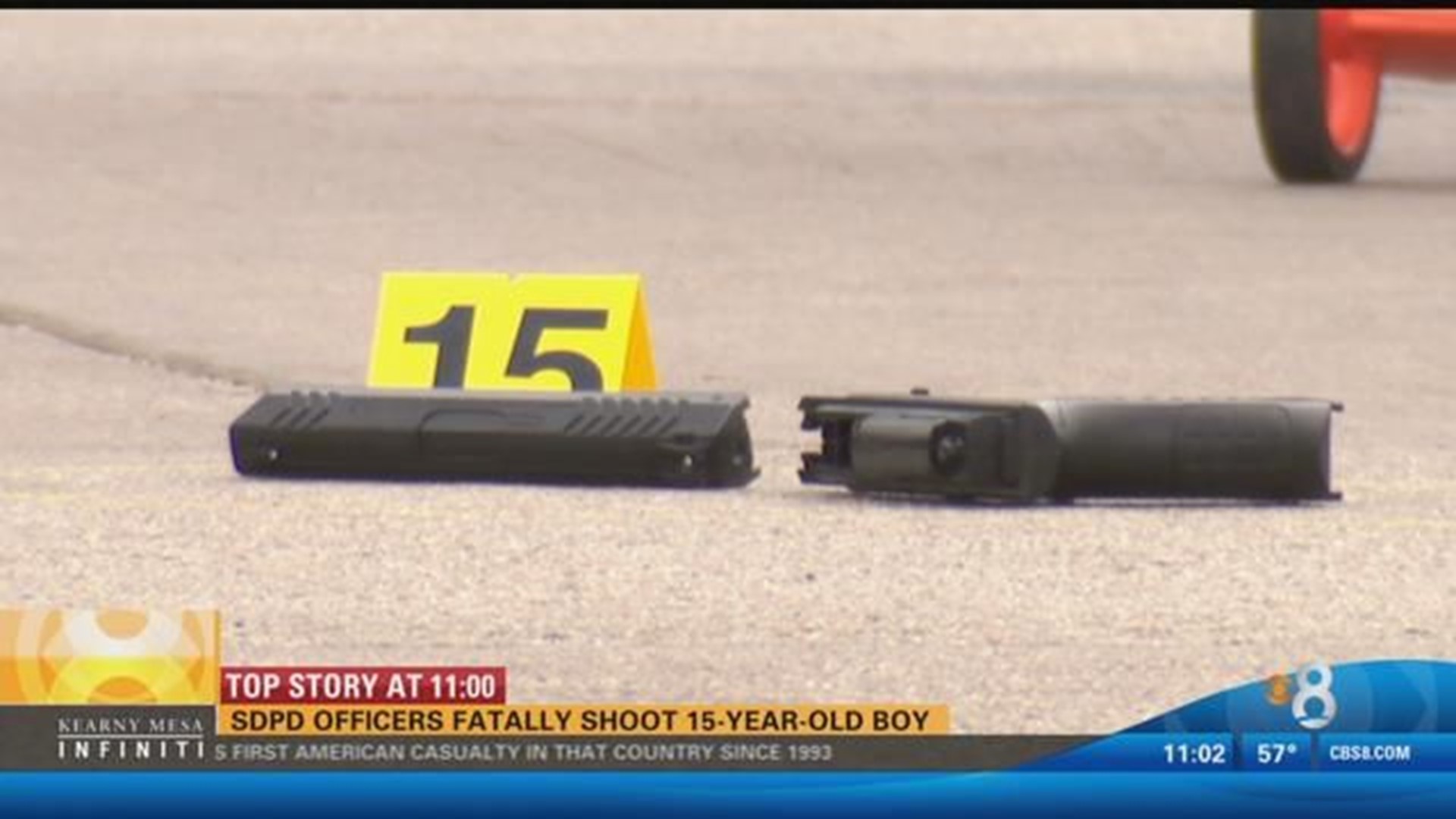 SAN DIEGO (CBS 8) - San Diego police officers shot and killed a 15-year-old Torrey Pines High School student armed with a BB gun Saturday morning, after he apparently called 911 to request officers check the welfare of a male juvenile in the parking lot at the front of the campus, according to homicide detectives.

Officers, including a juvenile service team officer from the San Diego Police Department's Northwestern Division, responded shortly after 3:27 a.m. to 3710 Del Mar Heights Road in the Carmel Valley neighborhood of San Diego, where the caller said the juvenile was unarmed, according to homicide Lt. Mike Holden.

"As the officers exited their patrol car, the subject pulled a handgun from his waistband and pointed it directly at one of the officers,'' Holden said. "Both officers drew their weapons while repeatedly giving the male commands to drop his handgun.''

The boy refused to comply with the officers' commands to drop the gun, and instead continued to point it at the one officer and then began walking toward the same officer, according to Holden.

"The officers gave additional commands to the male to drop the handgun and the subject again refused to comply,'' Holden said. "Fearing for their safety, both officers fired their weapons at the male striking him numerous times.''

The officers immediately began life-saving measures on the boy and called for paramedics. The boy was taken by ambulance to Scripps Memorial Hospital, where he was pronounced dead, according to Holden.

"The preliminary investigation indicates the original reporting party was in fact the decedent,'' Holden said. "The handgun used by the male has been identified as a semi-automatic BB air pistol.''

The boy has been identified as a resident of the neighborhood, according to Holden. His family was notified, but his name was not released because he is a juvenile.

The officers who shot the suspect were a 28-year veteran and a 4-year veteran of the San Diego Police Department. Their names will be released in a few days per SDPD protocol and they will be reassigned to desk duty pending an internal investigation.

The shooting occurred just hours before students were to arrive on campus to take the SAT college entrance exam.

About eight hours after the shooting, the San Dieguito Union High School District issued a statement on its Facebook page addressed to families from Superintendent Eric Dill regarding a "saddening incident at Torrey Pines High School.''

"Our hearts go out to the student, his family, and his friends,'' the letter said.

"The details of the situation are still unfolding, but whatever they are, this event is very traumatic for our  students, staff, families, and community. A crisis response team will be on the TPHS campus on Monday to support students, staff, and parents as needed,'' Dill said in the letter. "I know this is difficult, but we ask that you please refrain from conjecture or spreading rumors.

"This is a difficult time for the family and we need to let them mourn. Again, if you need to talk to someone about this or just need a place to go to mourn and process this tragedy, counseling services will be available at all of our schools on Monday for anyone who feels they need it. As a community, we have a shared responsibility to care for one another. Please rest assured that we will do everything possible to maintain our daily routine while supporting each other as we deal with this sad event.''

The incident was captured on video by body cameras the officers were wearing at the time.