Two people were killed in head-on crash, as the driver of a stolen car sped away from deputies and veered into oncoming traffic near Pauma Valley Sunday. 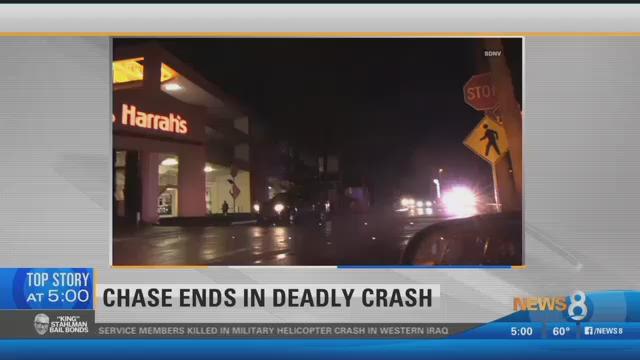 It started when sheriff's deputies spotted a stolen Honda Accord as it pulled out of a parking lot at Harrah's Rincon Casino around 1 a.m. in the area just north of Valley Center.

Deputies chased the car – which was reported stolen from Escondido a few days ago - for less than a minute.

The driver took off speeding on Valley View Road and crashed about 1/5 of a mile away after deputies had ended the chase.

Deputies said they had terminated the pursuit because they had a helicopter overhead and the roadways were wet.

According to deputies, the 22-year-old driver of the Honda hit a curb, lost control and was hit by a white sedan traveling the other direction.

Medics pronounced the man and his front passenger dead at the scene.

They then turned their attention to a third man in the back seat.

He was trapped by the impact but was conscious.

Firefighters managed to free him, and he was taken to the hospital complaining of injuries to his leg.

Meanwhile, other first responders treated the 21-year-old woman who was driving the white car.

Deputies say she was on her way to work at the casino.

She suffered an injury her arm and was shaken up but was otherwise OK.

She was taken to an area hospital for treatment.

It's not known why the driver refused to stop.

Although deputies say evidence in the car – namely some beer bottles - might provide a clue.

Content warning: Video below is raw footage of the police chase and aftermath of the collision. Images include injured parties and may be considered graphic to some viewers.