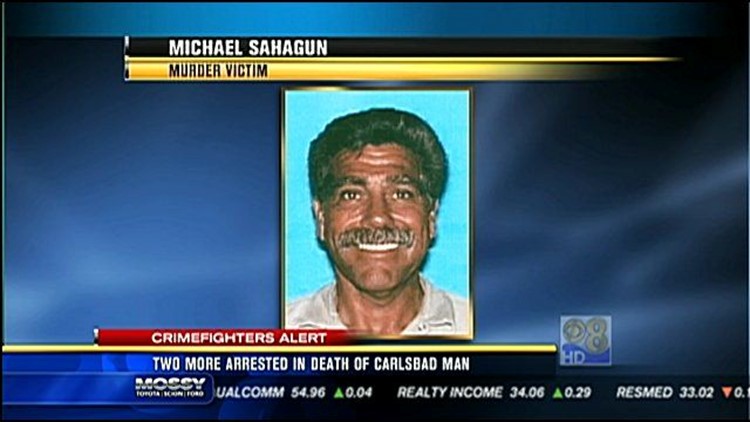 Jason Breer, 40, and Marilyn March, 25, were caught Saturday by Mexican authorities and U.S. Customs agents who handed them over to Carlsbad police, who jailed the pair in the April 1 shooting death of Michael Sahagun, according to Carlsbad sergeant who would give his name only as P. Pascual.

Breer was booked on suspicion of murder, residential robbery and conspiracy, while March was booked as an accessory to the crime, Pascual said.

Sahagun died from a shotgun blast to his chest inflicted in a pre-planned robbery at his home in the 3500 Valley Street, police said. Officers found him fatally wounded in a garage.

SWAT officers arrested Grant Hunter, 23, Gary Gomez, 26, and Mercedes Yorba, 19, at an Oceanside hotel April 2. Hunter and Yorba, who allegedly targeted the victim, were charged with murder. Gomez was charged as being an accessory after the fact.

Police arrested Joseph Verkade, 34, the suspected shooter, along with Heather Strauch, 32, and Michael Gault, the alleged driver to and from the attack on April 11.

The three were arrested after a search of a San Diego home turned up evidence associated with the crime. All three were charged with murder, robbery and conspiracy. Verkade was also charged with second degree burglary and personal use of a firearm. All three pleaded not guilty and remained jailed.